Build your bond through play Toys are valuable learning tools and can help you to forge a trusting relationship with your dog, says Carol Price.

Last month we looked at the critical role play has in dogs’ lives, in both preparing them for real life, and in building social bonds. From playing with each other as young puppies, dogs move on to their new ‘human’ homes, and it is then that we can take over their ongoing social development and training, with the use of games and toys. When people first get puppies, playing with them in some way or form may seem the most natural thing in the world. But not everyone appreciates the way toys can also become valuable learning tools, in terms of what dogs learn about us when we use them in play, and what we can teach them. 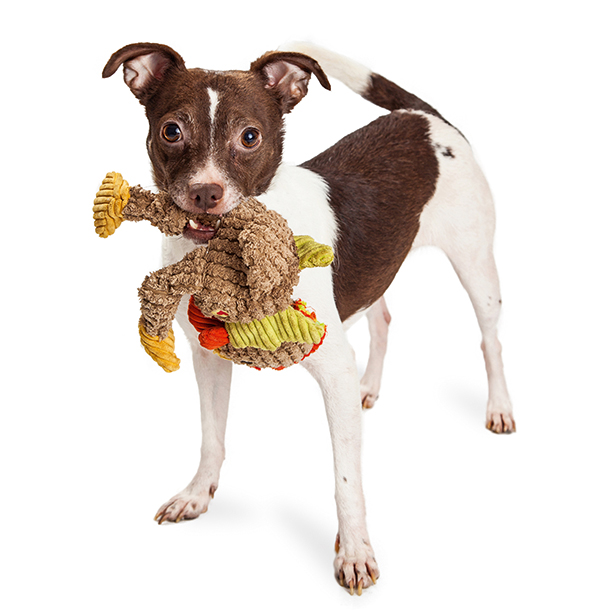 Bear in mind that terrier breeds and crosses can be very destructive with their toys.

It is important to spend as much time as you can playing with any new puppy you get, as this is the way he learns to build his primary social bond with you or other family members. Remember that in leaving his former home, mother, and littermates behind, he has lost all his past primary social connections and now has to build new ones. And you want to make this process as pleasurable and rewarding for him as possible. Further, the more you invest in forging this early social bond through play with your puppy, the more trust and goodwill you will build up in him, which will really help when it comes to his future training.

The same applies if you get an older dog, like a rescue. Making this early bond through play gets your new relationship off to the best possible start. If you have existing dogs, and get a new puppy or dog, it is also very important to spend regular time playing with the puppy one-to-one, every day, so he builds his primary social connection in life with you and not with your other dogs. Dogs in a home who are allowed to bond more strongly with each other, rather than you — such as littermates — can be that much harder to train later on.

The 'no teeth' rule

When playing with puppies, bonding apart, the next important thing to consider is what do you want to teach your dog through toys and the whole play process? The reason for this is that puppies will carry on doing what is most instinctive for them to do as dogs when playing, unless you give them better direction.

The way, for instance, people want to play with puppies is not how puppies tend to play with each other, where there can be a lot of wrestling, barging, and tugging, and the use of teeth. So, one of the very first play lessons a puppy needs to learn when he comes into a new human home is the ‘no teeth’ rule.

In other words, the instant his teeth touch any part of the human body all play and social interaction will stop.

You may also need to immediately leave any room you are in with a puppy if he persists in trying to nip you. Also be aware that more exciting, rough and tumble play of any kind with your puppy will always trigger greater use of his teeth.You can use a specific command, like ‘Stop!’, to tell your puppy all play is now going to be abandoned because he has touched you with his teeth, and over time this command should be enough in itself to make any nipping stop. However, I personally prefer to use the ‘Off!’ and ‘Back!’ commands, as they can have so many other uses later.

Playing should also be an ongoing habit between you and your dog, with the dogs and owners who play together more regularly always having the closest bonds. Just about every important future life lesson or training command I teach my dogs always begins with their earliest play sessions, whether this is better recall, or retrieving things, or dropping down on the move when I ask them to. As some dogs get older, they may become less interested in play, or even toys, but they still won’t forget what they learned from these things when they were younger.

So, take the time to teach your dog what you need to through play, when they are young, or even older if needs be, and the effects it will have on their future behaviour will always be worth it. 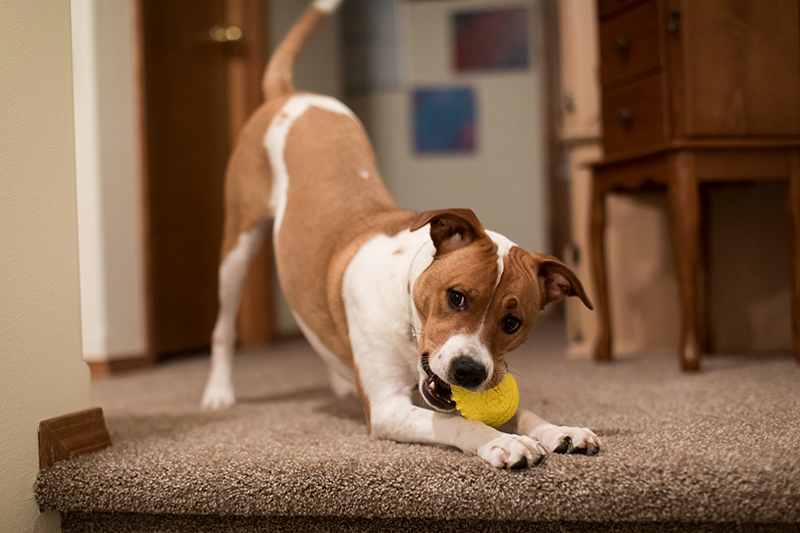 Puppies can learn a lot through play.

Teaching the ‘Off!’ and ‘Back!’ commands

The ‘Off!’ and ‘Back!’ commands are important things to teach a puppy, because they can be used in many different contexts later, like when you want a puppy to stop nipping, or jumping up.

And teaching them is just so simple. First get a favourite toy in your hand and wait until your puppy actually jumps up to get it. As he tries to do this, suddenly walk forward in a way that means your puppy has to move off and away from you. As he is actually doing this, say ‘Off!’ and then immediately praise him well and let him have his toy as a reward for moving off you.

Then move on to the ‘Back!’ command. Get your puppy to move ‘Off!’ you, as before, then keep walking forward a few more steps so he has to reverse backwards as well. As he is moving backwards a few steps, say ‘Back!’ and praise and reward him again with his toy.

Once you have taught your puppy or dog to move ‘Off!’ and ‘Back!’, you can teach him things like off-then-back-then-sit before giving him his toy, or off-then-back-then-lie down-and-watch you —a whole string of different and valuable commands for the future. 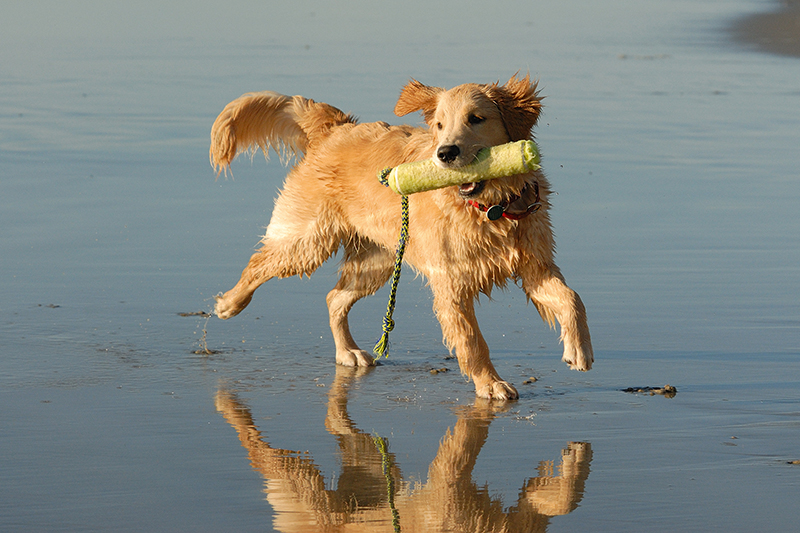 Teach your dog to give back a toy when requested to do so.

Teaching the ‘Give’ command

So many less pleasant scenarios with dogs, like them stealing things off others and not giving them back, or getting more aggressive about their possession of them, could be avoided if owners only taught them a ‘Give’ command when they were younger.

To do this, simply have a toy in one hand and lots of tasty treats in your pocket. When your dog takes the toy in your hand in his mouth, let him see a treat in your other hand. Do not pull the toy, which may make him hold on to it more firmly. As he lets go of the toy to eat the treat, say ‘Give’, praise him, and, after he has eaten the treat, let him immediately have the toy back. Practise this over and over again, until your dog will ‘give’ you a toy back even when he can’t see the treat first. Then move on to swapping something he has ‘given’ back to you for something else, like another nice toy. Eventually your dog will learn that there are only intense rewards attached to him giving back to you anything you ask for. 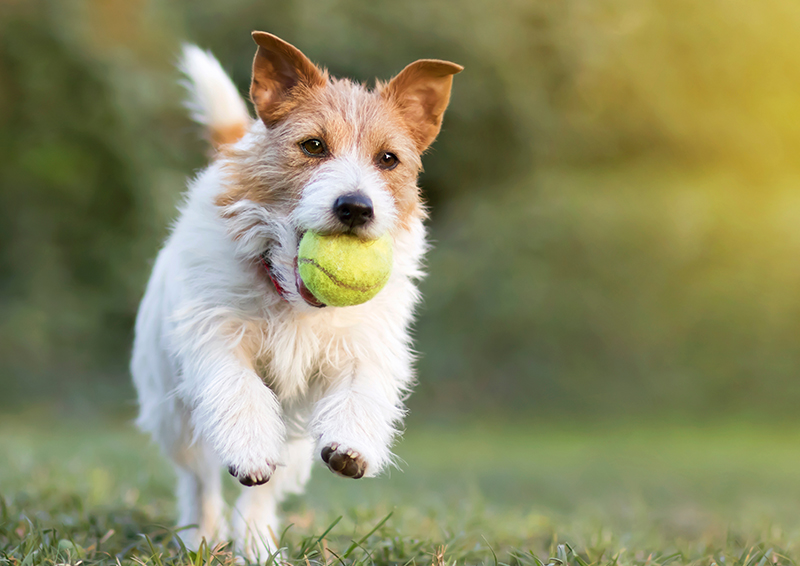 Play should be fun

Should dogs have access to toys all the time?

Some people are of the opinion that dogs should never have access to toys at home all the time, as it devalues their future incentive power in training. But I believe there is
a compromise where dogs can have some favourite — and less easy to destroy — toys available to them all the time if they want them, whereas those they value most you just keep for training.

It can also depend on the breed. Some breeds like terriers, for instance, can be incredibly destructive with toys, to the point where few ever last long in their presence, whereas other breeds can be far more gentle or careful with them. With more obsessive breeds like collies, and some spaniels, you really do have to ration how much time they are allowed to play with something like a ball as they often just do not know how or when to stop.

Dogs who show any kind of more serious resource guarding behaviour around toys should definitely not be allowed constant access to them (see ‘Teaching the ‘Give’ command’).