What is Alabama rot? 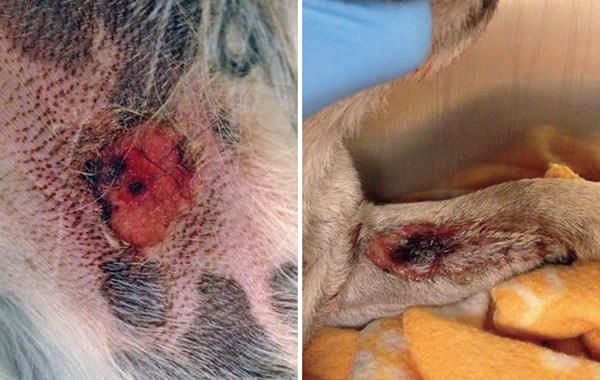 Alabama rot is a condition which has gradually spread across the UK, as vet Roberta Baxter explains...

There are a number of diseases that most vets weren’t taught about at college, as they have only recently been identified in the UK. One that has been in the news lately is Alabama rot, a potentially fatal condition which is particularly worrying. We understand so little about it that we don’t yet know how best to avoid it, or how best to treat it when it occurs.

Alabama rot is so named because it was first spotted in racing Greyhounds in Alabama, USA, in the 1980s, causing skin ulcers and kidney disease. It’s less user-friendly name is cutaneous and renal glomerular vasculopathy (CRGV).

The condition is characterised by tiny clots forming in the small blood vessels (vasculopathy) in the skin (cutaneous) and kidneys (renal), causing patches of tissue death in those areas.

For a long time, the disease was thought to be limited to the USA, but over the last few years, occasional cases have been seen in the New Forest area, and since then it appears to have gradually spread across the UK. There have been confirmed cases in most counties, with recent cases seen in Cornwall and Ireland, though Wales and East Anglia seem relatively unaffected.

Cases generally appear following a walk in muddy woodland during the winter (most cases seem to occur between November and May), and it has been suggested that there must be an organism in mud that causes the condition. Attempts to identify the cause have so far been unsuccessful. There were suggestions that a parasite may be involved; more recently, research has been focused on whether it may be associated with toxins from a rare form of E coli bacteria, but we still aren’t sure.

Without knowing the cause of the condition, there is no sure method of diagnosis or treatment. Affected dogs usually start with the development of small skin lesions which affect the limbs, face, and tongue, generally two to seven days after a muddy walk. These lesions may initially look like slightly raised or raw patches, and are often circular with a centre which gradually darkens before ulcerating. The lesions can vary from a few millimetres in size to something much larger, and are often sore and associated with swelling or bruising. Lameness may also be seen because of the soreness.

Initially, most dogs seem well in themselves, but often they rapidly become off-colour and lethargic, as kidney disease may show up at the same time, or may follow a few days later, causing symptoms of malaise, such as increased drinking and vomiting.

Blood tests may show kidney disease, but diagnosis is very difficult without knowing the exact cause. This is because there is no specific test for the condition, and we can’t always differentiate these symptoms from other similar conditions.

However, it is important to be vigilant and to seek prompt veterinary attention if any symptoms of this type occur, as affected dogs can deteriorate rapidly — a patient’s best chance of survival rests on having prompt and intensive treatment in a veterinary hospital.

What can dog owners do about Alabama rot?

Any dog with unexplained ulcers or sores on his limbs should be treated as a suspected case, and should receive urgent veterinary attention, ideally with blood tests, intravenous fluids, and supportive medication. If treated promptly, some dogs recover, but others go on to develop more serious symptoms and may die.

The only certain test for the condition involves examination of kidney samples, and so a definite diagnosis may be made if the patient dies. It would be great to be able to advise owners how to avoid this condition, but again, the lack of understanding of the cause means we don’t really know.

However, there is advice to avoid muddy walks in winter, and to wash off muddy limbs promptly after exercise. A lot of research into this condition is ongoing, and hopefully once the causal organism has been identified, treatment and cure will be possible, and more specific advice will be available regarding how to avoid the disease.

In the meantime, a ‘New Forest Dog Owners’ website and www.arrf.co.uk are collecting donations to fund research; the Animal Health Trust is currently performing some online research; and a recent conference allowed professionals to share their understanding of this heartbreaking condition.