As well as providing your dog with lots of fun, a flirt pole can teach him self-control. Karen Bush and Toni Shelbourne explain how it works.

If your dog chases wildlife, tanks off after other dogs, or struggles to come back down to earth after a high-arousal game, a flirt pole could be the answer.

Typically a tug toy on a bungee cord, attached to a length of pole, it lets you play exciting, fast-paced games with your dog, which can also teach him patience and self-control around  fast-moving things. 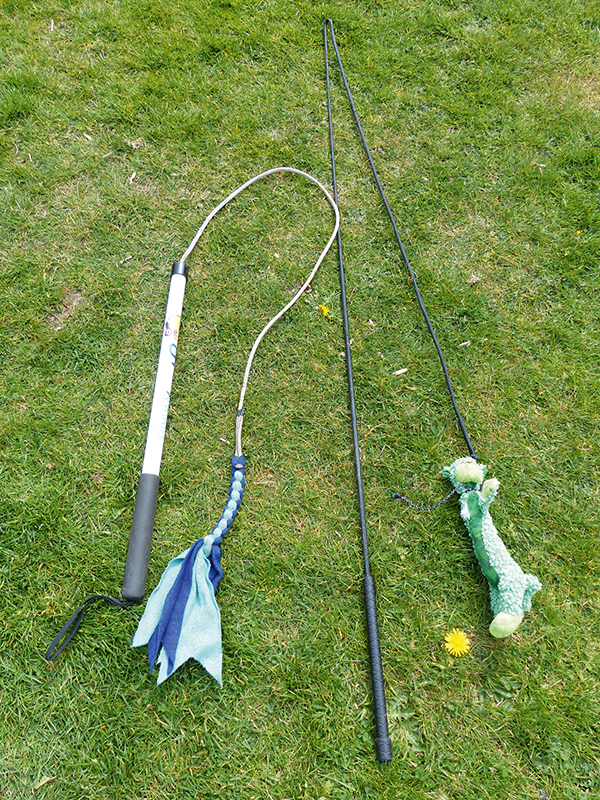 You can buy a flirt pole, make your own, or use a horse lunge whip. 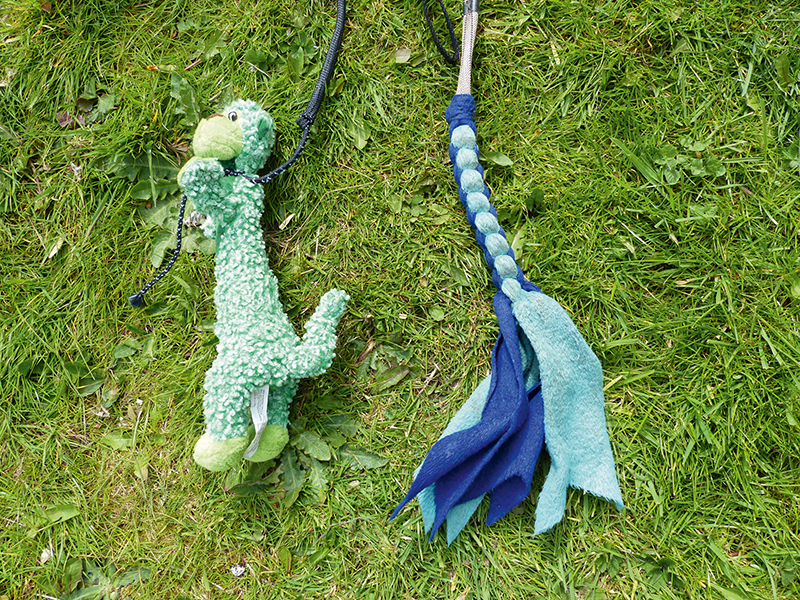 The lure part of the flirt pole should be soft and inviting enough for your dog to get a safe grip on it.

● Where can I get a flirt pole?

Flirt poles are readily available from online shops; you can make your own or use a horse lunge whip. Made of fibreglass with a long plaited thong, a lunge whip may be slightly heavier to hold, but can be more flexible. You can then attach a tug toy to the end of the thong.

This fast-moving exercise needs to be used with care. It’s not recommended for young dogs who are still growing, or dogs with any pain or lameness issues. You should also avoid playing it on wet grass where your dog could slip, or on hard surfaces where he might injure a pad or rip a nail.

If you have an anxious dog, it’s not the best game to play just before a walk as fast exercise can increase the stress hormone adrenaline, and possibly further raise your dog’s anxiety levels. 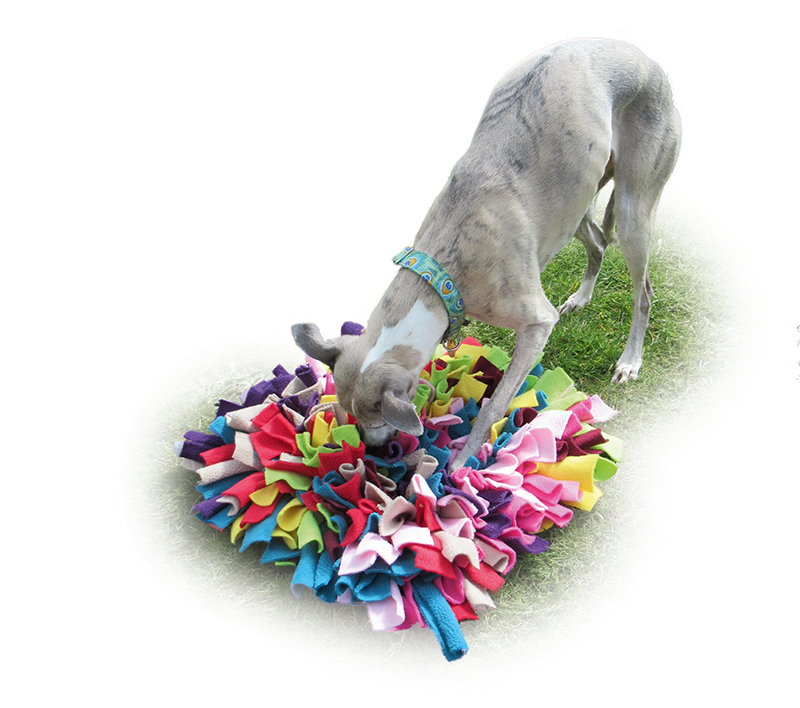 Enrichment and scent games can help bring your dog down from an adrenalin high.

Make sure you warm up your dog first to minimise the risk of injuries — this might involve a walk or gentle game to increase the heart rate and get the muscles ready for more energetic action. Equally, remember to warm down afterwards — scent games can be good as these will involve gentle movement and can help bring your dog down from the adrenalin high he will experience during the flirt pole activity.

Before you start playing with the flirt pole, you’ll need to teach or brush up on a few skills, including the following:

A flirt pole is an exciting, fast-paced game. It can help you teach your dog some self-control around moving objects, while also providing him with an outlet to chase something — a natural instinct for many.

If your dog is comfortable with eye contact, encourage him to look at you and hold eye contact; first with no distractions and then with movement in his periphery vision.

1. Start with your dog sitting or standing in front of you. Have a treat in your hand and bring it up towards your eye. When he looks at you say a marker word like ‘Yes’, ‘Good’, ‘Nice’ and immediately feed your dog. Don’t ask him to hold that eye contact for long at first; build this up over time. You can add in a word when he reliably looks at you, such as ‘Look’.

2. Once he can manage this for a sustained period, stop holding the treat in your hand and start to ask for the eye contact with just your voice and hand movement.

3. Next add in some distraction — holding a treat or toy out to the side works well. You can start to move it about as he gets better at maintaining eye contact.

4. Take it on the road! Ask for it at different times and in different environments, until you notice he starts to look at you often. 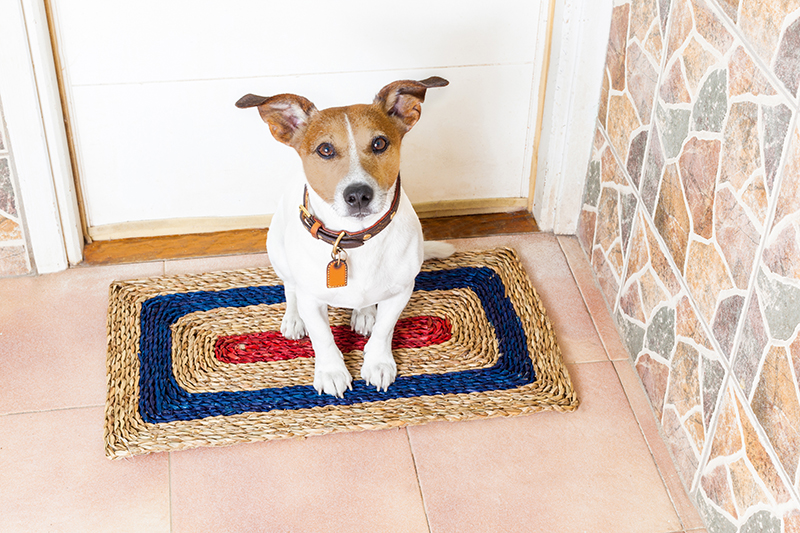 There should be plenty of opportunities to practise sit and wait cues during the day.

Hopefully, these are skills your dog already possesses, but if not (or if he’s a bit rusty) work on them separately.
You can encourage sit by rewarding your dog whenever he naturally offers it, as well as when you specifically ask, so he learns it pays to sit often around you. There are plenty of opportunities every day for practising wait — at doorways, when jumping out of the car, while you place his dinner on the floor, and so forth. 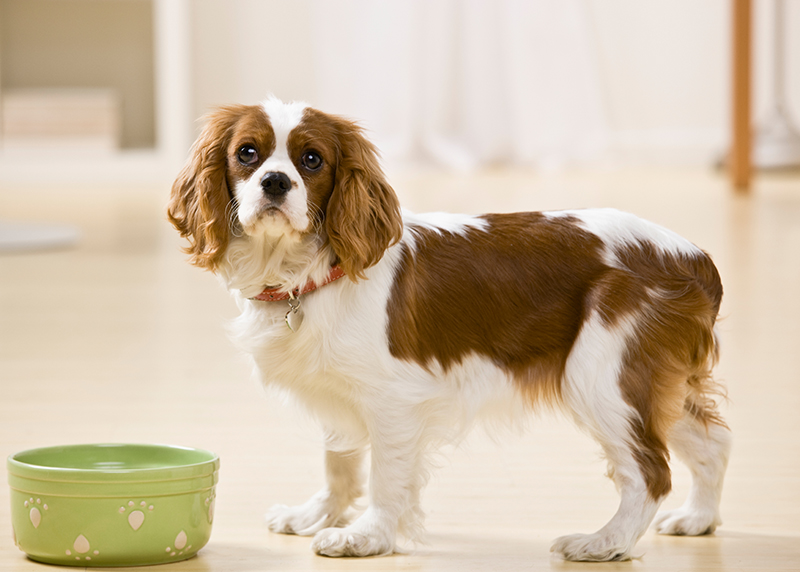 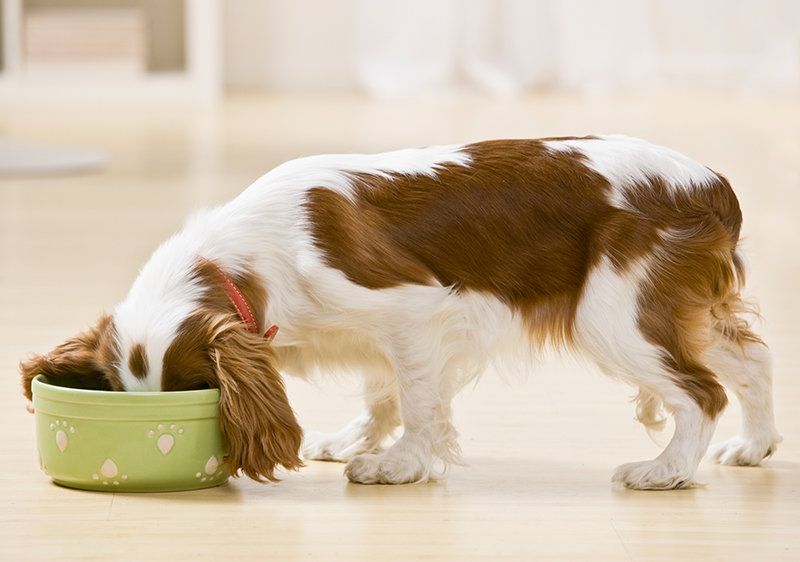 Teaching your dog a release cue lets him know that he can finish whatever you are asking him to do, such as waiting to eat his dinner.

This is an important cue which tells your dog he can finish whatever you are currently asking him to do. Commonly used cue words are ‘Free’, ‘Release’, ‘Go’, or ‘OK’. Again, practise this in many different scenarios. It’s a good one to remember to say after you’ve asked for a wait or sit, to tell your dog he can now move through the door, or eat his dinner.

1 Ask your dog to sit or stand in front of you and when you want him to move say your release word and either move slightly or use a treat to lure him out of position.

2 After practising for a few sessions, say the word and wait to see what your dog does. With no movement from you, does he get up and move? If not, prompt him again and reward.

3 Test it out by saying other words and then your release cue. Can your dog pick out the right verbal cue from all the other words? Make sure he really knows the correct word for you to release him or it can muddy the water when you really need him to stay in place. If he breaks the sit or stand before you ask him to, just quietly ask for the position again and go back a stage in training.

Playing tug at the end of a chase is great fun, but at some point you do want your dog to calm down and let you take back the toy. Don’t play with the flirt pole until he can drop the toy on cue. Take hold of it with one hand, keeping it as still as possible, and with the other hand hold a tasty treat just in front of his nose. As your dog releases the toy, simultaneously give the treat and say the cue word ‘Drop’. Then give him a verbal cue to take the toy again, such as ‘Take it’.

Alternatively, if your dog isn’t a foodie or can be possessive of toys:

1Have two identical tug toys. Play tug with one, then make that one boring by keeping it as still as possible and not pulling back as he tugs, while waving the other one around excitedly. As your dog releases the now boring toy, say ‘Drop’ and immediately throw the exciting toy for him to fetch.

2On his return have another game of tug before repeating.

3Test it out: can you say ‘Drop’ and he immediately drops  the first toy? If not, go back to the first stage.

4Once he understands it, start to play with just one toy.

Practise using the flirt pole without your dog around, so you get a feel for controlling its movement, speed, and direction. Hold it in the outside hand of the direction you’re going to turn; this helps you keep the toy ahead of your dog. Practise with it in either hand so you can send your dog in both clockwise and anti-clockwise directions rather than always the same way.

You’re now ready to introduce the flirt pole. For safety, keep the toy trailing along or very slightly above the ground so your dog doesn’t have to leap up for it, which could lead to injury and can be damaging for joints.

Keep the chase short as it can be a strenuous activity, especially for an unfit dog. You also don’t want him to get frustrated or lose interest if he hardly ever gets the toy. When he catches it, give lots of praise and play a fun game of tug before asking him to ‘Drop’, and then reset.

Put together in sequence, the stages of the game will be as follows:

● Your dog automatically sits, or you ask for a sit and wait.

● You move the toy around while your dog maintains eye contact with you.

● You release your  dog to go play.

● He chases the toy  and catches it.

● You ask him to drop the toy. 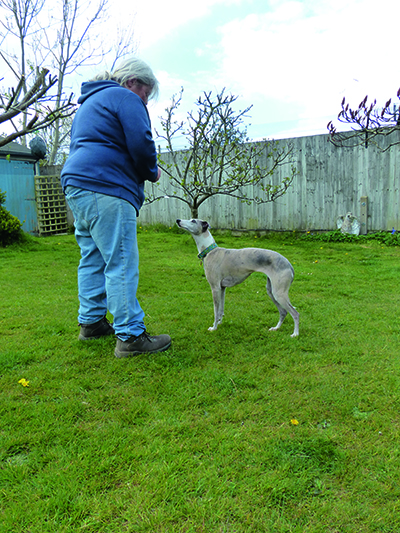 Ask your dog to sit or stand in front of you. 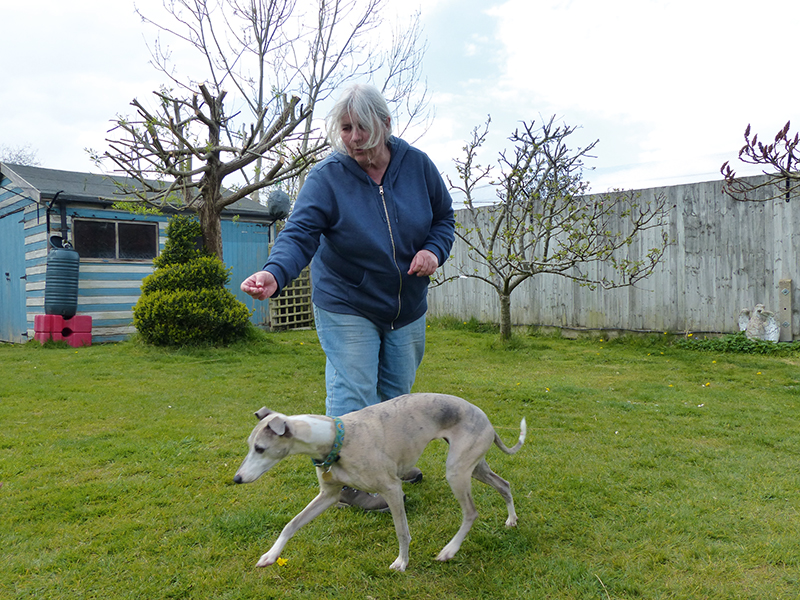 When you want him to move, say your release word and either move slightly or use
a treat to lure him out of position. 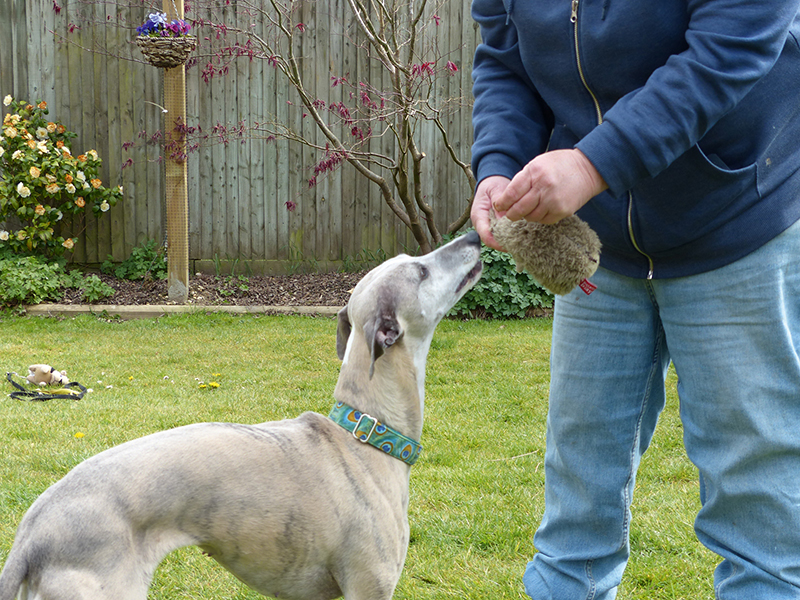 As your dog releases the toy, simultaneously give the treat and say the cue word ‘Drop’. 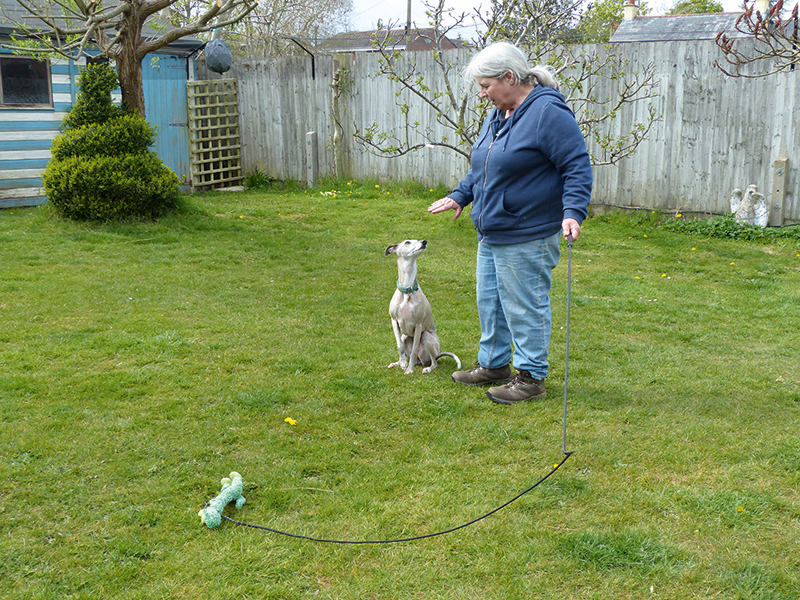 Ask for a sit and wait; move the toy around while your dog maintains eye contact with you. 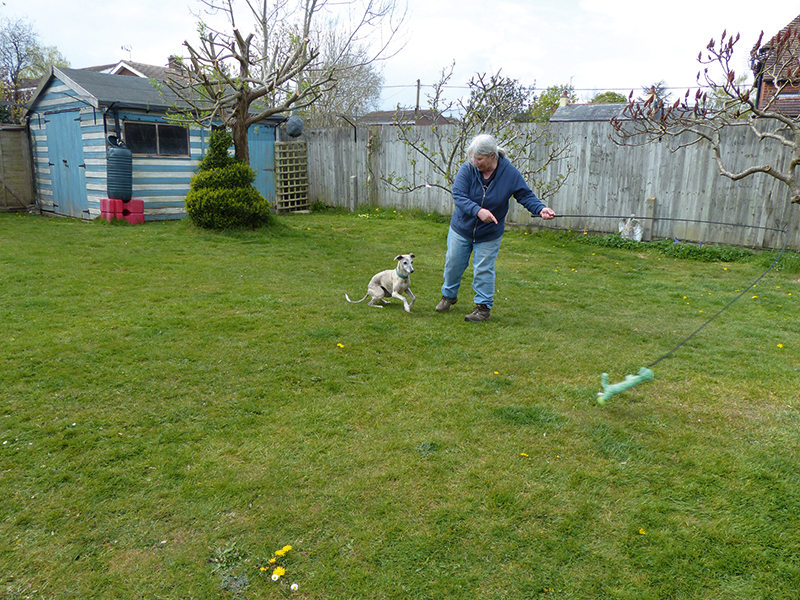 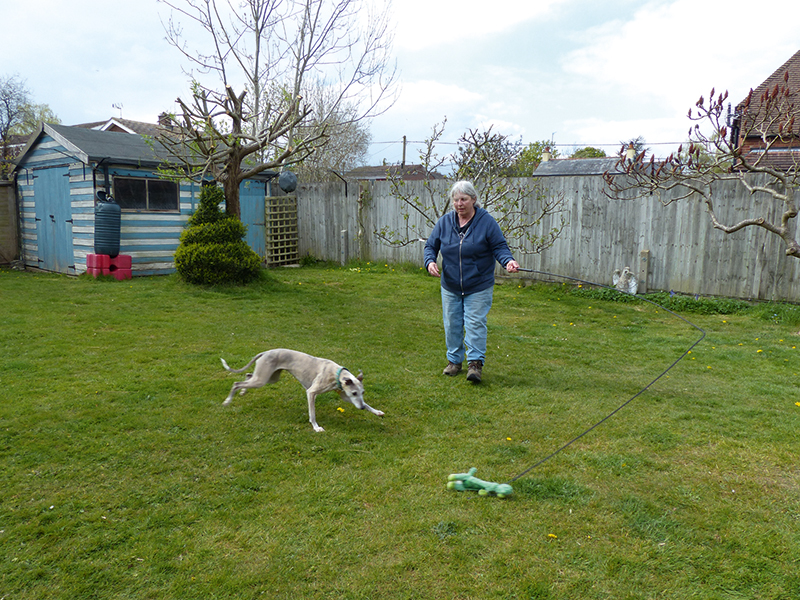 …allowing him to go chase… 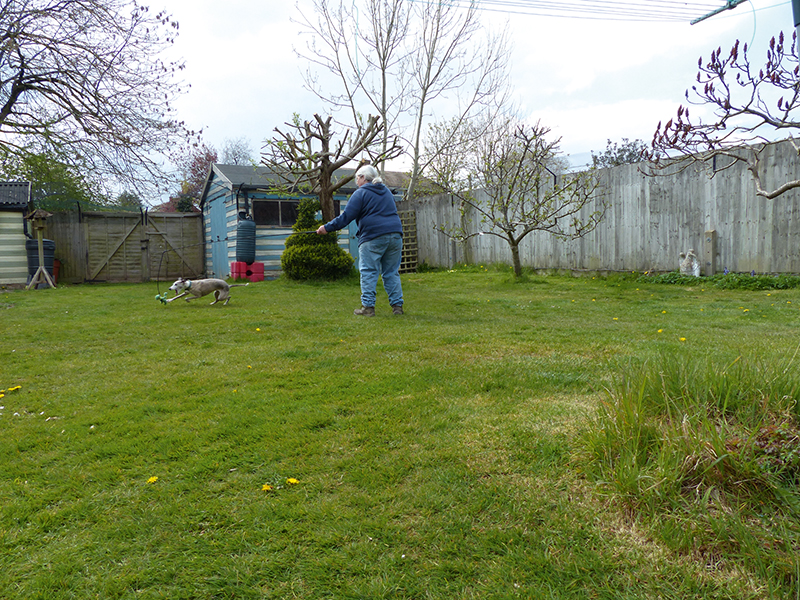 …and to catch the toy. 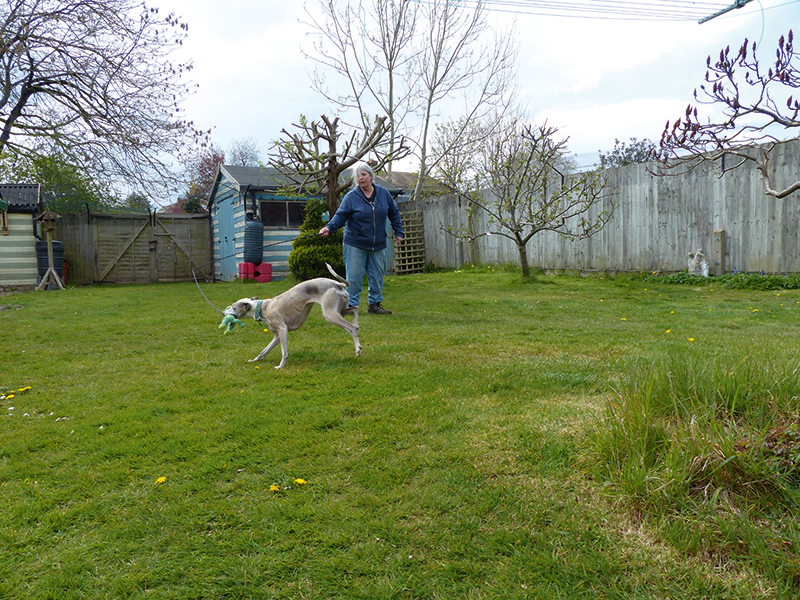 When he catches the toy, give lots of praise and play a game of tug before asking him to drop it and starting the game all over again. 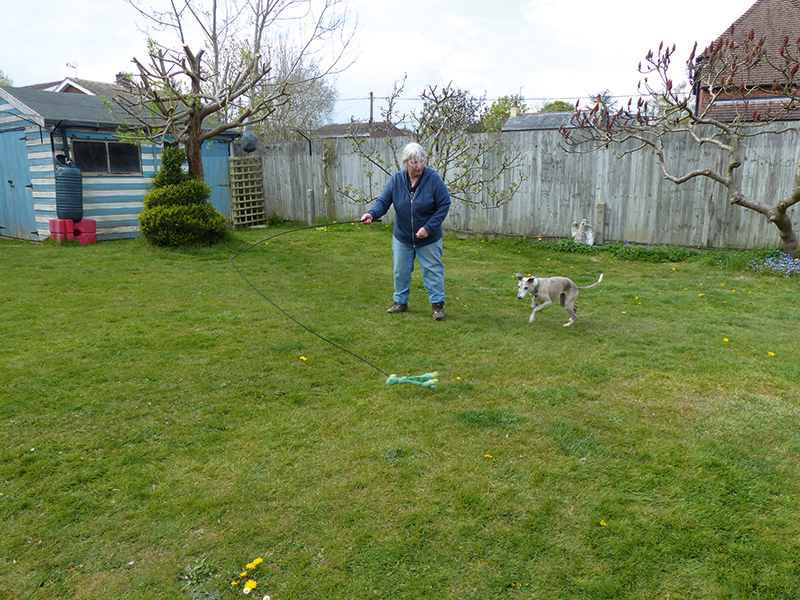 Keep the toy trailing along or just above the ground.