The importance of play For dogs, play is a rehearsal for real life. Trainer Carol Price reveals the invaluable lessons dogs learn from playing with each other and with us.

Play is something we may think of as a purely pleasurable, recreational activity, but for the wider animal kingdom it has a much more vital purpose — particularly for animals like dogs who have long owed their survival to their ability to work together as a social group or pack.
Play is really part of the social glue that keeps them together, which is why you tend to see it so often in dogs who are related, live together, or have otherwise forged a close social bond when they were younger.
Play is also the way a dog starts rehearsing for real life, starting from very early puppyhood. To the more casual observer, the umpteen games and tussles of a new litter of puppies may seem like ‘fun’, but the puppies will also be learning so much about themselves and each other, like who is stronger or weaker, who they can more easily bully or take toys or food from, and the limits of how hard they can bite each other without triggering a painful retaliation (otherwise known as bite inhibition).

Lessons learned for the future

Often what puppies learn from their earliest play interactions with others can be carried on into their later life and behaviour. This can include a sense of greater inferiority or vulnerability, greater ability to bully or dominate others, or the rewards of using aggression to keep others away from their ‘stuff’. This is why it is so important for any breeder to try to better understand and control what puppies learn from their play (see ‘The lessons of play’ right) to ensure any potentially more harmful things aren’t learned by dogs during this highly formative phase of life.
Things that more greatly concern me, when watching any litter of pups play, are individuals who seem more persistently detached or distanced from their littermates, and less interested in becoming actively involved with their games, as this could suggest a dog with lower social abilities. Neither do I like bullying pups who not only play more roughly and aggressively with others, but do not stop when the pup they are bullying yelps to signify his unhappiness or distress. Again, the bullying pup could well take the same behaviour forward into his future interactions with other dogs. And the pup who is bullied, realising that the normal code for making another dog stop hurting them — namely a yelp — does not work, could learn to become more fearful of other dogs and their intentions, or even more defensive themselves.
re positive signs
Often the best place to get a pup is somewhere where there are also several other adult dogs present, capable of telling young pups, in an assertive yet essentially benign way, when their ‘playful’ behaviour is less socially acceptable to other dogs. All too often puppies who have not had their more presumptuous or over-boisterous approaches to play checked by adult dogs when they were younger can come a cropper trying the same behaviour later on less tolerant, older dogs.
Something I also like to see, as a potential puppy owner, is one who, when I throw a toy, immediately goes and brings it to me to play with them, rather than take the toy away to play with by themselves. The first suggests a dog who values the interaction with me more than the toy itself, and these usually turn out to be dogs who are far more rewarding to work with and train. 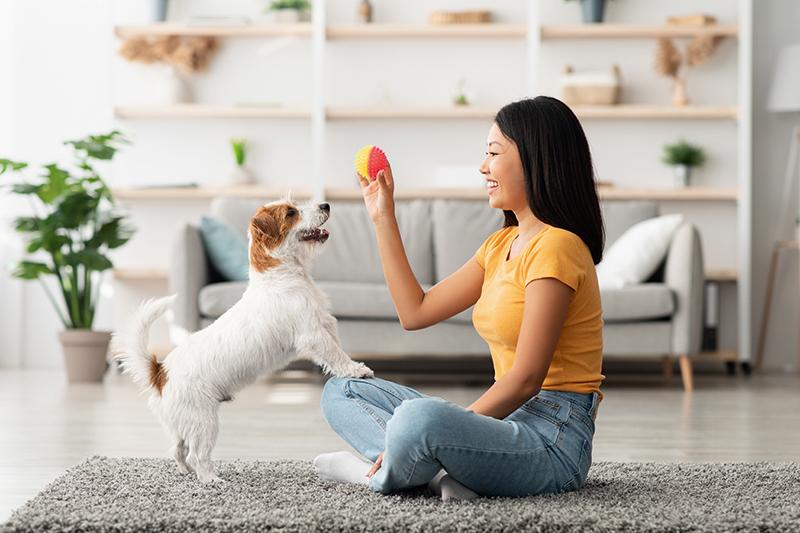 Dogs soon learn that playing with people can be rewarding too.

That said, it is still possible to teach most dogs the joys and rewards of interacting with people, if you start young enough and always make your games with them positive and fun. And it is also a massive part of their next major adventure in life — learning to live with humans.
Often the huge social adjustment puppies have to make from around eight weeks onwards is under-appreciated. They begin their lives identifying as dogs, and playing and socially relating to each other as dogs, then suddenly all this stops when they go to new homes, and they find themselves having to reset this whole social learning process with people instead. It can cause many young dogs confusion, during which they may still attempt to interact or play with humans as if they were other dogs, including a lot of boisterous behaviour and nipping; the latter of which should always be discouraged.
Another thing it is incredibly important to teach any puppy is how to share things — including toys — with others, and give back to you when asked anything they have got or taken.

Read the rest of the feature in the July issue, available to read instantly on our digital edition HERE or purchase the print edition HERE.