Tiny dogs may look sweet — even irresistible — but the truth about them often leaves a bad taste in the mouth, as Julie Hill discovers.

Increasingly, unscrupulous puppy producers promote tiny dogs on social media — often describing them as ‘teacup’ to emphasise their diminutive size — where the cute factor wins them many admirers.

But does the desire to own a dog who may well gather a large social media following drive the demand for these tiny dogs? Whatever the cause, this is a growing problem, often with health implications for the pups involved.

The fact is the term ‘teacup’ has no official meaning; the label is actually a cynical marketing ploy.

“The Kennel Club does not recognise any ‘teacup’ breed, and will not record dogs being described as ‘teacup’ on its register,” explained Bill Lambert, head of health and welfare at the Kennel Club. “We believe that the ‘teacup’ label can promote exaggerated and potentially unhealthy characteristics.”

“Basically, it’s a selling tool,” warned Julie Pike, secretary of The Pomeranian Club UK, “because the moment the ‘teacup’ label goes on, commercial/puppy farm breeders can ask extortionately high prices. They tend to breed from the very small dogs and produce tiny puppies — almost with the attributes of dwarfism.”

Gwen Oliver, secretary of The Maltese Club, added: “The deliberate, paired mating of two small dogs, of the same or different breeds, is used to produce abnormal ‘teacup’ examples of many toy breeds. There has been a huge increase in deliberate cross-breed matings, concentrating the health issues of each parent into their progeny.”

With cross-breeds not being registered by the Kennel Club, the scope for abuse is even more worrying.

Health issues are the crux of the ‘teacup’ problem, as leading practising and media vet Pete Wedderburn explained: “The main issue is the same as for many pedigree dogs: the strong focus on the physical features of the dog is sometimes at the expense of the good health of the animal.”

Unfortunately, these dogs appealing appearances blind some to their suffering, which can be extensive. RSPCA dog welfare expert Lisa Hens pointed out: “Their ﬁne bones are very vulnerable to stress fractures and they are at risk of painful fractures from minimal trauma such as jumping. Dislocation of the kneecap is also common in very small toy breeds, leading to pain and lameness. Dogs bred to be extremely small can also suffer from respiratory problems, which can severely limit their ability to run and exercise.”

Research has also indicated that the disadvantages ‘teacup’ puppies suffer may lead to behavioural issues later in life.

However, due to the complete lack of regulation, this is a complex issue, with some dogs marketed as ‘teacup’ maturing into surprisingly large animals.

Julie Pike explained: “The other side of this issue is the unethical breeders, who breed a Pomeranian to a larger spitz-type dog and still sell the puppies as ‘teacup’ Poms at far too early an age to leave their mothers, so the pups still look small and fluffy. If the pups survive, they can grow up to be anything but tiny! 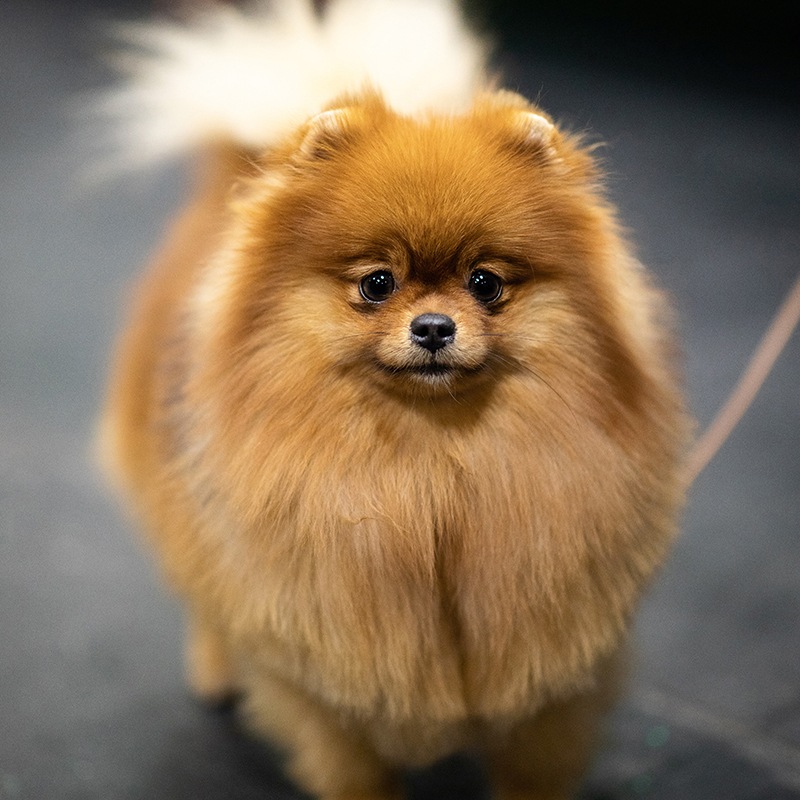 “A short time ago a lady rang me, saying she needed to rehome a dog.
She said it was a ‘teacup’ Pomeranian and she had Kennel Club papers for him, but on questioning her, he was 10 kilos in weight!” The Kennel Club’s Pomeranian breed standard gives a weight range of 1.8 – 2.5kg.

Gwen Oliver echoed these concerns, advising any buyers wishing to own a small breed to look at images of the standard conformation of the breeds they are interested in, and research them well. “Speak to responsible breeders, local vets, and breed dog clubs in order to make an informed choice,” she said.

Many issues divide the dog world, but on the topic of ‘teacups’ the unified message is loud and clear. The Kennel Club, the small dog breed clubs, and the major charities all agree — the ‘teacup’ label causes suffering for dogs, and heartbreak and financial loss for people.
For worried potential puppy owners,  Bill Lambert advised: “The Kennel Club Assured Breeder Scheme is a good way to find a well-bred and adjusted puppy. Breeders on the scheme are regularly inspected to ensure they adhere to certain high standards, and it’s the only organisation accredited by UKAS to certify dog breeders in the UK.” 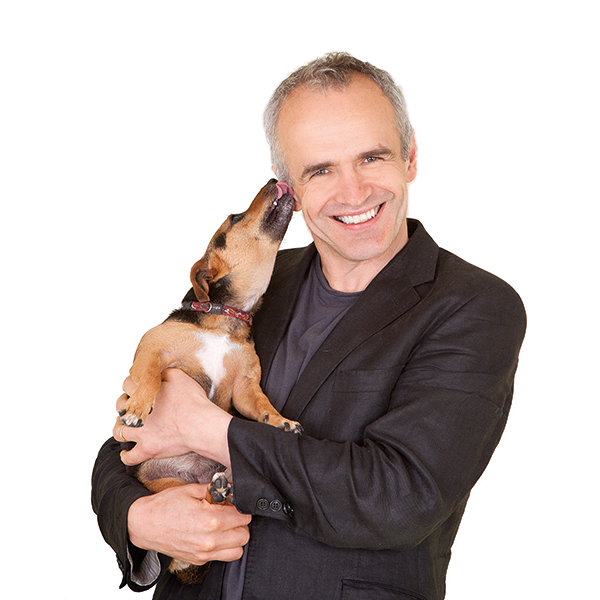 “To achieve the overarching aim of having the smallest dog possible, cynical breeders may choose to breed from the smallest possible dogs, and this can mean choosing the runts of the litters who are small because of underlying health issues, rather than breeding from the larger, healthier individuals. There are many possible health issues that can affect these little dogs, but the most common include heart defects, hydrocephalus (a domed skull, with resulting internal brain issues), blindness (sometimes connected to hydrocephalus), respiratory issues (including collapsing trachea), digestive problems of a wide range, orthopaedic problems (including slipping patellae), and dental issues, caused by these little dogs having the normal number of teeth crammed into the tiny space of their little skulls. These dogs are also prone to hypoglycaemia because of their diminutive size.

“If you are determined to get a small dog, work with a professional breeder with a good track record of producing healthy dogs. Check about the recommended pre-breeding health checks that need to be done for the breed of your choice (see the Kennel Club website), and do consider a larger rather than a smaller version of the breed. It is not natural for a dog to be so small that he fits into a teacup, and there is a price to pay for the little animal being forced to attain this goal. Don’t do it to them, and don’t do it to yourself — choose a healthier, more natural size.

“At the moment, Cassie’s loving life…”

When her owners had a baby, and no longer wanted tiny Yorkshire Terrier Cassie, who weighs in at just 1.6kg, Jill Watson, from Burnley, Lancashire, adopted her.

“The vet thought — from the state of her — she was 14,” Jill recalled, although Cassie was actually only three.

She needed dental treatment, which included the removal of five teeth. “Her mouth was too small; her crowded teeth had become loose and painful,” said Jill.

“Both her knees are grade four luxating patella — the highest they can be. They’re permanently out, but she’s too small to operate on; the bones would fracture. She has canine epileptoid cramping syndrome (CECS) which means she can’t have gluten at all.

“She has physio and hydrotherapy, painkillers, and ketamine injections to try to relax her muscles. She’s got sore eyes because her tear ducts aren’t big enough to take the water away. On a normal sized dog they could operate, but she’s too small. 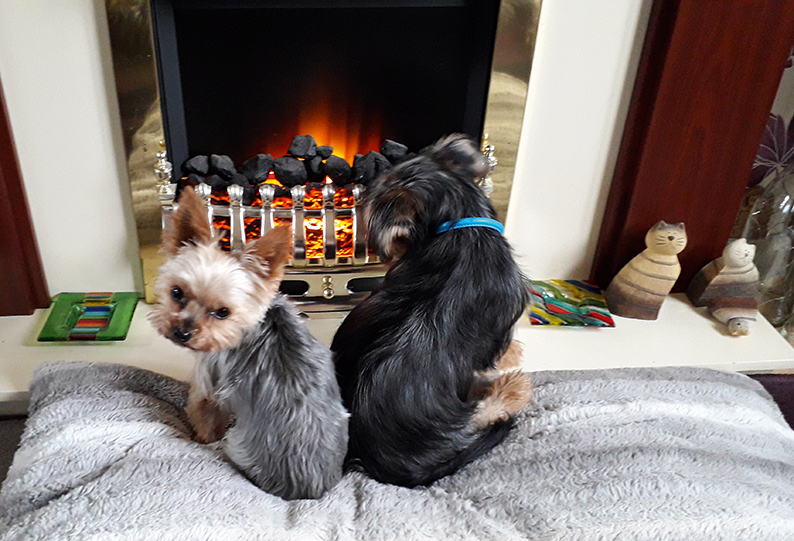 “We’ve spent thousands and thousands on her, but she’s such a happy little soul. Day by day everything is getting slightly harder and she’s struggling more. At the moment, Cassie’s loving life — but when that changes, and we can’t keep her pain-free, I won’t let her suffer.”

“Pip runs around and never bumps into anything!”

Penny Andrews, from Hunstanton, Norfolk, adopted Peggy and Pip, two tiny Chihuahuas the RSPCA rescued and rehabilitated after they were found abandoned at the roadside. The RSPCA believe they were bred for the ‘teacup’ trade, but were discarded because their health issues made them unsellable. 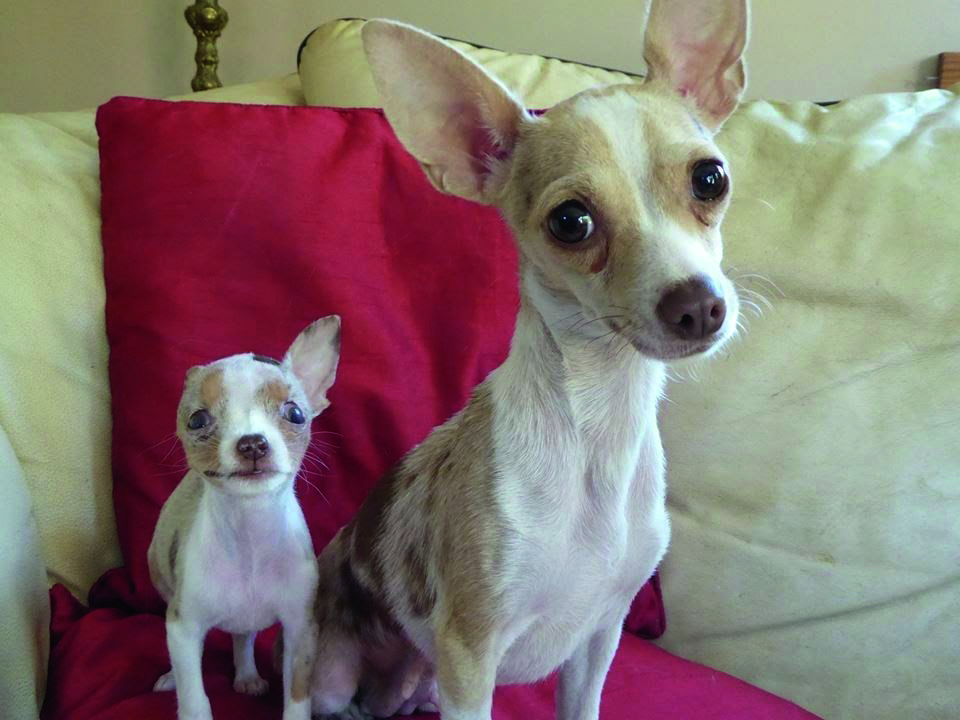 Peggy and Pip were abandoned due to their disabilities.

Penny and her daughter, Jess, already shared their home with Perry, a Jack Russell X Dachshund, four cats, a budgie, a cockatiel, and a tortoise. 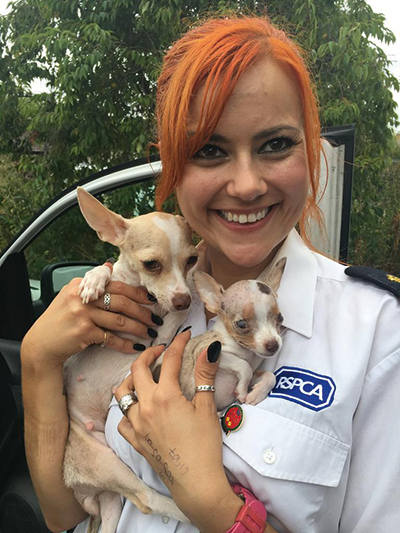 Despite the devastating impact of their health issues, the dogs have settled in well. “The animals all get on, and the dogs all sleep in the bed under the duvet at night,” Penny said. “Pip has mapped out the bungalow; she runs in and out, and around the top of the garden; she’s so clever, the way she runs around and never bumps into anything! You could quite easily forget that she can’t see. I think it affects me more than it does her. Peggy is very laid-back and just wants cuddles all the time. They’re both really happy!”