Being overweight can compromise your dog’s heath and shorten his life, so now is a good time to shed those excess pounds, advises Vicky Payne.

At this time of year, many people find their clothes feel a little snug after all that Christmas feasting, and look to lose a few pounds.

There has been even more focus on maintaining a healthy weight in recent months, as overweight people are at higher risk of complications from COVID-19. But obesity is not just a problem in humans.

It is estimated that almost half of UK dogs are overweight. And being overweight increases the risk of arthritis, spinal disc problems, breathing difficulties, urinary incontinence in bitches, some types of cancer, cruciate ligament rupture, and a reduced lifespan.

A study done by a pet food manufacturer found that moderately overweight dogs lived on average two years less than those with a healthy body condition. So, why are so many dogs overweight? Quite simply, we are overfeeding them! While genes have been identified that give some dogs a larger appetite, this does not mean they need to get fat. Neutering has also been linked to weight gain, but again this can be controlled. I tell my clients that all guide dogs are neutered, but their food intake is carefully matched to their work to keep them at a healthy weight. Pet food adverts show bowls filled with food, and few owners weigh out the recommended amount. It is easy to forget that every treat and nibble of human food is extra calories, and there is no doubt that the COVID-19 restrictions have meant some dogs have been on much reduced exercise.

A few weeks ago, one of my long-term weight-loss clients came in for her vaccination. When I first met her, Bonnie was very overweight. She was suffering from cataracts, which were affecting her vision, but the referral hospital was unwilling to put her under anaesthetic until she lost weight for safety reasons. Bonnie’s owners had tried for several months to get her to lose weight by feeding a low-fat, reduced calorie diet, but it wasn’t shifting quickly.

The first thing I did was to take a blood sample to rule out any metabolic cause for Bonnie’s slow weight loss. Hypothyroidism is fairly common in middle-aged Golden Retrievers and slows the metabolic rate. But Bonnie’s blood tests were normal, so we needed a different approach. 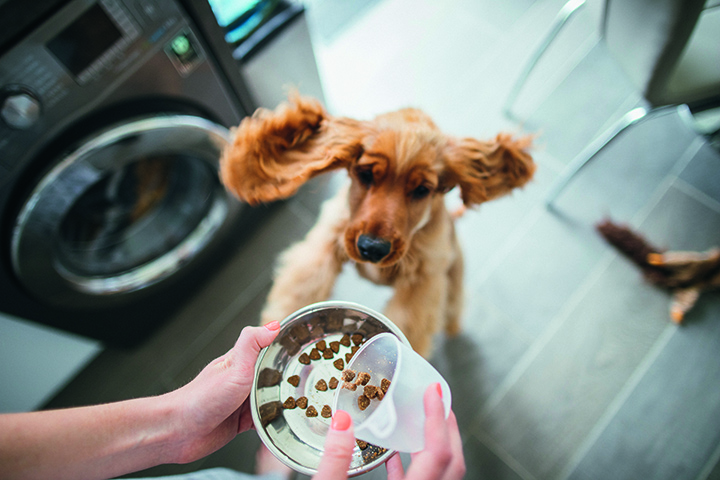 Avoid weight gain by measuring your dog’s daily food allowance and sticking to it.

I took a thorough history and found that Bonnie was reluctant to play, possibly due to her reduced vision. Her walks were limited by her owner’s mobility problems, and her diet was leaving her hungry, so she tended to scavenge and beg for treats.

Instead of a low-fat diet, we used a diet with more protein and moderate levels of fat. These diets have been shown to keep dogs feeling fuller for longer, which reduces begging for extras as well as helping maintain muscle mass. We also explored ways to make Bonnie’s meals take longer to eat. Bonnie took well to scatter-feeding in the garden, as well as eating from puzzle feeders and stuffed Kongs. Her owners kept a portion of her daily ration back to use as treats on walks, instead of sharing their custard creams.

We had to be careful about increasing Bonnie’s exercise. Hydrotherapy is a great option for overweight dogs as the water takes the weight off the joints. Swimming against water jets or walking on a water treadmill are both hard work and burn a lot of calories. Bonnie’s owner suggested ‘fetch’ to get Bonnie running without having to walk too far herself, but chasing and catching balls can be hard on the joints. Instead, I suggested dropping toys during Bonnie’s walks and sending her back to hunt for them. The whole family got involved, taking Bonnie for short walks several times a day and, in a few months, she had lost enough weight to have surgery. Bonnie has gained a kilo or so since then but remains much slimmer than when we first met. 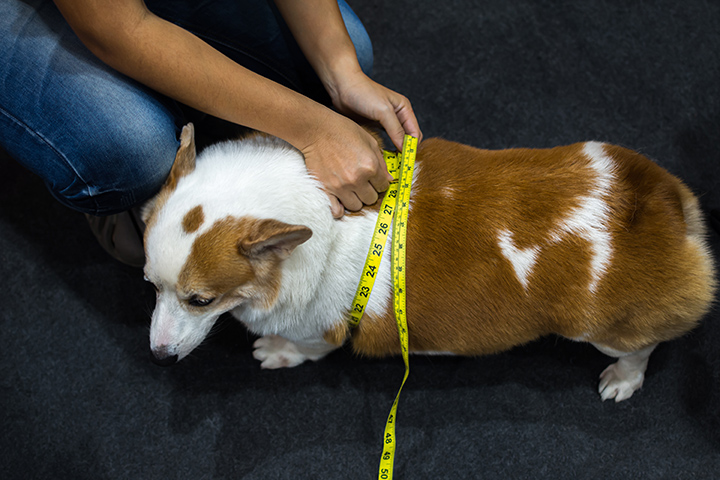 Measure your dog’s chest, neck, and waist to get a clearer idea of how he’s doing.

SO, HOW CAN YOU TELL IF YOUR DOG IS OVERWEIGHT?

As well as taking your dog to the vet’s or pet shop to be weighed, it is important to assess his body condition.

You should be able to feel your dog’s ribs, spine, and hip bones easily, and see the curve of the last rib. Looking from above there should be an obvious waist, and from the side you should see the belly tuck up. There should not be a roll of fat at the top of the tail!

If your dog is on a weight-loss programme it can be useful to measure the neck, chest, and waist as well as weighing in. Weight won’t change as quickly if a dog is gaining muscle as well as losing fat, but his shape will.