They're the most talked-about dancing duo in Britain, and their dazzling routines have inspired others to follow in their footsteps. Teenager Ashleigh Butler and her cross-breed dog Pudsey catapulted to fame after being the first canine act to win ‘Britain's Got Talent'.

Since their first audition hit TV screens, interest in heelwork to music (HTM) and agility has increased by 20 per cent, according to the Kennel Club. But how do you reach the dizzying heights of success? Ashleigh and six-year-old Pudsey took time out of their whirlwind schedule to give some pointers and demonstrate some moves at their home in Wellingborough, Northamptonshire. Ashleigh advised that owners starting out in HTM should brush up on their dog's basic training before trying anything complicated. They should then begin with simple tricks.

"People have to teach their dogs simple moves before moving on to complicated tricks," explained Ashleigh. "Start by going over the sit and down commands - a dog isn't going to roll over before he's learned to lie down. Once he can do this, gradually progress to moves that are harder and harder."

She advised people to teach moves their dogs enjoyed, which were easy to learn at first. The most common moves to begin teaching were spins, weaving through legs, and roll over. "Spinning is one of the easiest tricks people can teach their dogs," Ashleigh explained. "Pudsey likes jumping from my arms and walking on his back legs. These aren't basic moves but they were easy for Pudsey to learn. He can jump really high in our routines because he's so used to doing it in agility, which helps his flexibility and with some of the moves he can do. Remember that not every trick is going to suit every dog. Before I even thought about doing HTM I taught Pudsey little tricks, such as waving his paw, when he was a puppy. Tricks such as weaving through legs look effective and aren't very hard to learn."

Last year Pudsey reached advanced level in HTM. The talented pair have competed at Crufts in the activity for three years and in agility for about four years. According to Ashleigh, people shouldn't expect immediate results but should be prepared to put in a lot of hard work, time, and patience before being able to match Pudsey's abilities. "How long it takes a dog to learn tricks depends on how much time people put in, how much the dog really wants to do it, and whether he's a quick learner," she continued. "Owners need to realise that dogs don't know anything at first - they're

not born knowing how to stand on their back legs. Many people try something and then give up when they think it isn't working. The important thing to remember is to persevere and keep going with it. The handler is the one who has to put the time in to be able to get their dog doing what Pudsey does."

Pudsey is the first dog Ashleigh has done HTM with. She didn't attend training classes but researched information and took advice from books. However,  Ashleigh said HTM classes were good for beginners to get started and to help socialise dogs. "I'd been to obedience and agility classes but I didn't know of any HTM classes where I live," she explained. "All our moves are self-taught. I read some books and did my research; I didn't have much of a clue what to do at first so I looked at what other people were doing. "There are so many different ways to teach tricks to a dog. I tried out different things with Pudsey to discover what he liked and didn't like. Make sure you try different ways of doing something; if one doesn't work, try another way.

"Have an open mind. Not every training session will go perfectly - Pudsey and I had our bad times too. I think that helped to make our routines better. If you have a problem, work through it by giving your dog lots of confidence and praise."

Above all, Ashleigh said, the most important thing was to have fun with your dog. "Enjoy it as much as possible - don't always take it too seriously," she added. "Don't put too much pressure on your dog, and know him inside out."

Moves to get you on your way...

Want to give some simple HTM steps a try? Ashleigh demonstrates how to teach your dog three basic tricks... 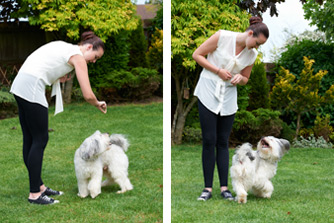 1.  Have a tasty treat between your finger and thumb. Slowly guide your dog in a circle with your hand. Keep your hand quite low at first so he can see the treat. Teach your dog to spin one way before teaching him the other way. When your dog understands the move and can turn in a circle, introduce a command. Ashleigh uses ‘Back' for anticlockwise and ‘Close' for clockwise.

2. When your dog has learned the command, start to move your hand away. He might not spin round the first time you attempt this; if this is the case, keep practising with your hand. Repeat to spin in the opposite directon.

1.  Have a tasty treat in each hand - Ashleigh uses cheese or ham when teaching Pudsey. Stand with your feet shoulder-width apart, depending on the size of your dog.

2.  Lean slightly forward, show your dog the treats in your hands, and guide him through your legs with the treats in a figure of eight. Ashleigh advised to guide the dog front to back. Give him the treats. Later, introduce a command; Ashleigh uses ‘Legs' but you could use ‘Weave' or ‘Through'.

3.  When your dog has mastered it, move your legs away by slightly moving them to the side while continuing to stand still.

4.  When your dog has got this, step forward and get him to weave through your legs while you're moving.

1.  Get your dog to sit - this makes the trick easier. Lift his paw a couple of times and give him a treat while holding it. Make sure you teach him to lift one paw before moving on to the other.

2.  Begin to introduce a command - Ashleigh uses ‘Left' and ‘Right'. Start to hold your hand out and say your chosen command. Your dog should lift his paw. When he does, give him a treat. Repeat each step for the other paw.

And here's what you might be able to do some day...

How Ashleigh taught Pudsey one of their BGT routine moves - the conga.

1.  Have a treat in each hand. Stand with your back to your dog and your hands on your lower back. Coax your dog on to his back legs and put his front paws on to your back. Give him a treat. This might not be a good trick to teach very large dogs; with small dogs you might need to kneel.

2.  When you no longer have to help him to put his paws on to your back, gradually move your hands away. Begin by moving them from your back to your hips.

3.  Move your hands from your hips to your chest, and finally away altogether.

4.  Move forward slowly one step at a time. Your dog should follow you with his paws on your back. After each step give him a treat. Gradually build it up to move faster. Eventually your dog should keep his paws in the air without resting them on your back.

Here are Ashleigh's top five training tips for starting out in HTM.

1.  Time and dedication are essential. When Ashleigh fi rst started HTM with Pudsey, she spent half an hour to an hour each day going through tricks and different moves before thinking about routines.

2.  Find out your dog's favourite food and toy and make sure he knows that he gets rewarded with them when he does something right.

3.  Give clicker training a go. Although it doesn't work for everyone, it's simple to learn and very effective.

4.  Always stay positive, even if a move doesn't work out the way you want it to.

5.  Practise in different locations - the park, your garden, and other people's houses. This is important if you want to compete with your dog, as the atmosphere at shows can be daunting for some.