Time on your hands? Then why not teach your dog some new skills with the help of a target stick. Karen Bush explains how.

Target stick training is fun and easy to teach; you don’t need much room, making it a perfect exercise to try if you’re stuck indoors or have a tiny garden, and it can be a whole new way of communicating with your dog!

What is a target stick?

A target stick is a lightweight rod with a knob or ball at the end; you can make one yourself using a piece of dowel, a wooden spoon, or even a pencil. Once you’ve got started, it’s worth buying a telescopic one though, as this allows you to adjust the length. It also means you can fold it up so it fits in a pocket, and you can carry it around ready for whenever you need it, not just during planned training sessions. Some also have a handy, combined clicker button. 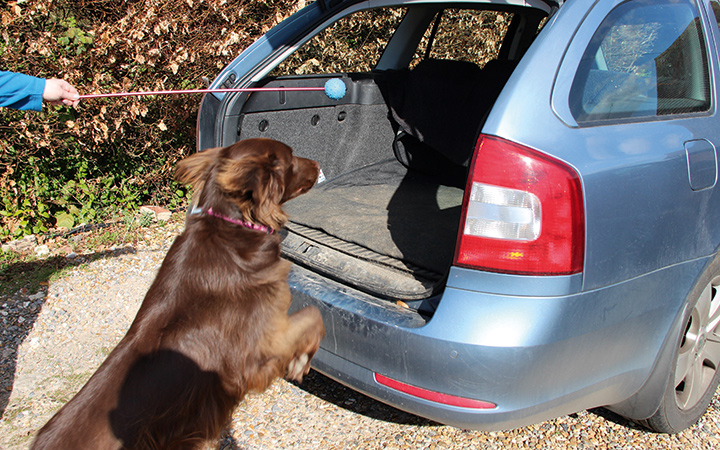 Why teach your dog with a target stick?

The aim is to teach your dog to first touch the end of the target stick with his nose, and then to follow it as you move it. It’s a simple idea, and once your dog has got the hang of it, has a wide range of uses including: 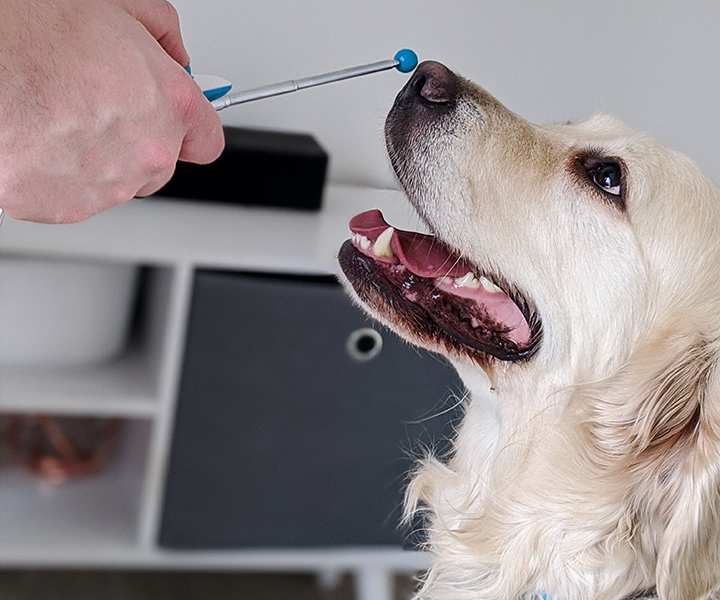 Teaching your dog to touch the target stick

1. Hold the target stick out so the end is about 1cm away and slightly to the side of your dog’s nose. He may be curious and want to investigate it straight away by touching it with his nose. If he does, either use a clicker if he is used to one, or your usual verbal word, such as ‘Yes!’ or ‘Good!’ to mark the action, and reward with a treat.

2. The aim is to encourage your dog to nudge the stick, not for you to touch his nose with it. If he doesn’t show much interest, try moving the target stick behind you for a few seconds, then re-presenting it. Alternatively, try adding a dab of peanut butter, cream cheese, or pate to the end of the target stick; the instant he touches it, mark the moment with your clicker or word, and give him a treat from your hand. Don’t allow him to lick, mouth, or chew the stick.

3. Repeat until your dog understands that nudging the target stick earns him a treat. Some learn very quickly, others need more time over several sessions.

4. Once he’s grasped the idea, progress to moving the tip of the target stick — a little to the right, or to the left, or a little higher or lower than his nose, as well as directly in front of it. Keep it simple for him by only moving it a little way, so it’s easy for him to reach.

5. When your dog will nudge the target stick every single time, add a verbal cue ‘Touch!’, saying it just before you present the stick, and rewarding as normal when he does.

If your dog mouths or bites at the target stick, or touches it along the side, don’t click/reward. To reduce any frustration, throw a treat on the ground a short distance away from you to give him a break before re-presenting the target. 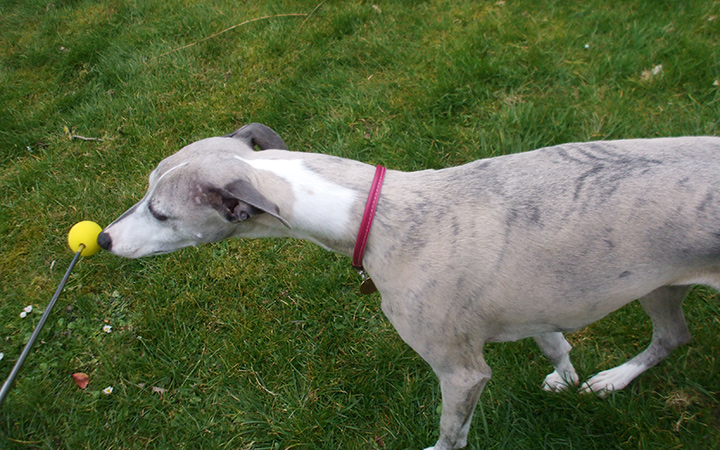 Once your dog has learned to touch the target stick, teach him to follow it.

1. Present the target stick, but as he moves to nudge it, slowly move it a few centimetres away so he has to reach out a bit further to touch it. Mark the moment with your clicker or word as usual, and reward with a treat.

2. Repeat several times, gradually progressing to moving the target stick a little further away so he has to begin to move after it. Mark and reward the moment he takes a step towards it — don’t ask too much, too soon.

3. Build on this over several sessions until your dog is happy to follow the target stick for several steps, working up to longer distances. 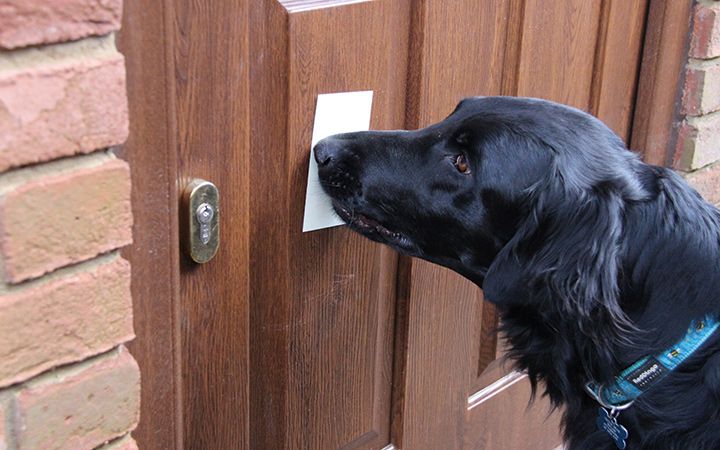 You don’t have to stop at using the target stick. Having learned the behaviour and added a cue word to it, you can transfer the action to other items such as a jar lid, post-it note, drinks coaster, or your hand, by showing the object to your dog, asking him to ‘Touch’, and rewarding him when he does. You can then use the skill to teach him to do things such as shutting doors, ringing a doggy doorbell, or to improve heel work. The only limit is your imagination! 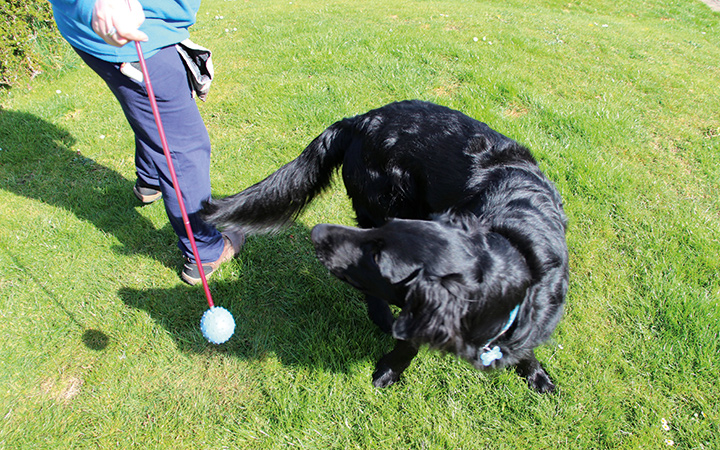 Use the target stick to teach your dog to move in a circle. Ask for just a few steps to start with, and gradually build up to a whole circle. 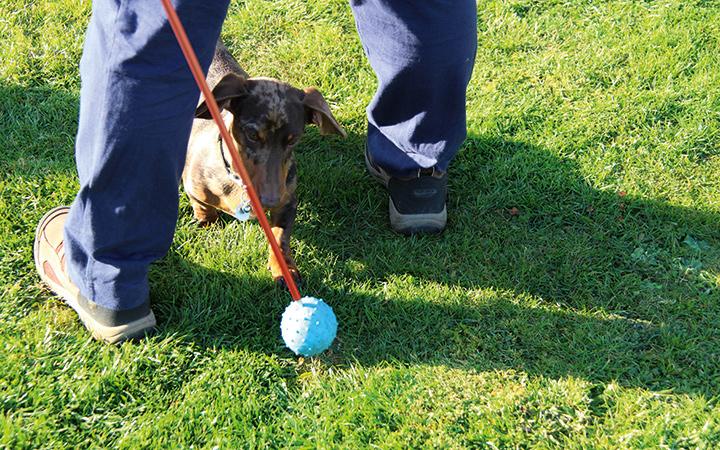 As well as being an impressive-looking trick, this can also help keep your dog supple. Stand in front of him (with your left leg forward and heel raised so your knee is slightly flexed to create more space if your dog is large), and use the target stick to lure him through, from front to back. Click as he passes through, and toss a treat onto the floor just in front of your foot so he’s ready to turn back to repeat the manoeuvre. Repeat until he can fluently weave round your left leg, then teach him to do the same around your right one — then put the two together to create a full figure-of-eight weave pattern