How to manage excitable dogs Anyone with experience of dogs will know that while some can be pretty laid-back and easy going in nature, others could not be more different.

From the moment they wake up, until the time they go to bed, their ‘on’ switch never seems to go off. They may have trouble settling, focusing, concentrating, or even keeping still for just a few minutes on a walk.

These are the dogs you will commonly see barking, whining, or pawing and digging the ground when their owner
stops for just a moment to talk to somebody else.

They cannot stand the stillness vacuum, and always have to be on the go, as if possessed by some canine form of ADHD (attention deficit hyperactivity disorder); in fact, this behaviour in dogs often mirrors that found in humans with the same condition.

Dogs like these may also have a range of obsessive-compulsive behaviours or rituals that they like to indulge in on a regular basis, such as digging, chewing, or chasing things. However, it is important to stress the difference between compulsive activities in dogs that are purely behavioural, and those that might have a more medical root (see ‘Could your dog’s compulsive behaviour have a medical cause?’ on
page 40).

If I were to pick the breeds who most regularly fit the profile of a more excitable/obsessive dog, they would include Border Collies, spaniels, and many  terriers. Dogs who, typically, will have been bred to maintain high levels of energy and reactivity for their working roles, as well as an obsessive singleness of purpose — a willingness to keep repeating the same task, or sequence of behaviour, again and again. But in truth this behaviour can occur in any breed.

Owners can often find them rather exhausting companions, and may get quite heated or agitated when faced with a perpetually fidgety, barky, or whiny dog, which usually makes the problem worse. The more sensory provocation — by way of shouting, or pulling around on the lead — you load on to an already highly aroused dog, the even more excitable or reactive he is likely to get.

Alternatively, owners may try to wear their dogs out with activities like constant ball chasing, which simply ramps the dog’s adrenalin levels ever higher, meaning it will take longer afterwards for the dog to mentally wind down again.

It is far better to recognise that the heart of the issue for dogs like these is their struggle to maintain and sustain a healthier state of mental balance.

What you have to work on most are exercises that make calmer behaviour the more consistently rewarding option for them. 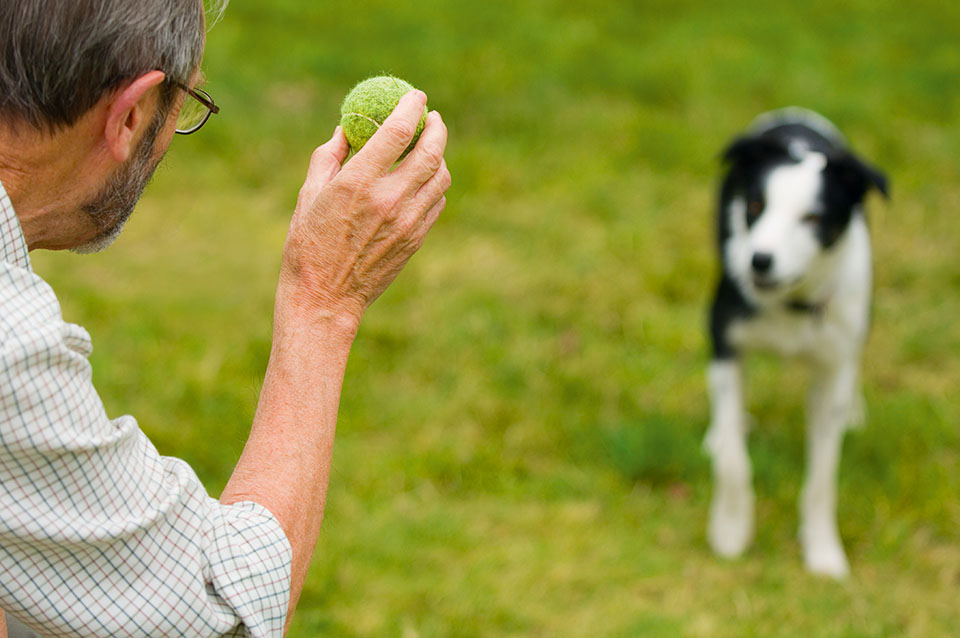 Beware of ramping up your dog’s excitement levels with constant ball chasing.

One of the most common problems owners have with more excitable dogs is a constant struggle to both obtain and hold their attention for any meaningful length of time — more than a few fleeting seconds. This makes it that much harder for the dog to either register, or respond to, any training command you might give him to attain calmer behaviour.

However, I still find that a main reason dogs cannot concentrate on their owners and commands is that no one has ever taught them how to do this properly when they were younger, or made it more rewarding for them to do so. Owners may not always realise that maintaining focus and attention on them is something they have to persistently teach dogs to do, from earliest puppyhood onwards. 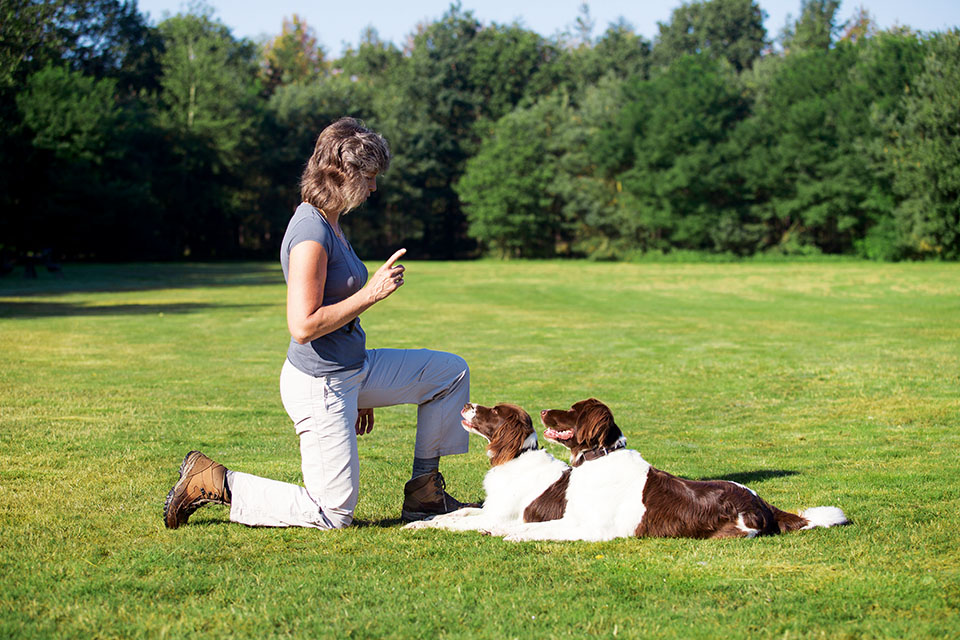 Getting your dog to focus on you requires regular practice.

Often dogs that are deemed to be more over-excitable in nature just require far more daily exercise or mental stimulation, to keep them in a healthier psychological state.

Different forms of environmental stress or anxiety can also lead to dogs appearing more permanently ‘buzzing’, restless, or reactive in their behaviour. If your dog is a pretty calm individual at home, for instance, but only becomes more manic when you go out with him, frenziedly yapping at everyone or everything in sight, then some degree of social anxiety is likely to be driving this. Either way, until you can identify and address the different stresses or anxieties occurring in any dog’s life, you cannot stop the more acute behavioural symptoms that accompany them. 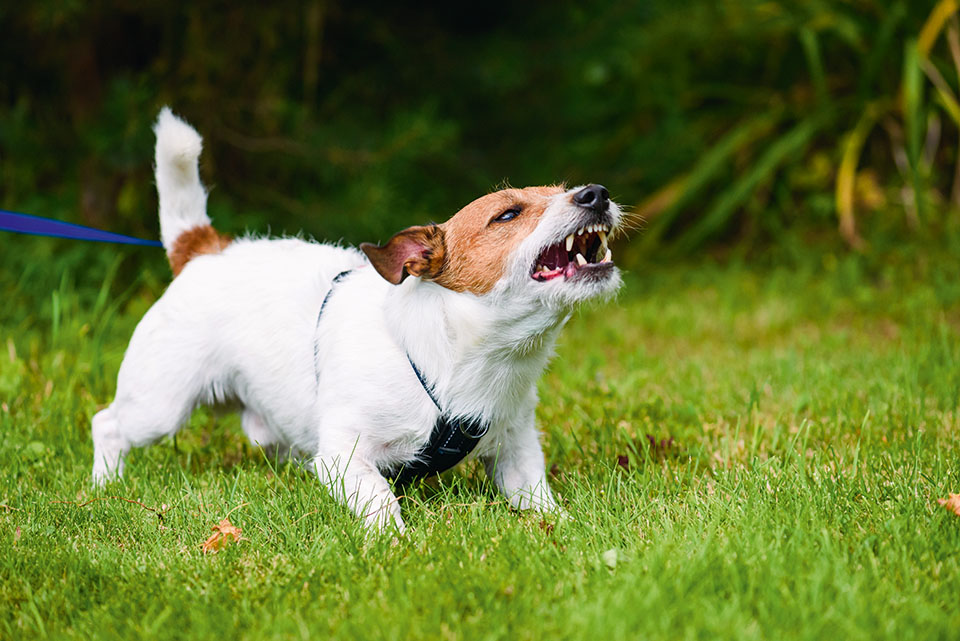 You need to assess whether social anxiety may be driving your dog’s behaviour.

In order to own a calmer dog, you first have to have a better picture in your mind of what your dog looks like in his calmest, or least aroused, state. Then think of his mind like a thermometer, with the calmer behaviour being the blue, lower temperatures, rising upwards to red, where all the higher mental temperatures and levels of arousal start. More excitable, reactive, or even aggressive, behaviours in dogs always emanate from these higher mental temperatures.

Very often dogs get too heavily rewarded with attention for ‘red zone’ reactive and excitable behaviours, when you need to train your dog to find the blue zones far more rewarding instead. Begin at home with simple exercises like sit and  ‘watch me’. Hold a tasty treat in your hand above your dog’s head, with a forefinger pointed up between your eyes, so in watching the treat he is also watching your eye area.

Where people tend to go wrong in this exercise is in not consistently prolonging the amount of time the dog must watch you, or keep his concentration on you, before rewarding him with the treat. So, if say you reward your dog only after a second of watching you, you will only ever get a second of his attention before he expects his treat. Slowly build up instead to five, 10, or even 20 seconds of watching you before he is rewarded, which also has the effect of greatly improving his levels of concentration on you.

Do this exercise as often as you can daily, before your dog gets anything at all rewarding like his meal, a treat, or a walk. And always do it the moment you see your dog’s mental temperature begin to rise, so that it falls back down again. 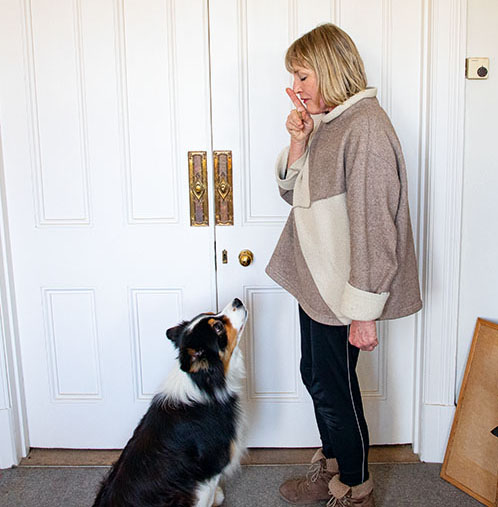 With the treat in your hand, point your finger upwards between your eyes, so your dog looks at you.

To keep highly excitable dogs more frequently in the blue zone, they are also best kept in their own quiet area, away from all the greater sensory input created by the average domestic home, in terms of sound, light, and movement (TVs, loud music, or people talking loudly or becoming more energetic). It is not advisable to indulge in animated or rough and tumble games with more excitable dogs, as this can ramp up their levels of arousal and reactivity.

Scent work, where your dog is encouraged to find treats, toys, or even his daily food allowance around the home or garden, can not only keep him calm but also improve his general powers of focus and concentration.

Over time you will start to discover the exercises and strategies most likely to keep your dog in the blue zone, and make him more responsive to you and your commands. However, additional to this training, higher drive dogs will still need plenty of physical exercise daily to work off their energy. 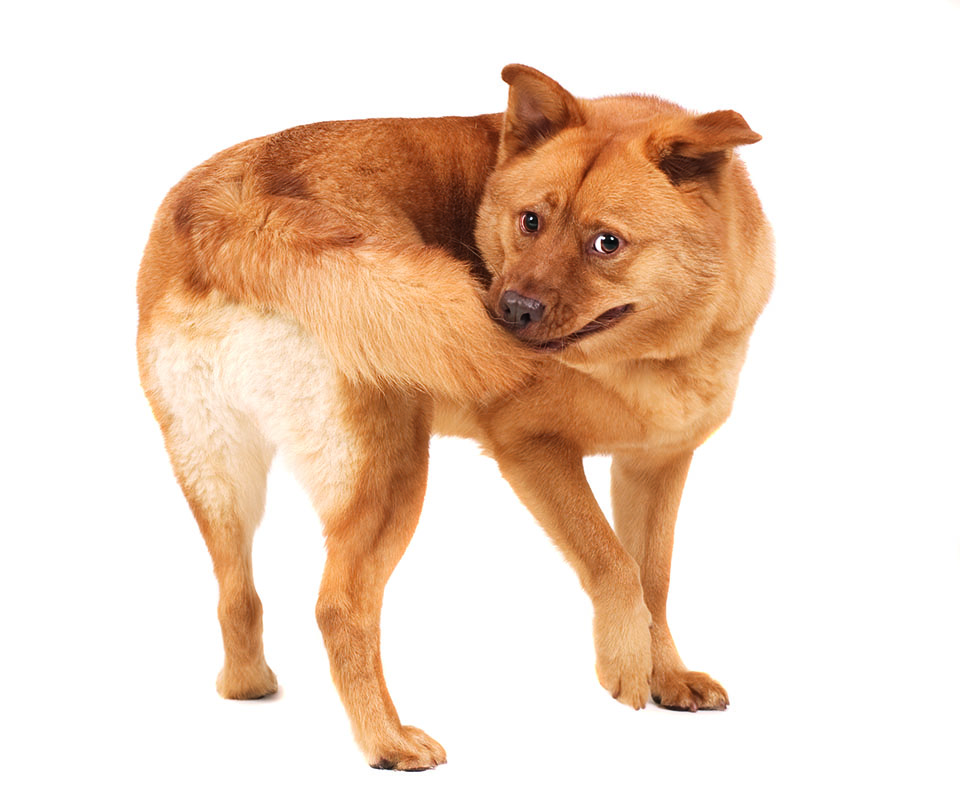 Tail chasing can be a compulsive behaviour.

Could your dog’s compulsive behaviour have a medical cause?

Common compulsive behaviours in dogs include:

● Persistent licking or chewing of objects (or themselves).

● Tonguing or licking the air.

Do be aware, however, that they are not all purely behavioural, as many dogs exhibiting these behaviours have some underlying gastric, neurological, or dermatological condition, so it is always helpful to investigate these first.