How do I teach my dog to be calm around visitors? 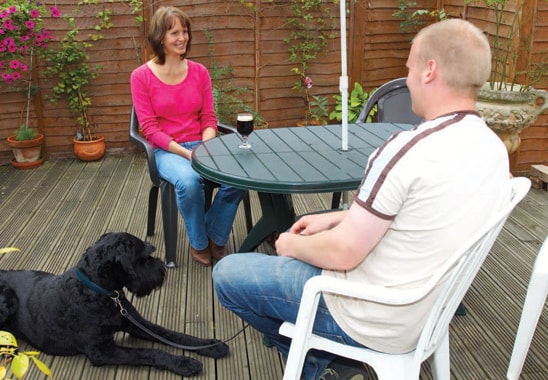 If your dog becomes overexcited as soon as you have visitors in your home, then Steve Goward has a few tips to teach your dog what is and isn't acceptable...

Q) We have a seven-month-old Shar Pei X Staffie, who we've had since he was four-and-a-half weeks old. He gets really overexcited when people come to visit. He goes crazy - jumping up, licking, and even mouthing people's hands. We have tried shutting him outside or in a different room but he is still just as crazy. We have also tried ignoring him but he still jumps up. He also loves jumping on the sofa over and over again, all over people, and nearly knocking hot drinks and wine out of their hands.

A) Canine behaviourist Steve Goward says: The first thing I'd ask is how you acquired him at four-and-a-half weeks? At this age he will have missed out on some really important learning from his mum and littermates. The generally accepted age for rehoming a puppy is eight weeks as this gives the puppies the opportunity to socialise with mum still present, and learn valuable lessons in play and bite inhibition.

Your dog's reaction to visitors to the house is not uncommon in young dogs, especially if this behaviour has been rewarded in the past. Often people will encourage very young pups to jump up and reward them with a game or affection.

Consistency is essential to help your young boy learn what is acceptable. To undo his previous learning you will need to keep him on a lead initially when visitors come in.

Reward his good behaviour with affection and/or treats to start him down a new road that teaches him that visitors are a good thing but there are some rules attached. Ignoring him or shutting him away is likely to lead to frustration and this is where alternative behaviours will often present themselves, like barking or mouthing.

Other things to consider are training classes to help his self-control in various situations, and ensuring he is appropriately exercised and mentally stimulated with positive training sessions on a regular basis.