Help your dog avoid trouble with other dogs Is dog-on-dog aggression on the increase? Is there any way you can help your dog to avoid getting into trouble? Andrea McHugh reports.

As we emerged from lockdown, dog owners previously confined to local areas were able to enjoy exploring further afield, meeting new canine friends. Sadly, increasing media reports of dog aggression, possibly connected to lack of socialisation during the pandemic, are causing growing concerns about how we keep our dogs safe.

There is little scientific research to confirm increasing numbers of dog-on-dog bite incidences, but there has definitely been a huge spike in dog ownership. The Pet Food Manufacturers’ Association estimates there are now over 12 million pet dogs in the UK — a rise of two million dogs in one year. This dramatic increase could in itself be problematic, together with inexperienced owners unable to access hands-on training.

Animal welfare campaigner and behaviourist Jordan Shelley, who has specialised in running reactive dog classes from his home in the New Forest, suggested: “I recommend owners consult a reputable professional behaviourist, but in the meantime, if you have a reactive dog, then always keep him on-lead in public. Extending leads are not great, and long lines must be managed properly. Muzzles can be useful, but seek professional advice to help your dog accept wearing one.”

The causes of conflict

Dog trainer and Your Dog contributor Tony Cruse explained: “Dog-on-dog aggression mainly occurs because of fear, panic, and/or misunderstanding, perhaps due to conflict over resources such as a toy. Fighting is very much a last resort for dogs, which is why you see posturing such as teeth baring, raised body height, and stiff tail. Unfamiliarity and fear can both be addressed proactively with socialisation to ensure that young dogs meet other dogs in a positive way. If both dogs are confident and well-socialised there will be no need for disputes. To create a positive experience there should be no raised voices, lead jerks, or stress. Dogs pick up on stress, which then creates a negative experience and makes the situation worse. This can escalate to a dog being unable to deal with any social situation.”

But what should you do if an off-lead dog charges up to your dog? 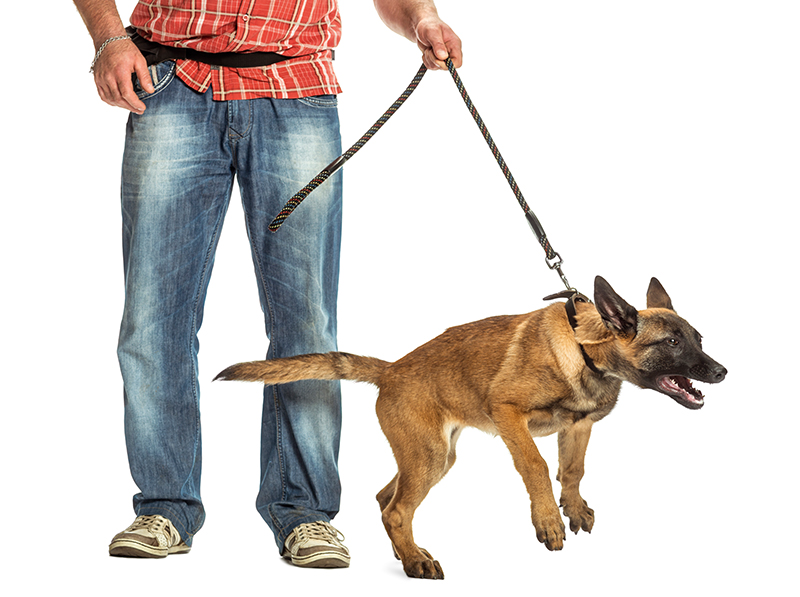 A tight lead will make your reactive dog even more tense.

“Firstly, don’t panic,” advised Tony. “Even if you feel angry, try to say hello to the other dog in a nice, soft tone or your dog can pick up on it. If you can give your dog a treat before the other dog gets to you, that can be helpful but avoid throwing down treats as this can cause competition between dogs.

“A tight lead creates tension and prevents dogs displaying natural body language, so try to keep your lead slack. Aggression is rare, but if you see a dog-on- dog attack there is often a lot of bluster and noise, and the occasional torn ear. Don’t put your hand anywhere near the dog’s collar to pull them apart, as this can cause the dog to turn and bite. Instead, try to create some sort of shock to interrupt the proceedings, such as a loud noise, spraying with a hosepipe, or throwing a bucket of water if there’s one nearby.

“Afterwards your dog will experience a spike in cortisol levels, which can take days to return to normal. Don’t shout or scold either of the dogs, as the chances are you will scold the wrong dog anyway. This can be even more difficult in a house full of dogs. Separating household dogs is important, but be careful not to always take the same dog out of the room. Consult a reputable behaviourist for help, one who practises positive reinforcement training.”

Jordan Shelley has another theory about what could be a contributory factor.

“I think we’re now asking dogs to live quite restricted lives,” he explained. “In the past, dogs were more ‘latchkey dogs’ with much more freedom, able to mooch outdoors and decompress naturally from stressful situations. Now dogs are micro-managed and so far removed from how they evolved to live that I think it’s contributing to what we’re seeing. The happiest dogs I’ve ever met lived full, rich lives on farms, with freedom to mooch and do what they liked to do naturally. 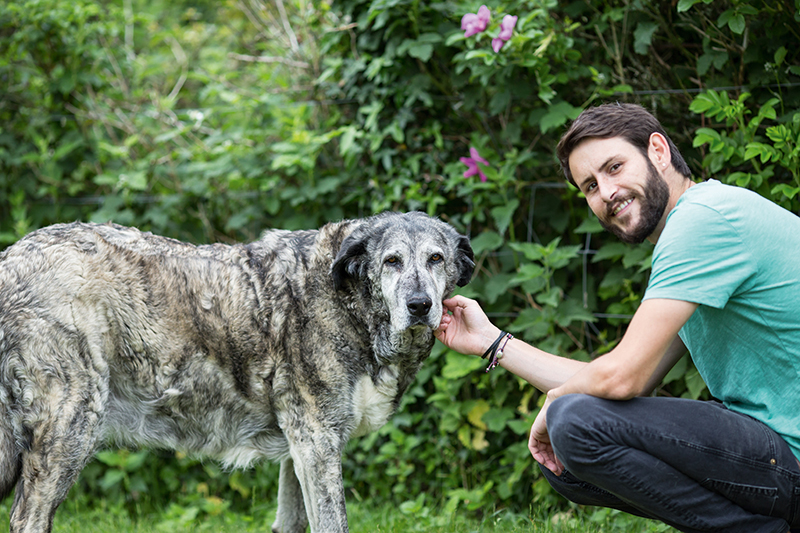 “We need to allow dogs to be dogs. To help dogs relax and regain their freedom, you could try things like tracking, scent detection, or my favourite — just letting your dog decide where to go on a walk, taking a picnic, and enjoying slowing down and relaxing together. Founder of The Institute of Modern Dog Trainers Steve Mann’s ‘15-minute backpack walk’ is also a great relationship building and mindfulness exercise. It involves the dog mooching on a long line, and some slow, calming exercises using the backpack contents, which include a scent article, a chew, food, plus an item the dog can safely explore the shape and feel of. It’s well worth googling the 15-minute backpack walk and trying this, so dogs can calmly learn to accept new feelings, thoughts, and sensations.”

Laying down the law

Trevor Cooper of DogLaw.co.uk is a solicitor who specialises in how the law impacts on dog owners. The legal position with regard to dog-on-dog attacks is far from clear.

“Unfortunately, it is not as simple as saying your dog came off worse, so the other dog must be responsible,” he explained. “The Dangerous Dogs Act is specific towards dog bites on people or assistance dogs, but silent on the issue of dog-on-dog incidents. It may apply if during a dog-on-dog bite incident a person was injured or feared injury, but if the incident was solely between dogs and the victim’s dog is not an assistance dog, it is difficult to see how the Dangerous Dogs Act could apply. Parliament has been aware of this loophole since 1991. 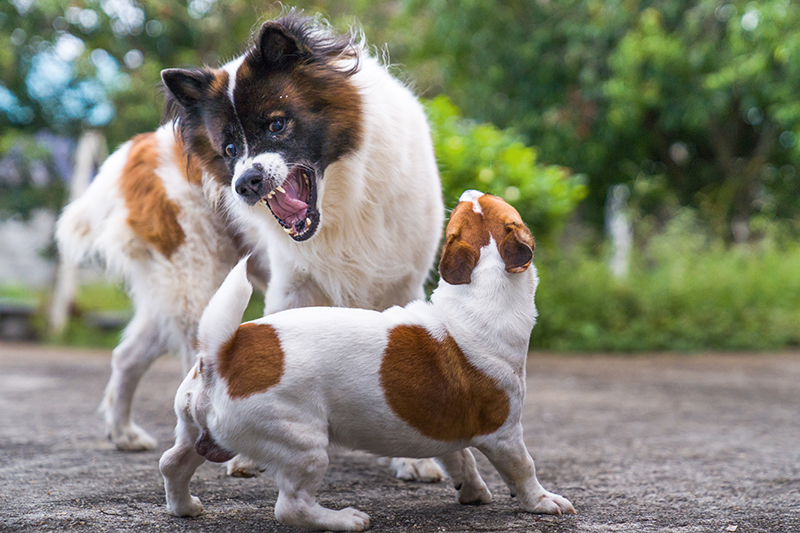 Unexpected encounters, where one dog runs up to another, can lead to aggression.

“There is, however, the Dogs Act 1871, which was repealed in Scotland but applies in England and Wales if a dog is dangerous and not under proper control.
A single incident is not generally enough to persuade a court that a dog is dangerous, unless the incident is exceptional, in which case the court can make an order for a dog to be kept under proper control or even for it to be destroyed.

“The injured dog’s owner could bring their own proceedings to recover veterinary fees. If they can prove the dog has bitten before or the other owner was negligent, this may be worth pursuing. I strongly advise getting as much insurance as possible to cover legal and veterinary fees, and to ensure dogs are trained and socialised.

“If you own a reactive dog take steps to ensure you cannot be held responsible for an incident. Some people use yellow reactive dog bandannas and muzzles, but there are many other resources, so talk to a behaviourist or seek a veterinary referral.”

Cinnamon Trust volunteer Zoe Mensing, from Weymouth, Dorset, and her husband were walking their 10-year-old cross-breed Buddy plus a client’s Shih Tzu when Buddy was attacked by another off-lead dog. 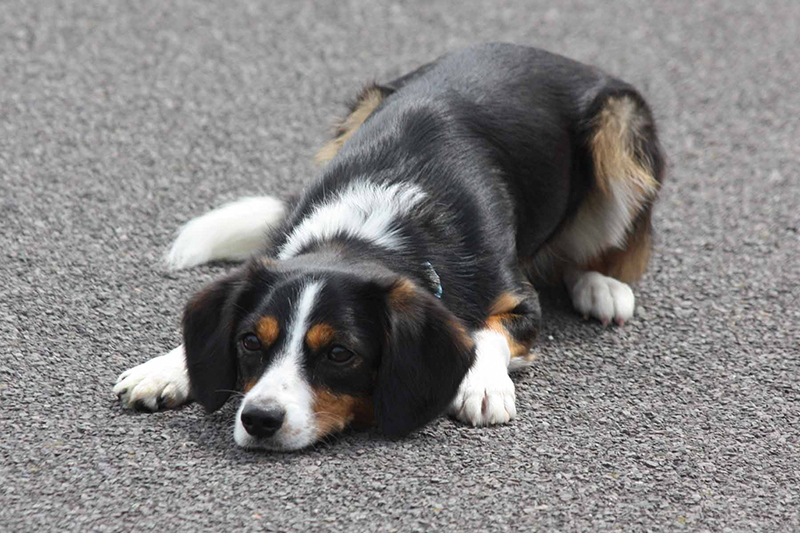 “The dog launched itself at Buddy’s neck and wouldn’t let go,” said Zoe. “Buddy was screaming! It took three of us to get him off, and the other owner ran away. Poor Buddy was left with a huge, open neck wound which couldn’t be stitched and took weeks to heal. It cost us £400 in vet’s fees, and despite a newspaper appeal the other owner was never found. I don’t volunteer for the Cinnamon Trust any more, as I’d have to walk in the same area.”

Jimmy was only six months old, enjoying a lead walk in the local country park with my husband Neil,” recalled Lucy Keating, from Brize Norton, West Oxfordshire.“Another man had a dog on an extending lead, plus two small children. As Neil walked past, the dog lunged at Jimmy’s hindquarters and wouldn’t let go. Eventually the owner got him off and Jimmy was taken to the vet, but as it was during lockdown, we couldn’t go in with him, which was awful. We were asked for permission to amputate his leg if required. Thankfully, our amazing vet saved his leg, and after many months he has now healed physically. He has however become quite reactive, so we are seeing a behaviourist for this. 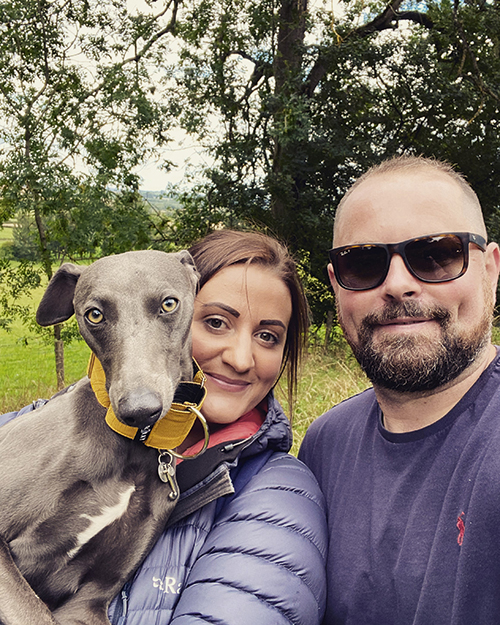 Lucy and Neil with Jimmy. 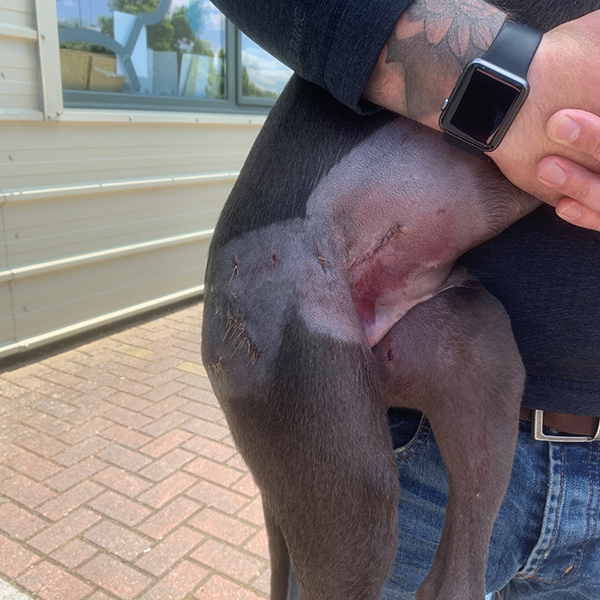 Jimmy during his recovery.

“The other owner had his dog put to sleep, and paid for our veterinary care, which I understand is quite unusual.”

My two-year-old Dobermann, Douglas, was anaesthetised to have X-rays for possible hip dysplasia,” recalled Nate Garton, from Leeds, West Yorkshire. “The vet advised a short walk afterwards, and suddenly Douglas spun round and I saw a stray dog coming for him. I tried to turn Douglas with his collar, and he mistakenly grabbed me. At the same time, the other dog grabbed my face and tried to pull me along. I quickly got Doug off me and he went between my legs while I prised the other dog off my face, and got away as fast as possible. 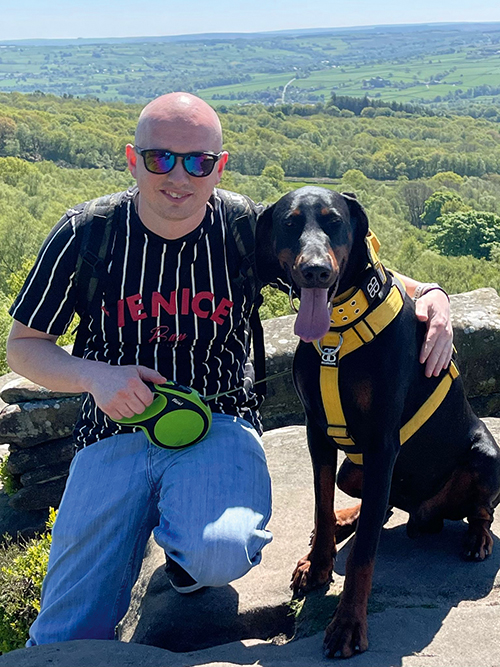 Nate and Douglas, who has become very nervous following his ordeal.

“I had four bites through my ear and needed surgery. There were concerns that my hearing would be affected but thankfully I’m OK.

“Although Douglas escaped physical injury, he is now very nervous and reactive, so we are working with a behaviourist to help get him back to the boy he was before.”