In our new series, Dr Jacqueline Boyd takes a closer look at canine nutrition and how to choose what’s best for your dog, starting with the question: are dogs really carnivores?

Canine nutrition is one of the hottest topics in the dog world — what to feed, and how and when to feed it are subjects continually discussed and debated. You’ll probably hear as many opinions about dog food as there are brands and types available!

This means that knowing what or who to believe can be tricky for many people who are simply wanting to choose well for their dog.

How to distinguish fact from fiction, and knowing who to trust for valid information can be difficult. However, having an understanding of some of the basic nutritional biology of the dog can be a great place to start.

In this three-part series, we’ll be exploring aspects of domestic dogs that impact on their nutrition and feeding, from teeth and digestive biology, to their poo, and the hidden population that lives in our dogs’ digestive systems but is increasingly recognised as having profound effects on their whole bodies!

In this first part, we consider what our dogs are from a dietary perspective, and examine one of the most common digestive debates: are our dogs carnivores, omnivores, or herbivores? And how does this affect what we feed them, and the feeding choices we make for them?

The diet of any animal is important for the survival of that individual and for the species as a whole. Carnivores are animals that predominantly eat meat, such as bears and cats; omnivores eat a mixed intake of meat and plant material, with pigs being typical examples, while herbivores such as rabbits, cattle, and horses eat plant material. These very clear definitions however are often blurred in real life. Many carnivores will eat some plant material. It has even been recorded that some herbivores will occasionally consume animal-derived material, either through choice, nutritional need, or, simply, availability!

In considering the diet of our dogs, we have to think a little about their background. Dogs have evolved alongside humans for thousands of years and are thought to be one of the earliest domesticated species. As a result, they are found almost everywhere in the world, and the global feral and free-living dog population is much larger than the global pet dog population.

While dogs have evolved beside us, they have shared our lives, our environments, and even our diet, including our waste. The natural scavenging behaviour of dogs is likely to have been important in keeping human settlements clean and tidy. Evidence even suggests that dogs were critical for maintaining a degree of hygiene by cleaning up human faecal waste!

This exposure of dogs to our lives, combined with selective breeding for particular appearances, behaviours, and other characteristics, has meant that dogs have developed clear genetic changes that permit them to be better adapted to life with us. This even includes the ability to digest starch, a type of carbohydrate found in many plants and plant-derived material such as grains. Notably, this ability to digest starch is not necessarily observed in the dog’s closest relative, the grey wolf. Indeed, using the wolf as a model for the domestic dog is not necessarily correct. The fundamental biology is similar, and wolves have been observed to consume a wide variety of foods, but there are also some clear differences between what is a largely wild species and our very much domesticated dogs. 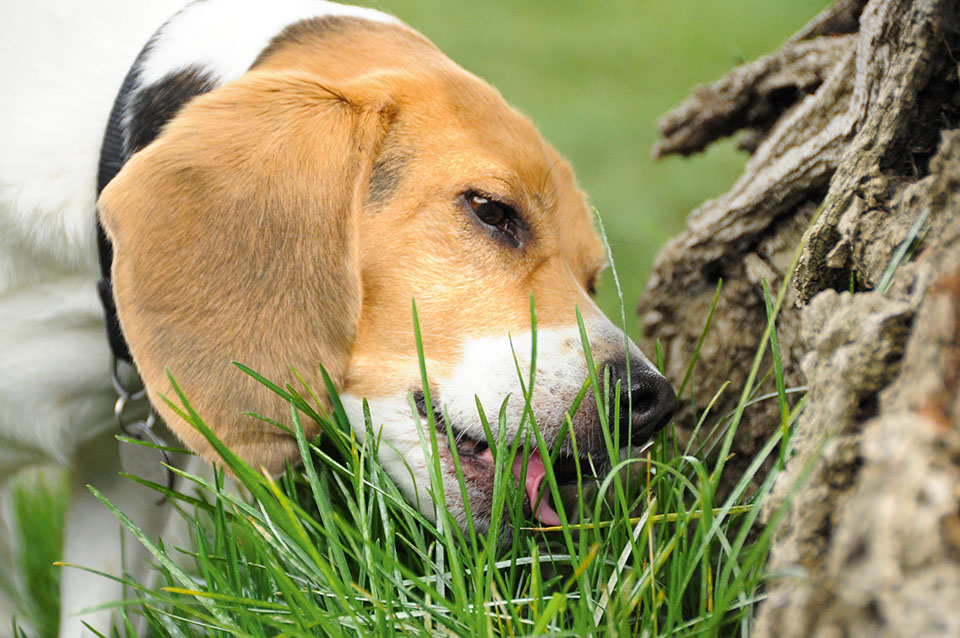 You may find your dog enjoys grazing when out on a walk.

Classified by diet and dentition

However, dogs and wolves belong to a grouping of animals called the order Carnivora. Zoologists classify animals based on their characteristics, and members of Carnivora are distinct in having teeth adapted to the cutting, tearing, and shearing of meat. This is clear in our own dogs even today, with their sharp, pointed canine teeth. Dogs also have a very carnivore-typical arrangement of teeth called the carnassial apparatus. This is where upper and lower teeth towards the back of the jaw overlap and, during chewing, act like a pair of scissors for shearing through animal tissue.

The digestive system of the dog, from nose to tail, is also relatively short and simple when compared to plant-eating animals such as cattle, horses, or sheep. Indeed, the dog’s digestive system lacks the ability to process and digest a large amount of plant material in the same way as these species can.

The dog’s stomach can expand dramatically, allowing a large amount of food to be eaten in a short period of time. This is characteristic of animals who would have hunted and scavenged without knowing where their next meal was coming from. Indeed, many pet dogs retain the behaviour of a typical scavenger, by eating as fast as possible with minimal chewing!

All of these points mean that dogs are carnivores because of their biological classification, their teeth, and their digestive system. However, giant pandas are also members of the Carnivora, have a carnassial apparatus, and yet largely consume bamboo. This is where simple labelling of animals can become blurred and dogs become less strictly viewed as full carnivores in terms of their diet. Like many things in biology, the story is a little more complex than at first glance! 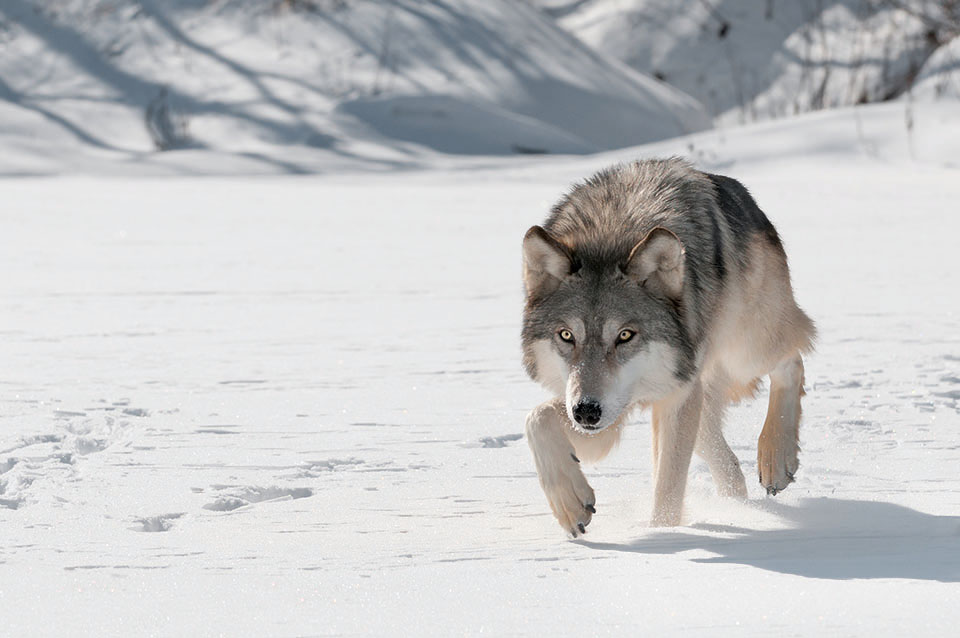 There are clear differences between the dog’s closest relative, the wild grey wolf, and our own domestic pets.

We now recognise that absolute categories can be difficult when it comes to animal diets. Even members of Carnivora will differ in how much meat they actually eat. For example, let’s compare cats and dogs for a moment: cats typically have 30 teeth in total; dogs typically 42. This means dogs have more teeth in their jaws and a larger area for the processing of any food consumed. However, unlike us, dogs are very limited in their ability to chew and can only chew in an up and down fashion as their jaw and skull structure does not allow a side-to-side motion as our jaws do.

Cats typically hunt and eat small meals frequently throughout the day; dogs tend to be viewed as gorge feeders and will eat a large amount in a short time. Cats also need very specific nutrients that can only be obtained from consuming other animals; dogs have developed the ability to make many of these compounds. This means that the need for animal material in the dog diet is much less critical than for cats.

As a result of these, and many other biological differences, cats are often identified as obligate (or true) carnivores. This means that cats NEED meat in their diet and effectively cannot use plants for nutrients at all. While dogs will generally choose to eat meat over other foodstuffs, they can use other material as a source of nutrients. Dogs can even survive on a well-formulated vegetarian diet, although that is a subject for another day! This means dogs are often called facultative carnivores, or even omnivores, to acknowledge their ability to eat and use a variety of foods to provide nourishment.

So, if the dog is biologically a carnivore but can consume, process, and use other foods as a source of nutrients, what does this mean when it comes to feeding him? At a basic level, this tells us that dogs can live well off a range of foods. Indeed, free-living and feral dogs will eat a huge variety of foods, from dead, decaying animals and hunted prey, through to discarded, processed human foodstuffs. While this might not be nutritionally perfect,
many such dogs do surprisingly well. 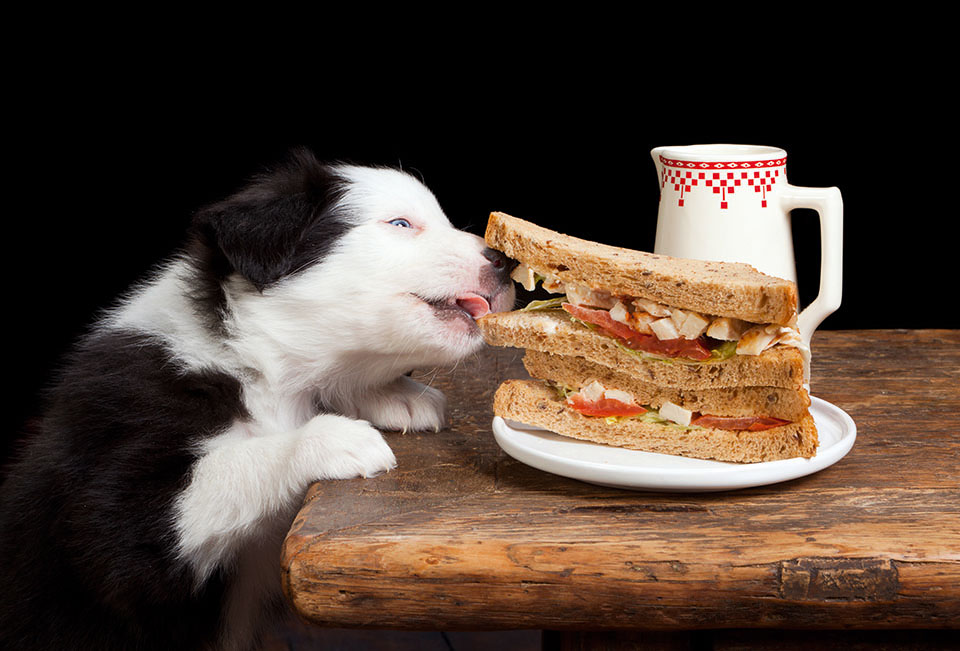 As scavengers, many dogs will eat a wide range of food, given the opportunity.

Ultimately, what you feed your dog is your choice. Providing a dog can eat, process, and digest anything eaten, then the nutrients contained within can be used. Many domestic dogs are seen to graze on young shoots of grass, actively pick fruit, and will scavenge a range of foods (and even non-foods!) when opportunity knocks. 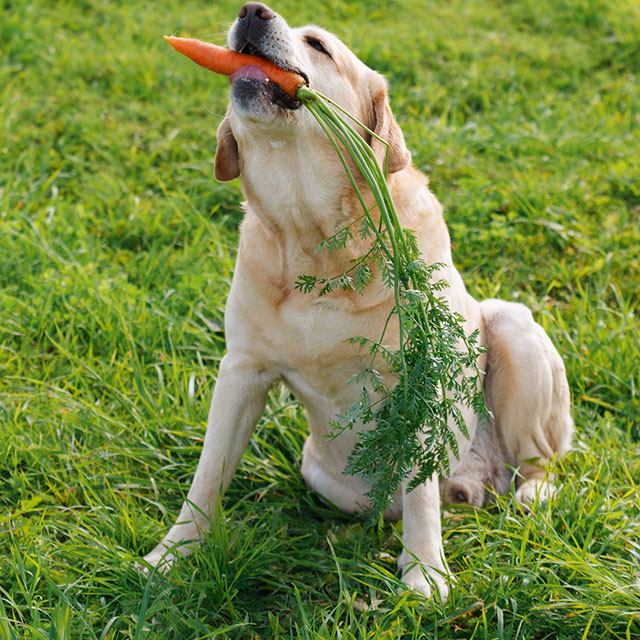 Many dogs enjoy a bit of veg in their diet.

Dogs even have taste buds that can detect sweet tastes. Unfortunately, this sometimes means dogs eat things they shouldn’t, such as chocolate; it tastes good to them but sadly can be toxic. Many dogs have very mixed diets, consisting of both animal and plant material. Indeed, commercially produced dog food of all types often contains some plant material; some raw and wet diets will be supplemented with fruit, vegetables, and other ‘botanicals’ for nutritional value as well as human visual appeal. Extruded kibble diets contain grains or alternative sources of starch (such as potato) for nutritional value, as well as having a functional value for making the kibble. It is also worth noting that dietary fibre, which can be essential for digestive and anal gland health, often comes from plant material, further highlighting the potential value of a mixed diet for our dogs. 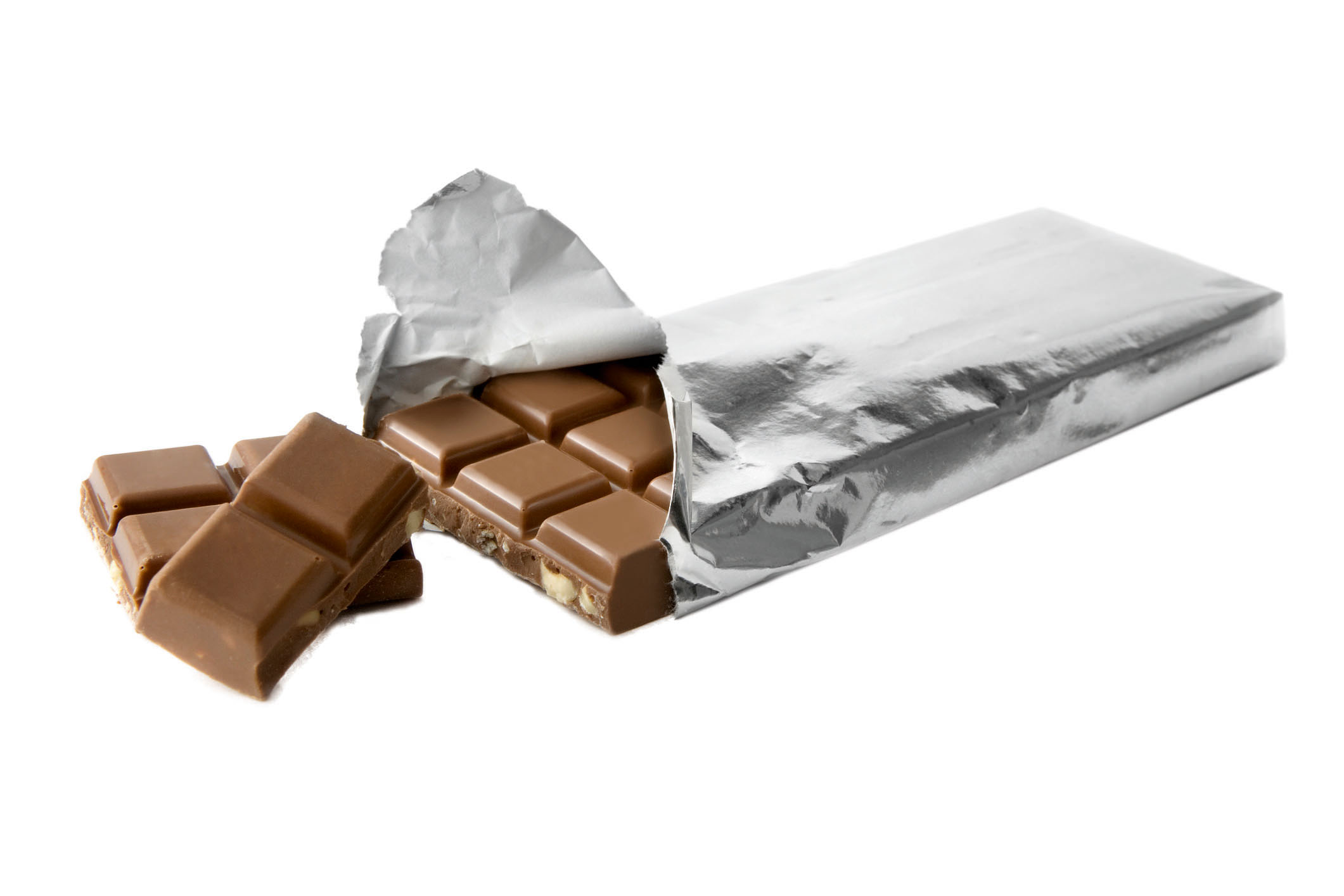 Sweet foodstuffs — such as chocolate — are attractive to dogs but harmful.