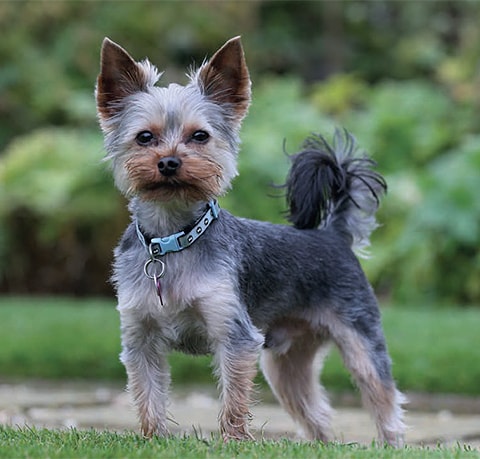 Average lifespan Up to 15 years

About the Yorkshire Terrier

Yorkshire Terriers may be tiny, but these dogs have big personalities — and don’t they just know how fabulous they are! These little pocket rockets have so much to offer.

One of the smallest breeds of dog, not only are Yorkies incredibly loving, but they can enjoy plenty of activities and excitement with their favourite humans. Diana Rich, vice chairman of the Yorkshire Terrier Club, says: “They’re very lovable and cheeky. They absolutely love attention, and the more time spent with them, the bigger the bond between you will be. They love to play chase or fetch.”

Yorkies will bark when people come into the house but, as with any breed, you can train them into better behaviour — but if you let them yap, they will! It’s down to the owner to train them and let them know who’s boss.

Diana says Yorkshire Terriers can be quite protective over their people and properties, but they will never be vicious or aggressive, making them great family pets. They’re also good with children and other pets.

“If there’s a bigger dog in your house, then the Yorkshire Terrier will be in charge!” Diana adds. “It’s like they have ‘small dog syndrome’ — a small dog with a big mouth! But they’re such personalities and they’re extremely loving.”

Despite his small stature, the Yorkshire Terrier is brilliant at activities such as agility and obedience, with many classes offering ‘mini agility’ for smaller dogs.

“They also make brilliant Pets as Therapy dogs,” says Diana. “They respond very well to it. They’re a very versatile breed; the more you do with them and put into their training, the more you’ll get out of them.”

Due to their small size and loving natures, Yorkies make excellent companions for elderly people. “They don’t take up much room and don’t need much exercise — just two half-hour walks a day are needed,” says Diana. “When they go on walks, they will go and go, and won’t stop until you get home — then they’ll sleep for Britain!”

Yorkshire Terriers can be prone to cataracts, which tend to develop as they get older, from around 13 years and over.

Diana says: “Smaller dogs have smaller joints, and can therefore have joint issues and knee problems as they get older, especially the so-called ‘teacup’ Yorkies.

“As humans get older, they start to have health problems, and it’s the same for dogs — as Yorkies are smaller and live longer, they can suffer from age-related issues, more so than larger dogs.” Short-haired Yorkshire Terriers are quite low maintenance to look after, as Diana explains: “If you keep their fur clipped, they won’t need much grooming — maybe once or twice a week, with regular baths.”

If you get a long-haired Yorkie, you’ll need to give his coat a daily brush, or have him clipped regularly. The Yorkie coat is very fine — much like human hair — so needs extra care and attention if you intend to keep it long, and especially if you intend to show your dog.

The history of the Yorkshire Terrier

The breed dates back as far as the 1800s and owes its origins to the old working Black and Tan Terrier, with infusions of Maltese and Skye Terrier blood.

It is thought that Scottish labourers travelling to work in the mines and cotton mills of Yorkshire brought their terriers with them, and these provided the basis of the breed. A dog named Huddersfield Ben, born in 1865, is credited as the foundation of the breed.

The placid, small-built dogs soon became popular with ladies as house pets. The breed was officially recognised by the Kennel Club in 1886, and The Yorkshire Terrier Club, one of the oldest breed clubs in the UK, was founded in 1898.

Yorkshire Terriers have proved very popular among celebrities, with A-listers including Natalie Portman, Whitney Houston, Joan Rivers, and Britney Spears all owning Yorkies during their lives.

You can also spot many Yorkshire Terriers in popular films, including the terrier belonging to Mrs Coady in the 1988 John Cleese film, ‘A Fish Called Wanda’, and Sharpay Evans’ pet dog, Boi, in hit teen flick, ‘High School Musical’.