60e74fa6-2e8a-486c-9f60-5bf5bee953a9
The St Bernard is one of the most recognizable, biggest and gentlest dog breeds, not to mention one of the most expensive dogs to keep.

History of the St Bernard

The St Bernard is a true giant of the dog world, and everybody recognises this legendary life-saving dog with his massive jowled head, gentle eyes, and short, thick orange and white coat.

The St Bernard breed was developed in the 18th century by monks at a hospice offering aid and shelter to travellers in the Swiss Alps. In 1774, it was recorded that these dogs were being used as rescue dogs to locate travellers in need of help. Their fame grew and for a while they were called Good Samaritan Dogs. It is thought that over 2,000 travellers have been saved by St Bernards.

It isn’t just mountain rescue at which St Bernards excel; one St Bernard called Bamse, ship’s dog of a Norwegian minesweeper in the Second World War, won a PDSA award for his courage. He was stationed in Montrose, Scotland, and one of his duties was to collect his shipmates from the pubs at closing time! He became so well known in the town that upon his death, in 1944, local schools closed to allow hundreds of children to attend his funeral. Today, his grave is still honoured in Montrose. 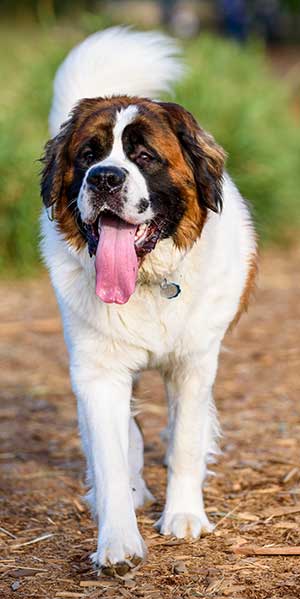 The St Bernard is a gentle giant, although one that is capable of defending their owner and property. Slow thinker, steady pacer, and an amazing unity with children. Quick learners if taught kindly but can be stubborn and boisterous.

The Breed Standard stipulates the taller the better. It is essential that balance and soundness be maintained. Minimum height for dogs 75cm, bitches 70cm.

Hip Dysplasia is a big problem in the breed, but Hip Scored or Health tested parents will help choose a healthy puppy - a good breeder will have these. These are large dogs and as a consequence come with a few health issues and a lower than average lifespan. Feeding the right amount and only using food of a good quality is vital.

Big dog, big bills, big slobber... be prepared for what you are taking on. Early socialisation is vital as they grow so fast.