ee9537ac-8468-4c32-bd76-6f37bcf59d64
The Miniature Schnauzer is a very distinctive breed, with a bearded muzzle and big bushy eyebrows. With his quirky looks and huge personality, this hardy little dog has it all.

It is believed that the Miniature Schnauzer was developed in Germany from the Standard Schnauzer, which was cross-bred with the Affenpinscher and the Poodle. It was officially recognised as a separate breed in 1933 and, therefore, it is the most modern of the three types. The breed is part of the utility group, which consists of a varied group of dogs, most of them bred to perform a specific function. The Miniature Schnauzer was originally bred by farmers to hunt vermin, as well as for guarding property and livestock. Each type of schnauzer has the long-bearded muzzle, developed to protect their faces from any retaliation from their prey. The breed can be one of four colours - pepper and salt; black; black and silver; or white. 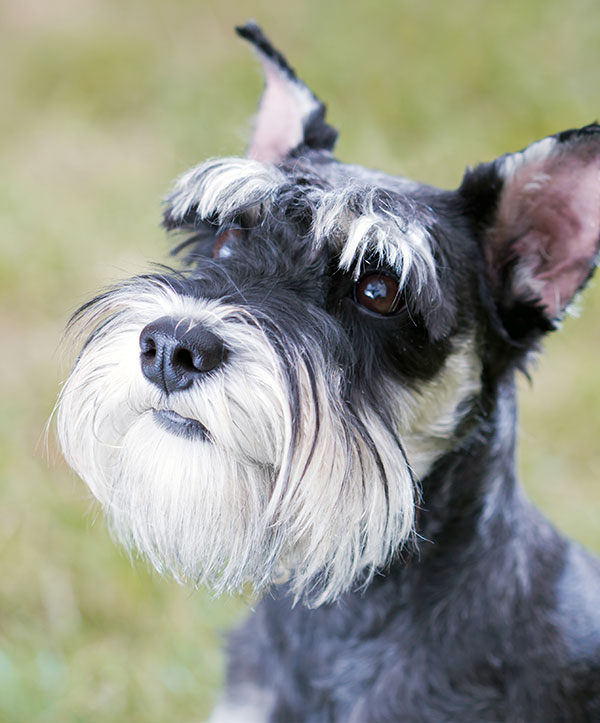 Miniature Schnauzers are very sociable and friendly; they get on extremely well with people and other dogs. They are also intelligent, which makes house-training them relatively straightforward.

They have bags of personality, which is often likened to that of a terrier. But, the beauty of them is, they don’t have the urge to hunt small animals or dig holes in your gardens like terriers do. Some can be quite vocal, while other owners say that barking is not a problem with their Mini. They are very rarely aggressive — if they are, it tends to be because of a negative experience that has happened in their life. Bitches tend to be more emotional, whereas males tend to be more placid.

Responsible breeders will eye test any dog or bitch used for breeding on an annual basis. All puppies should be eye-screened and breeders should be happy to show you the relevant certificates to show they are clear from diseases. There isn’t a DNA test available for these conditions, but the Animal Health Trust (AHT) is currently trying to find a DNA test to try to identify the gene which causes CHC.

Minis are ideal for people who like to go walking, but can’t commit to two half-hour walks every day. They will happily go out for hours with you at the weekend, but are also happy to have shorter walks some days, and won’t punish you if you can’t get out and about other days. However, it’s important not to turn your Mini into a couch potato. If you want to participate in dog activities with them, they’ll happily turn their paw to agility, obedience, rally, or anything else you want to try. There are also many instances where Miniature Schnauzers have been used as Pets As Therapy dogs.

Although many people incorrectly refer to them as being hypo-allergenic, Miniature Schnauzers might be a good option for people with allergies, as moulting is minimal.

In order to keep their coat in tip-top condition, you need to groom them at least twice a week; their coats are quite fine, so you should be able to groom their beard and feathers easily with a comb.

When committing to a puppy, you need to be aware that they either need to be taken to the groomer’s every eight to 10 weeks, or you can learn to clip and groom them yourself. A groomer will either hand-strip or clip their back, while the legs, stomach, beard, and eyebrows, are kept longer.

The ideal home for a Miniature Schnauzer

Miniature Schnauzers are extremely versatile, small dogs, and, as long as they’re well cared for, they’re happy to live in any size property. Although all dogs need a secure garden, you don’t have to worry about Minis finding a small gap in the fence to escape through, and they’re not destructive either.

They get on well with children, particularly if they are socialised with them from a young age, and are the type of dog to bond with the whole family. If you want a Miniature Schnauzer puppy, then you should be prepared to wait up to nine months for one from a good breeder. They are a popular breed, so you can easily pick one up from an online seller, but this is strongly advised against. You’ll rarely find a Mini in a rescue centre — and if they do ever find themselves needing a new home, they are often snapped up immediately.

A Miniature Schnauzer’s coat can be one of four colours: pepper and salt (most commonly seen), where the hairs are banded in shades ranging from light silver, through to black; pure black; black and silver, where the jacket is solid black with silver markings on areas of the body including the legs, eyebrows, muzzle, and chest; and white.