Exercise requirement Twenty minutes twice a day as a minimum.

●Coat care: Ten minutes brushing every day keeps on top of the coat, but it needs combing out on a regular basis. Reputable breeders accustom the pups to the brush and comb from four weeks of age. Samoyeds shed their coats once or twice a year, when everything comes out, so daily combing helps.

● Health: All reputable breeders have their dogs x-rayed for hip dysplasia. A lot go through the Kennel Club/British Veterinary Association (KCBVA) eye checking scheme although it’s not mandatory in the UK. Samoyeds, along with four or five other breeds, are more prone to diabetes.

● Character: Always happy with something to do, or just to sit with you, a bad-tempered Samoyed is virtually unknown; they were bred to work closely with people.

They’re known as the laughing cavaliers, because their lips turn naturally upwards, and they look as if they’re smiling.

● Trainability: Treats work well as most Samoyeds like food. It’s a good idea to take all puppies to basic training. They’re not slavishly obedient so they can be interesting to train!

● Exercise requirements: Twenty minutes twice a day as a minimum, but they are happy to go all day, every day. 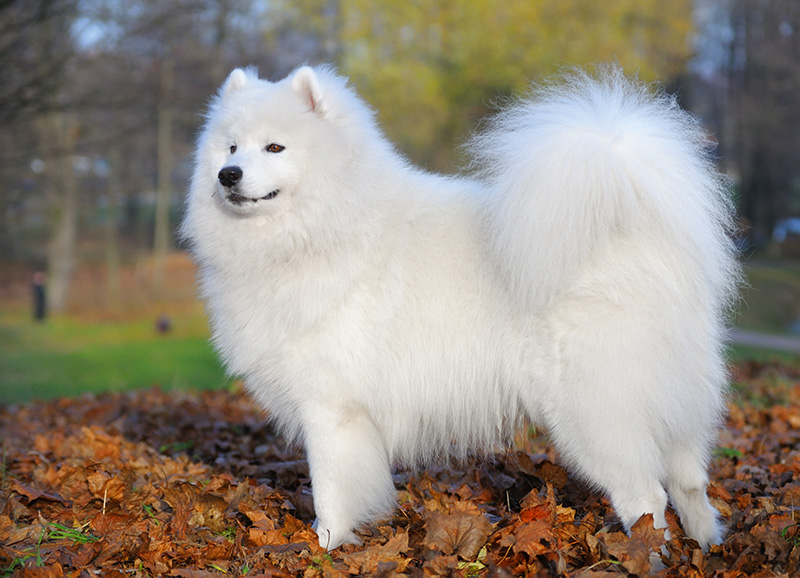 With his striking white coat and playful, loving nature, the Samoyed’s charms are undeniable. But that glamorous-looking coat needs daily attention, and his lively temperament needs intensive guidance, especially during puppyhood. Plus, these dogs yearn for company and interaction.

“Samoyeds are considered to be from the first generation of dogs who migrated north from Africa to Siberia,” explained Avis Haffenden, secretary of The Samoyed Association. “The tribespeople bred them to herd reindeer, but they slept with the family at night to keep them warm, so they’re very human contact orientated.”

The dogs guarded the settlements, not attacking bears or wolves that came near, but alerting their people to danger. To this day, the breed has a tendency to bark.

“You must tackle the barking at a really young age, otherwise they won’t stop,” warned Avis.

Samoyeds are also renowned for their intelligence. “We’ve had to turn the door handles upside down in our house because they learned to open the doors,” Avis continued. “They’re more than just simple herding dogs; they’re multi-tasking dogs who enjoy doing all sorts of things. They do need a decent bit of exercise, but, to be perfectly honest, most of all they like being with you and pleasing you.

“They’re not for people who are out at work all day; they do get bored and destructive if they’re left by themselves for hours on end.

“As long as you can cope with the coat, and you train them to stop the barking and the digging, they make really nice, family pets.”

Emma and Chris Holloway from Stoke-on-Trent, Staffordshire did a huge amount of research before getting their Samoyed, Luna. “She responds incredibly well to all dogs and people,” said Chris, “but especially to other Samoyeds.”

So, to keep their Sammy smiling, they started a group to allow them to meet up, and walk, with other owners.

“We posted on Walking With Clouds on Facebook, and there are 12 Samoyeds in our area,” explained Chris. “Everyone loves their breed, and meeting younger and older dogs. It reminds them of what their dog was like as a pup, and for us it’s great to see what Luna’s going to be like when she’s grown up.”

“You can tell they were bred as pack dogs,” Emma commented. “Luna loves every dog she meets, but it’s something different when she’s with her own breed. It’s like she can recognise them as being the same as her.

“I think it’s really important to speak to other people who own Samoyeds. They’re not common, and there’s all the coat-care routine, and the fact that they can have sensitive stomachs. Originally, they’d have lived in groups, so it’s important to let them get together. It gives them joy, and they learn things they wouldn’t necessarily learn living with humans.”

So far, Luna has surpassed expectations, but Chris emphasised: “They’re really beautiful dogs but a lot of effort goes into maintaining them. If people want to get one, they should make sure they do their research and understand the grooming and exercise requirements.”

Tell us about your dog.
“Casper is a three-year-old Samoyed. He just wants to play and engage with me. He’s a total goofball, genuinely loving, amazing with children. He’s too clever for his own good; he can open doors and stairgates; he completes every puzzle feeder in under a minute.” 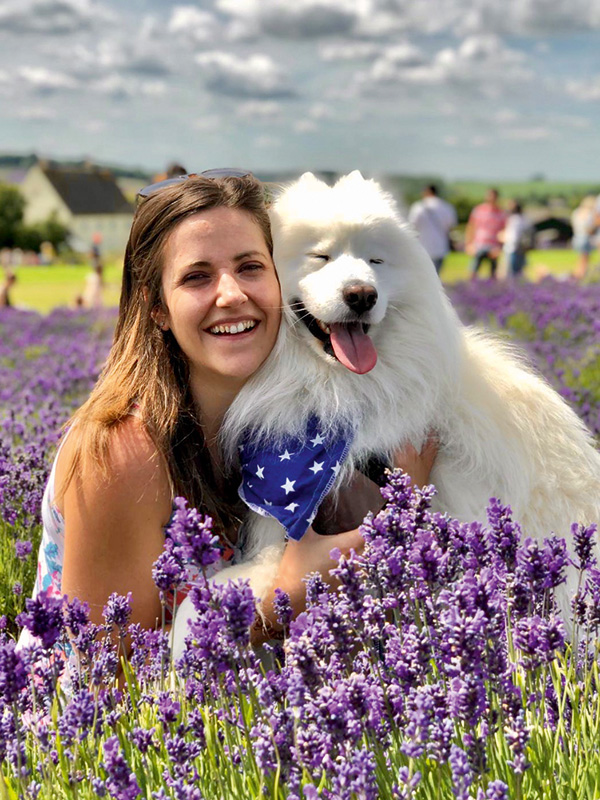 Casper and Kirsty in the lavender fields at Cotswold Lavender.

Why did you pick this breed?
“I wanted a dog who looked different, who was going to be good with children and young people, and who could cope with long walks. I googled dogs that looked like they were smiling and discovered Samoyeds. They ticked everything on my list — smiley, playful, and friendly — and I’m willing to put the effort in with grooming.”

Where did your dog come from?
“Yorkshire; I live in Oxfordshire. I was on a waiting list. Samoyed breeders are very fussy. I had an interview with the dad’s owner and the mum’s owner.”

What have been your happiest times together?
“When we go on holiday and get to go on adventures together, just the two of us, particularly the beach — that’s Casper’s favourite. He jumps through the waves, he digs, he barks; he adores it.”

Has your dog turned out as you expected?
“Yes and no. He’s friendly and good with children, but I wasn’t expecting the food fussiness. And I wasn’t expecting how sensitive he is; he’s so in tune with my emotions. I had depression and anxiety when I got him, and I realise there’s a couple of things that can cause him to go off his food, and one is my mood dropping. If I’m starting to feel low, he stops eating.”

Any advice to other potential owners of this breed?
“Be prepared to groom! You’re not allowed to cut their coats. Get a good hairdryer and keep on top of the grooming. Make it fun from when your dog’s a puppy. Samoyeds are amazing, but make sure you’re willing to put the work in. Get a dog walker in if you go to the office all day. They’re not the kind of breed that will sleep all day.”

Sum up your dog in one sentence.
“A fluffy, loving, joy-giving goofball.” 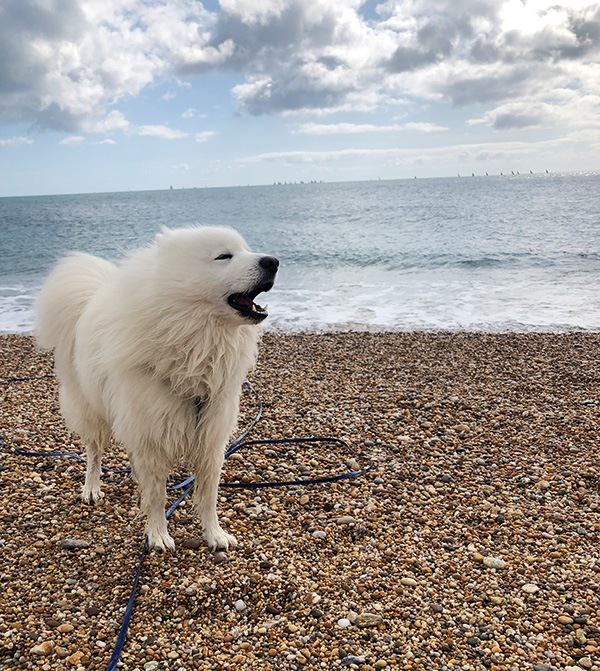 Casper feeling the wind in his fur on a Devon beach.

How easy is he to care for?
“It depends on the day and his mood. Training him when he was a puppy was intensive and he needed a lot of work. Now, other than the eating, I find him quite easy.”

Would you have another dog of this breed?
“Yes, I’m desperate for another Samoyed, I just can’t afford one!”

How have you found training your dog?
“Great fun. It can be quite challenging and stressful at times because he’s not food motivated. It’s much easier to train exercises when he’s on the move rather than those that require him to sit still.”

What activities do you and your dog most like to share?
“The beach, agility, parkour, and paddle boarding, although Casper prefers paddling.”

INFO: For more information about Samoyeds, visit The Samoyed Association’s website:
www.thesamoyedassociation.co.uk or check out the Kennel Club website: www.thekennelclub.org.uk