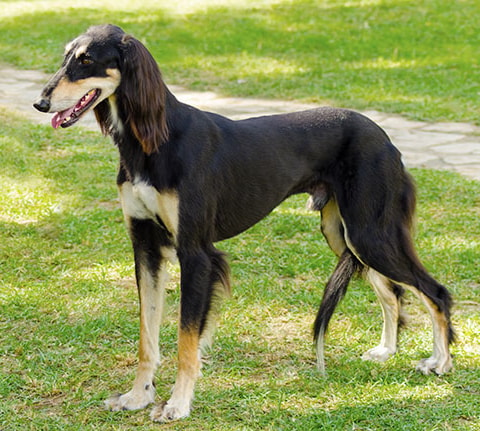 3029c5e9-c4b6-49b3-97fb-9d65d0d69ede
The Saluki is an independent, elegant breed that dotes on human company and family life yet will escape given the first opportunity!

History of the Saluki

The Saluki is one of the most ancient breeds and was originally bred to hunt hares, foxes, and gazelles. They were much beloved of Middle-Eastern royalty and, indeed, seem to remember this well; they often behave as if any kind of training or listening to commands is totally beneath them! Those who love them, however, recognise and admire their independent, free-spirited nature, along with their elegance.

The Saluki dates back thousands of years, and carvings of these dogs have been discovered in the area that became Egypt, dating back to 7,000 BC. In ancient Egypt itself, the Saluki was known as the Royal Dog, and, when one died, his Egyptian owners went into deep mourning, and often had their dogs mummified wearing their ornate collars. In the tomb of Tutankhamun, the boy king is shown with his beloved hounds, which all appear to be Salukis.

The Saluki was used as a ceremonial hunting dog, and would hunt in small packs of somewhere between two and six dogs, using both their speed and intelligence to capture their prey and hold it until it could be ritually killed. They were often used in combination with hawks, and it is said that there is a special bond between Salukis and birds of prey.

Good with children reserved with strangers, the Saluki bonds closely with the family and therefore are difficult to rehome. Intelligent, sensitive, clean dogs. Hunting instinct is strong.

A big fence is needed - these are escape artists. Also be very careful off the lead - the urge to hunt may be more than the urge to come to you