Colours Light red to red wheaten. A small amount of white on the chest and a dark muzzle and ears are permissible.

b4339fec-aa5c-41c2-b581-50931fa6b6a7
The Rhodesian Ridgeback is an impressive looking, strong and muscular dog. Part of his original job was hunting lions (his other name is the African Lion Hound).

A scent hound, he would work in a pack to drive game towards waiting guns, or else he would corner his prey and hold it until hunters arrived. He is now prized in the U.S. and Canada as a breed capable of hunting bears.

Courageous and focused when working, calm and gentle whilst relaxing. Rhodesian Ridgebacks are excellent guard dogs but do require consistent training, especially to avoid any dominance issues arising. While this may be a pretty fearsome hunting dog, he is affectionate as a companion. He can be trained to a high level and enjoys having a job to do. He is, however, pretty standoffish with strangers, and has a rather spectacular and intimidating low growl if his protective urges come to the fore. 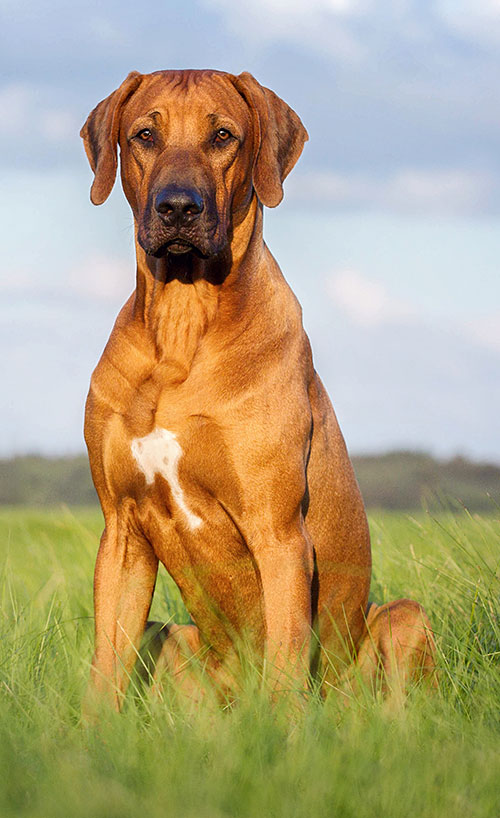 An ideal size of between 63-69cm is specified in the Breed Standard.

A breed affected by Hip Dysplasia but more seriously a condition called Dermoid Sinus, a cyst along the spine. This can be screened for at birth and surgery is available. Dogs who have been affected should not be bred from to maintain the integrity of the line.

As a large, energetic dog you must make sure you have the time and space to train and exercise them properly as they do not respond well to boredom and harsh control.

Interesting facts about the Rhodesian Ridgeback

The anatomical feature that gives the breed its name is the ridge of hair that grows down its back and makes it instantly recognisable. This ridge is formed by the hair growing in a totally different direction to the rest of the coat and is capped at the top with two ‘crowns’ (whorls) that are directly opposite each other; it is shared by only one other (far less common) breed, the Thai Ridgeback.

This may, however, be more than just an interesting coat pattern. Some researchers have found a correlation between the ridge and a congenital skin condition known as dermoid sinus, although this is fairly rare. Some more romantic breeders, however, say the ridge is: “where God sewed them up after stuffing them”!