4b6e93ce-56c7-460c-af5d-9a2dd86e798c
The Pyrenean Mountain Dog's roots can be traced back to before the Bronze Age. They belong to the pastoral group and have been used to guard sheep and cattle in the inhospitable climate of the mountainous regions of Southern Europe.

History of the Pyrenean Mountain Dog

These giants of the dog world were originally bred as livestock guards and would live permanently with their flock to protect them from thieves, or predators such as wolves. 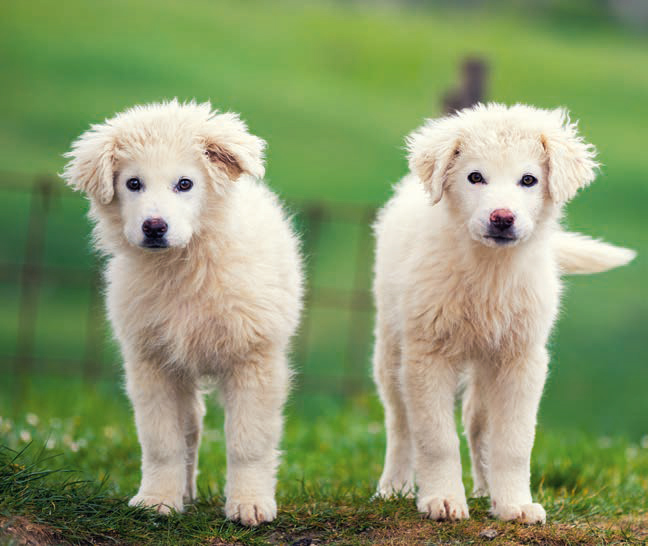 They were generally taken as very young puppies (sometimes as young as four or five weeks old) and placed with the sheep, so that they would bond very closely to them, and then protect them. They were often helped in this job by being given a fearsome-looking, spiked, iron collar to help protect their throat from wolf attacks.

These dogs were also used by smugglers in the late 19th century, as they could carry heavy backpacks of forbidden goods across the Pyrenees, taking paths impassable to humans and so avoid customs or checkpoints. Even if officials did spot them, nobody was going to argue with a dog this big!

The first Pyrs kept as pets had rather assertive, warrior like personalities but are now kind natured, patient and noble due to generations of selective breeding. They are courageous, affectionate and mix well with children and like to be included in all family activities. However, they can be aggressive towards other dogs of a similar size and to strangers making excellent guard dogs Their size and tendency to bark a lot make them unsuitable for urban areas. They are highly intelligent and can be stubborn, so it is important to train them from an early age.

Pyrs are highly resistant to disease. They are susceptible to bone and joint related problems due to their size. Deafness is also known in the breed due to the colouration of their coats. You can expect them to live up to 11-15 years.

Their history as a working dog has meant they have developed as a well-balanced breed requiring little special attention.