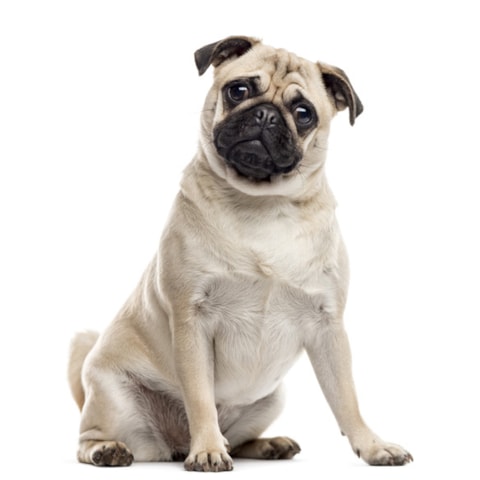 Temperament Intelligent and lively with a sense of humour

efc92f19-acca-4590-b41d-9c963084b112
Originating from China, the Pug was very popular with royalty and aristocracy. Nowadays they are popular pets as they are non aggressive and get on well with children. Celebrities love them too! In fact for the first time last year the Pug entered the Kennel Club's official Top 20 most popular breeds in the UK!

Forget the lapdog stereotype, this is a breed of many talents, as Julie Hill reveals.

Think of a sleek, energetic dog whizzing around an agility course, winning his class, and taking home rosettes and trophies, and we bet you’re not picturing a Pug!

Well, it’s time to meet Marsha, the Pug who’s putting the record straight, and spreading the message that these dogs can do pretty much anything that any other dog can do!

It’s amazing how the right dog and the right person often find each other. Susannah Chalmers, from Bubbenhall, Warwickshire, found her heart dog in Marsha, whom she adopted from MuffinPug Rescue in December 2015. Since then, two further Pugs — Poppy and Isaac — have joined the family, initially on a temporary foster basis, but both now permanent residents.

“Marsha was 18 months when I got her,” recalled Susannah. “She was a fully grown, fat, opinionated ‘blob’!” At that point Marsha was called Marsha Mallow, because: “She looked like a big, fat marshmallow.”

When Susannah registered with a local agility club, intending to train with her Pomeranian, someone commented that they were glad she wasn’t bringing her Pug along. Susannah’s response was: “Why can’t Pugs do agility?” Thus, Marsha’s transformation began.

It was a gradual start. Susannah said:  “I started playing around at home and when we were on walks, just little things; seeing if she would get on a log in the park or go under something, or climb something, and she was just so biddable and clever.”

When Susannah informed the agility club that she would, in fact, be training a Pug, there were gales of laughter. “But,” smiled Susannah, “within a couple of months no one was laughing!

“Marsha progressed really quickly. She’s got a flair for it, and she loves the training. She’s a delight to train!”

Soon, training developed into competing. “I remember our first competition; there must have been 55 dogs, and a lot of them were collies because it was a mixed class,” said Susannah. “We did a clear round, and I’d got in my car and gone home thinking: ‘We got a clear round, that’s good enough!’ and I got a message from my friend telling me I needed to go back because we’d won that class!

“That was the very beginning; the first show we ever competed in and we won our class, and I don’t think that feeling has ever been recreated since. I’ve got some good memories of winning some nice classes, but that first one was really quite something.”

Susannah was proving that not only could Pugs do agility, but they could excel at it. Such is Marsha’s talent, that she’s now achieved her Bronze, Silver, and Gold agility warrants. She’s competing at Kennel Club grade 4 in agility, and halfway to grade 5. She was also part of a team demonstrating dog parkour at Crufts last year.

Unsurprisingly, Susannah is justifiably proud of her groundbreaking dog. “Marsha is known in her own right, for her ability. She’s known now because she’s a force to be reckoned with, and she’s good at her job.”

But that success doesn’t come without preparation — all three  of Susannah’s Pugs enjoy a range of daily exercise.

“They get serious exercise in the morning,” Susannah revealed. “Normally I’ve walked them before seven o’clock, and they’ve done interval training, which is racing backwards and forwards on a field to get their heart rates going, and 10 – 15 minutes of agility!”

Not surprisingly, meeting the needs of her dogs has improved Susannah’s own fitness levels, and has certainly had beneficial effects on the Pugs. “My dogs have no breathing issues,” Susannah said happily. “They don’t snore, they don’t reverse sneeze, and they have no issues in hot weather whatsoever.”

Alongside the activity, Marsha, Poppy, and Isaac consume a healthy diet. They eat only their dog food, and Susannah keeps treats to a minimum.

“I cook a sausage — a normal pork sausage — and I cut it up into miniscule, tiny little… not even chunks, crumbs if you like. They’re now at a stage where praise has replaced food.” Susannah acknowledges that Pugs are food motivated, and in the early stages of training, treats provide great motivation. She advocates sticking to lower fat options such as carrot or broccoli, and using toys as a reward to harness the Pug’s play drive.

Susannah’s frustration at the current perception of the breed’s character and limitations, and her enthusiasm and determination to rehabilitate their image is engaging.

“They’re not people or children,” Susannah asserted. “They shouldn’t be fed sweets or chocolate. At the end of the day, a Pug is a dog; just the same as any other dog. I think a lot of the problem is that because of their characters people tend to humanise them.”

Through her affiliation with MuffinPug Rescue, Susannah has seen far too many Pugs suffering the consequences of obesity and lack of exercise. “A lot of people think they’re basically lapdogs, who have very little zest for life, or for doing very much at all, and we wanted to prove they actually can do so much more than people give them credit for.”

The sad truth is that some Pugs have health issues due to their breeding, but Susannah added: “Cutting back on the food and the treats, and increasing exercise, does improve that.”

Having seen Marsha — and numerous other Pugs — blossom and enjoy an active life, Susannah is aiming to ensure all Pugs are given the opportunity to fulfil their potential. “Most Pugs, if not all, have the ability; they definitely have the intelligence, biddability, and drive to do agility,” enthused Susannah.

“It breaks my heart; I have to be very strong because I could end up with a houseful of them, and in all of them there’d be some quality or skill that just needs to be tweaked out.” 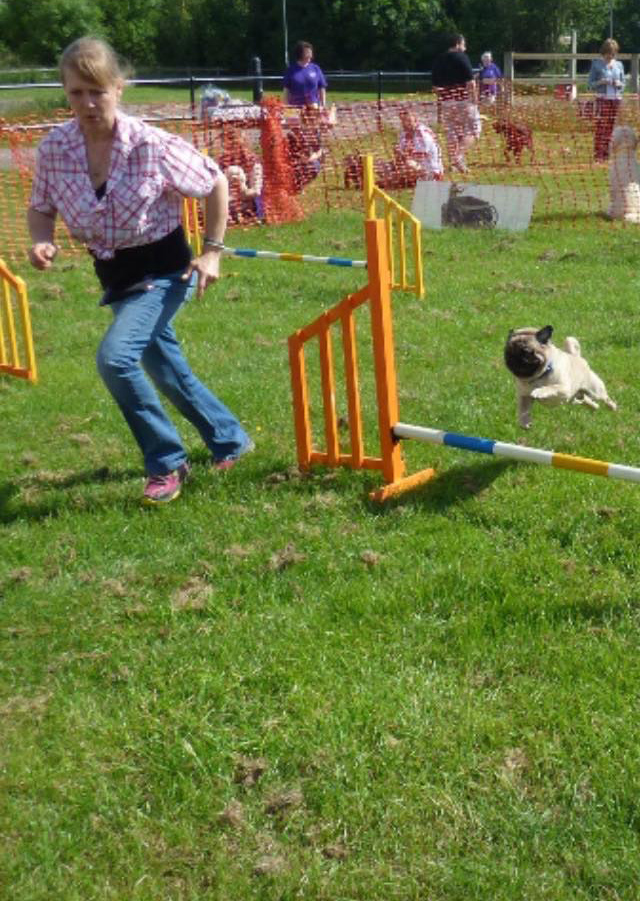 Caroline in action with one of her Pugs.

Caroline and George Craven, from Whitley Bay, Tyne & Wear, own nine Pugs and run Pugility Agility Club; they have been involved in agility with their Pugs for many years. After their first experience at a Pugs In the Park party, the woman who had organised the have-a-go agility contacted George and invited them to train at her club, Pugility, as she was impressed with Mable, their three-year-old Pug.

Caroline and George took to agility so much that they now run Pugility, and all nine of their Pugs take part in the sport. 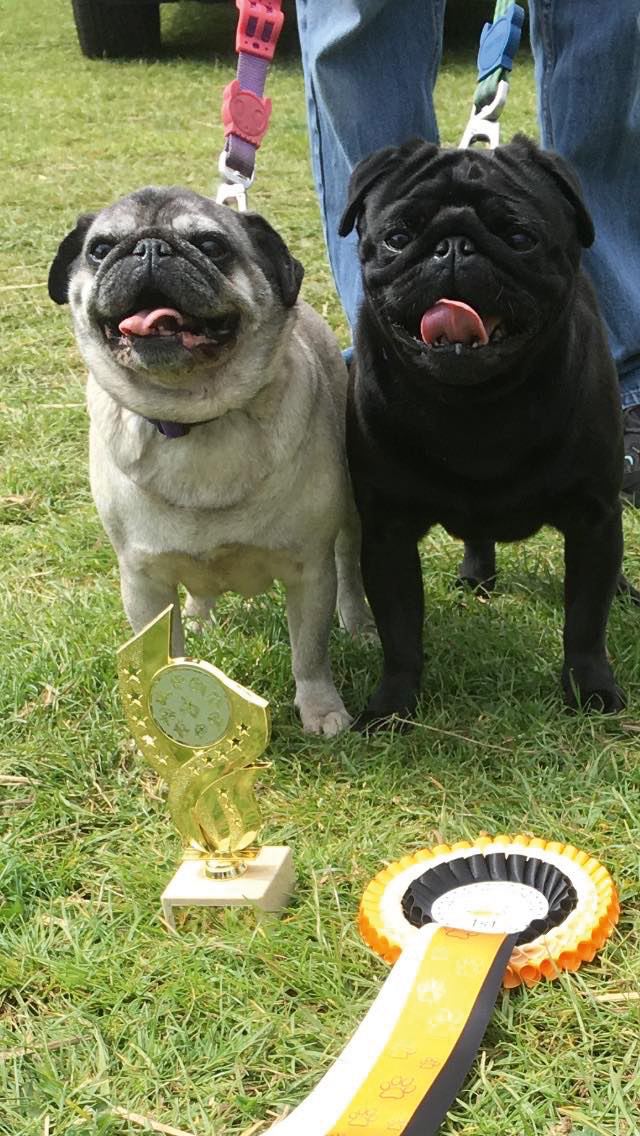 Caroline and George’s Pugs do very well at agility.

George has lots of experience of Pugs. “Like any breed of dog, they differ in ability and willingness. They can all do it, but some have more potential than others. It can take a little more time to train a Pug than another breed of dog; a little more encouragement and perseverance. Pugs give you a lot of love and want to please you. The more exercise and encouragement they’re given, the healthier the dog. Pugs are very capable if the exercise is made fun and they are interested in what they
are doing.”

“She makes me so proud!” 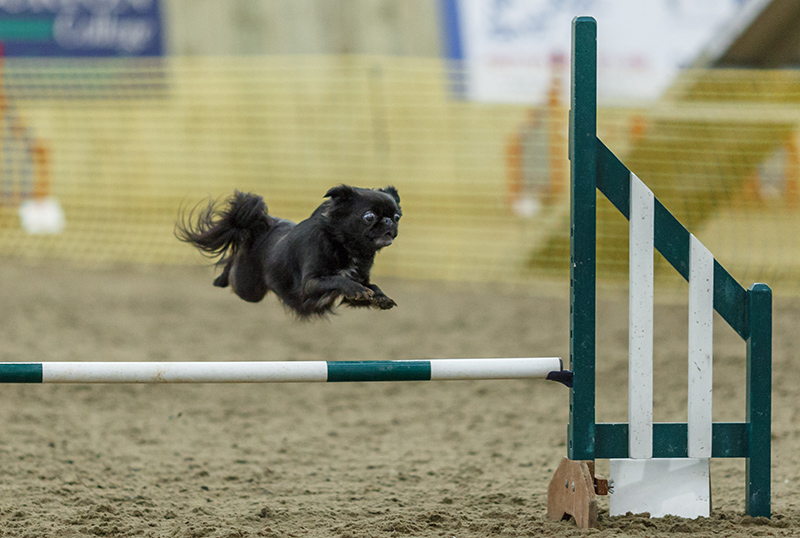 Claire feels lucky to have a dog who enjoys agility so much.

Claire Firth, from Bridlington, East Yorkshire, feels very lucky to have a dog who loves agility, especially when that dog, called Minnie, is a Pug, French Bulldog, and King Charles Spaniel mix.

“She is a mix of three lapdog breeds, but she’s far from being a lapdog!” said Claire. “She makes me so proud. Not only am I getting to enjoy a sport with my dog, but I’m showing people that you don’t have to have a Border Collie. Minnie shows that all breeds can take part in agility as long as the dog is healthy.”

As well as agility, Minnie enjoys long walks in the woods and on the beach. “I’d say Minnie’s quite active, but at home it’s like she knows when to be active and when it’s rest time,” added Claire.

“They are such loyal, fun dogs.” 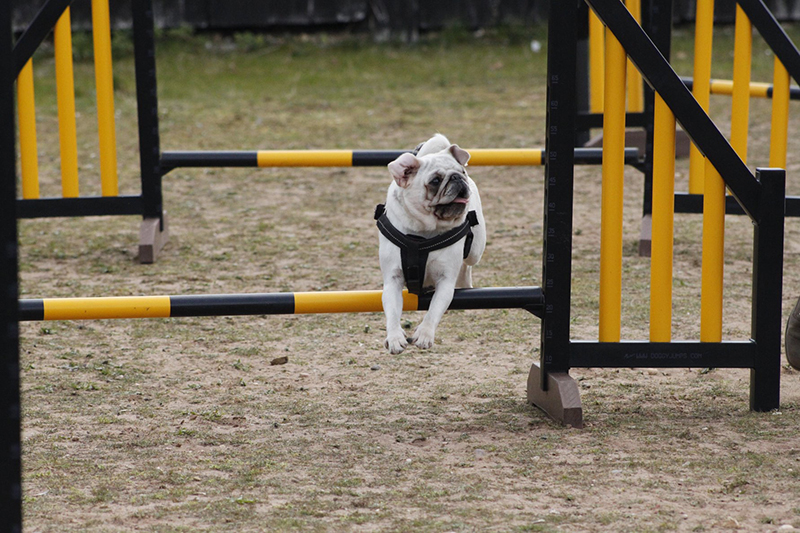 “Sorrel has a lovely nature,” said Suzanne, from Rugby, Warwickshire.

“I initially thought Pugs were difficult to train, but my patience is paying off — and they are such loyal and fun dogs to be with.

“My friend Susannah Chalmers has supported me and given me plenty of encouragement. When I first met Susannah, she instantly thought that Sorrel and Marsha could be related. We looked at their pedigree history, and realised she was right — they share the same great grandfather!”