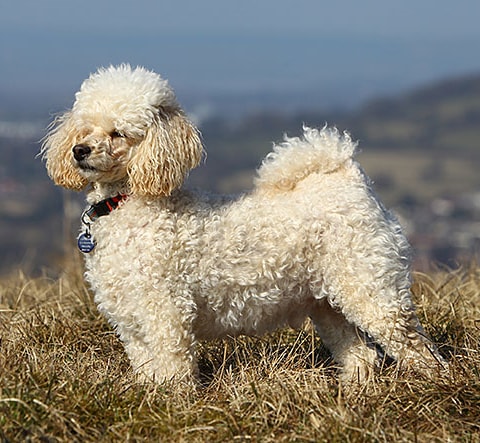 Height Under 38cm, but no less than 28cm

38d21dbf-dd85-4cfd-9b53-055381e159d4
The Miniature Poodle is an incredibly versatile dog. He will love whatever walks you can give him, and will make his own fun where he can. Traditionally the larger Poodles were used as water retrievers, and smaller Poodles to sniff out truffles.

History of the Miniature Poodle

The smaller Poodles have a very similar attitude to their larger cousins, and were developed largely as circus dogs. The intelligence of Standard Poodles was legendary — but they were too big to work in the circus ring, so, a smaller version — the Miniature Poodle — with the same intelligence and trainability was developed.

They immediately became popular, and, by the middle of the 20th century, they were the most popular companion dog of all time.

The Miniature Poodle is predisposed to the following health conditions:

Progressive retinal atrophy (PRA) is a disease of the eye, which causes the retina to degenerate slowly over time - vision slowly declines resulting in blindness. Prcd refers to a type of PRA, which is known in some breeds, including the Miniature Poodle.

Cataracts are a painless clouding or coating of the lens of the eye. They most commonly occur as the dog ages, or as a result of injury to the eye. They appear as a milkiness of the pupil or aperture of the eye and tend to affect both eyes simultaneously. Once they are pronounced, the dog's eye may appear dilated as not enough light passes through the retina.

Epilepsy is a brain disorder, which causes fits.

Patella luxation is a condition where the dog's kneecap slides out of place, causing the leg to lock, with the foot held off the ground. It is common among small breeds and may be congential or caused by a blunt trauma.

Perthes disease is where the blood supply to the femur bone in the hip joint is attacked, causing the bone to die, resulting in abnormal deformity of the ball of the hip joint.

The breed is listed under the Kennel Club/ British Veterinary Association/ International Sheep Dog Society eye scheme. It is also recommended that parent dogs are given a DNA test for prcd-PRA. A breeder should be able to provide documentation proving that this has been done. It is advised that you do not buy from a breeder who can't do this.