764dd1c3-c5c7-4eac-acb0-6eeaef46b66b
Norwegian Elkhounds and their predecessors have provided companionship and assistance to mankind for centuries, guarding flocks and villages as well as chasing down prey for the huntsman.

They are a wonderfully motivated and loyal breed yet still retain a sense of independence that can provide quite a challenge.

Another of the spitz types, the Norwegian Elkhound is one of the oldest of all known breeds, with evidence that these dogs were often buried with their Viking masters. The National Dog of Norway, Norwegian Elkhounds have remained virtually unchanged since their days of hunting elk and bear, and thanks to their stamina and fearless character, they have been used for hunting all over Norway, and also in Sweden. Many still work in these roles today.

Outside of the hunting season, they acted as watchdogs and, as they were outside in all weathers, they developed exceptionally heavy coats and thick woolly undercoats, which can be a challenge to look after in a centrally-heated pet home. 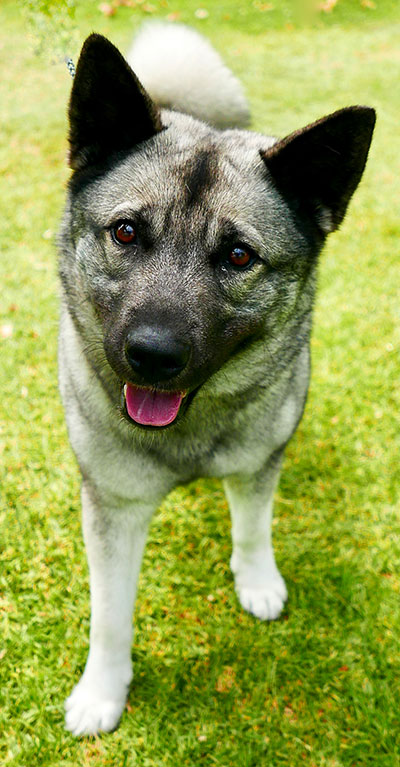 An independent breed who will make an excellent addition to the family providing he is treated with respect and care. Their personality is generally out-going and friendly although they will respond poorly to ill treatment. Training will require patience. Very energetic, they take a lot of grooming and shed a lot! However, the breed is known for its sociability and loyalty to its family, as well as its cooperative nature, which made it such a prized hunting companion.

The Breed Standard specifies and ideal height of 52cm at the shoulder for dogs and of 49cm for bitches. They should weigh somewhere between 20-23kg.

A generally healthy breed with the normal risks of Hip Dysplasia and joint defects in large breeds.

Having been bred for life in Artic conditions, the Elkhound does not enjoy extremely hot temperatures so during warmer periods be sure to offer enough water, shade and cool spaces.

Interesting fact about the Norwegian Elkhound

All spitz breeds have tails that curl over their backs and it has been suggested that this is not only common for most village dogs, but was selectively bred for, so hunters could tell the difference between dogs and wolves (who carry their tails out behind them) even at long distances and in silhouette against a snowy landscape and a bright sky.