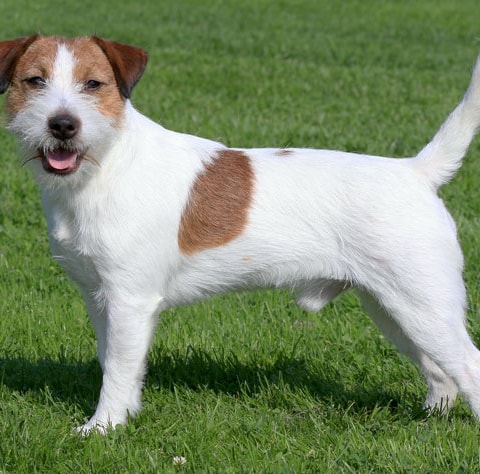 Colours White should be predominant, with black, brown, or tan markings. The Jack Russell Terrier can vary greatly in looks and coat type as the breed does not have a Kennel Club breed standard.

Temperament Hardy, fun-loving, and very affectionate towards his family

de6c355d-6c34-4e3a-a3fd-c75f8df089a8
Jack Russells are lively, busy little dogs and need to be kept occupied, both physically and mentally. Training needs to start early, otherwise the young Jack will get ideas above his station.

History of the Jack Russell

The Jack Russell Terrier took its name from a famous 19th century parson, John (Jack) Russell, whose passion was to hunt the moors of Devon in pursuit of foxes. His ideal dog was a 14in terrier, mostly white in colour to avoid being mistaken for the fox!

Surprisingly, it was only recently that the UK Kennel Club registered the Jack Russell Terrier.

Australia was the first country to recognise the breed, between 1960 and 1980 several dogs were exported from the UK to Australia, and the Jack was developed by enthusiasts into an Australian Kennel Club registered breed, which was recognised in 1991. The rest of the world accepted the Jack Russell Terrier shortly afterwards, apart from the UK, which did not recognise the breed until 2016.

With thanks to Lesley Roberts- secretary of the Jack Russell Terrier Club.

Jacks are generally hardy dogs, but have been known to suffer from:

Atopy is an allergic skin disease in which the dog's immune system overreacts to foreign substances, causing sore, itchy skin.

Luxating patella is caused by abnormal growth of, or natural trauma to, the patella. The groove (which allows the kneecap to slide up and down when the knee bends back and forth) is too shallow. This causes the patella to slide out of the groove sideways, causing the leg to lock with the foot held off the ground.

Perthes disease causes deformity of the ball of the hip joint. The blood supply to the head of the femur bone is attacked and the bone dies, resulting in arthritis or inflammation of the hip joints.

Glaucoma is caused when the eye's natural drainage system becomes clogged, and the eye keeps producing fluid which can't be drained. This causes pressure to build within the eye. It is a painful condition and can result in blindness.

There are no compulsory health tests for the Jack Russell Terrier. However, when looking at puppies, ask yourself: do they look healthy? Are they alert and inquisitive? Are their eyes and ears clean?

Also, ask to see the mother. If in doubt, do not buy. 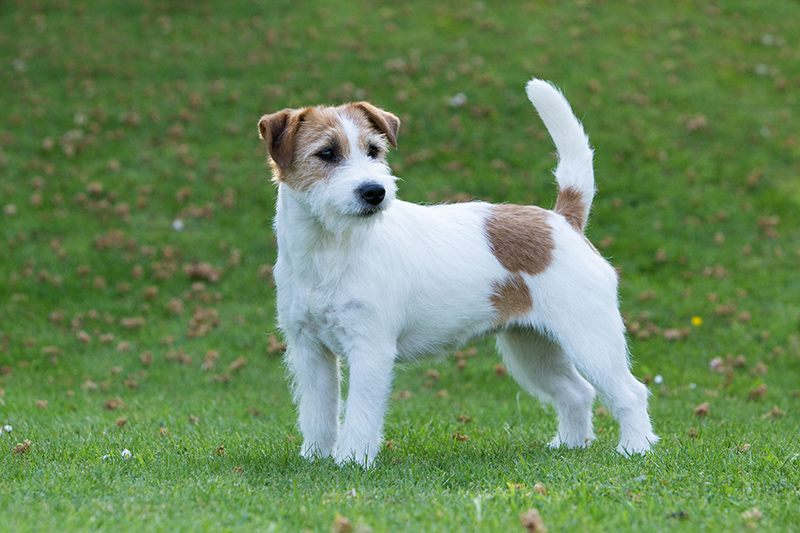 Playful, with a vast amount of energy. They require early socialisation with other dogs and people to become well-rounded members of the family, to whom they are very devoted and loving. Good with children if raised with love and respect. First and foremost, they are working earth terriers used for vermin control. The intensity with which they tackle life is one of their most endearing traits. Highly intelligent, they thrive most in a family with an active lifestyle, where they can explore the great outdoors. The breed is not for everyone, but most Jack Russell Terrier enthusiasts make a lifelong commitment to the breed.

What lifestyle suits a Jack Russell?

How easy is a Jack Russell to train? 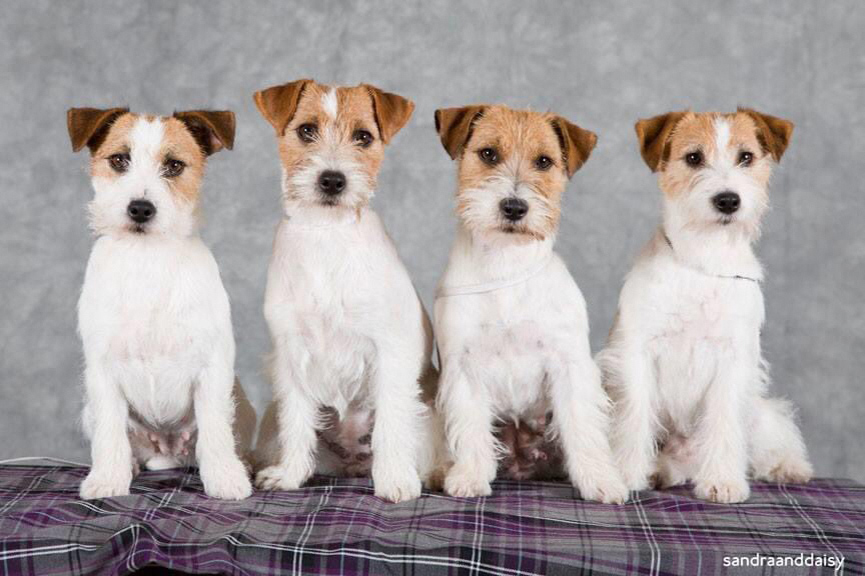 How much do Jack Russell's cost?

- Can be unreliable around small animals.

Q&A with a Jack Russell owner

Why did you pick this breed?
“I didn’t pick the breed, it picked me. My first family dog was Skippy. The breed is so super-smart and intelligent that once you’ve had one you’re smitten for life.” 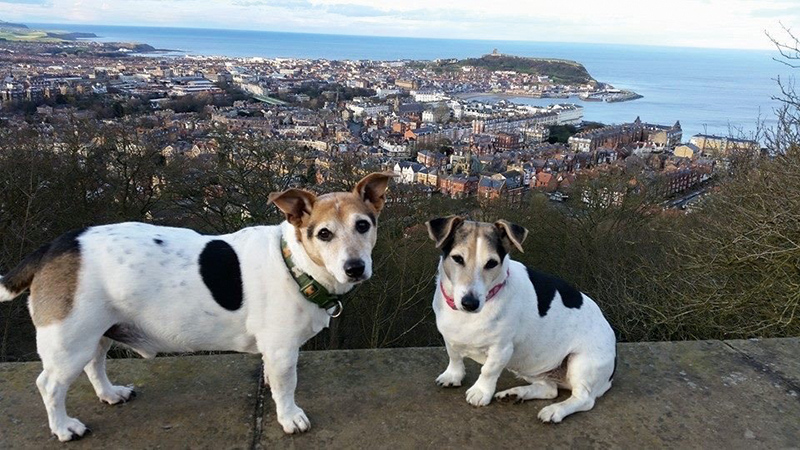 Brother and sister Neo and Trinny.

What have been your biggest challenges with your dog?
“I haven’t really had any challenges with the breed — and I’ve had seven dogs over the years — although they need a confident hand to look after them.”

Has Neo turned out to be what you expected?
“No. I’ve had gutsy, stand-offish little JRTs, but Neo is a super-confident dog. He’s never, ever curled his lip to anything.”

Any ongoing issues?
“No. The JRT is a sturdy little dog, and it’s unusual for them to have health issues.”

Any advice to other potential owners of this breed?
“I absolutely recommend the breed because to me they’re the most rewarding and loving dogs. To have a Jack Russell is to have a best friend.”

How easy is he to care for?
“JRTs need regular baths; these dogs love fox poo and rolling in anything smelly.

“In the main they’re easy to look after, especially the short-haired dogs, although they are moulters — but an outfit is nothing without a few white hairs, and the rewards are second to none!”

How have you found training with your dog?
“Training a JRT is easy as they’re smart, but you have to show who’s boss immediately. These wilful little dogs can be a handful if not kept `

Our social media fans share pictures and stories about their wonderful JRTs. 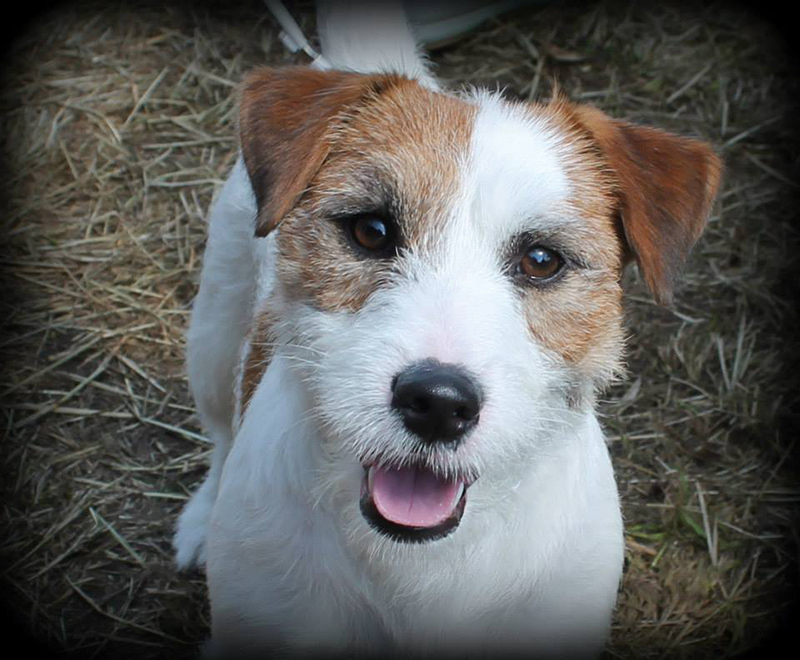 Jeff got his first JRT, Jumbo, seven years ago and is now a convert!

Jeff Springham, Walderslade, Kent.
“We have had Jack Russells for seven years after meeting a Russian exhibitor at the World Dog Show in Budapest  in 2013.

“Luckily, the type of Jack Russell the Australians (and latterly the Europeans and Americans) developed from the original UK dogs has a very even temperament, gets along well with other dogs, both large and small, and is a complete joy to own. I can’t imagine being without a Jack Russell.” 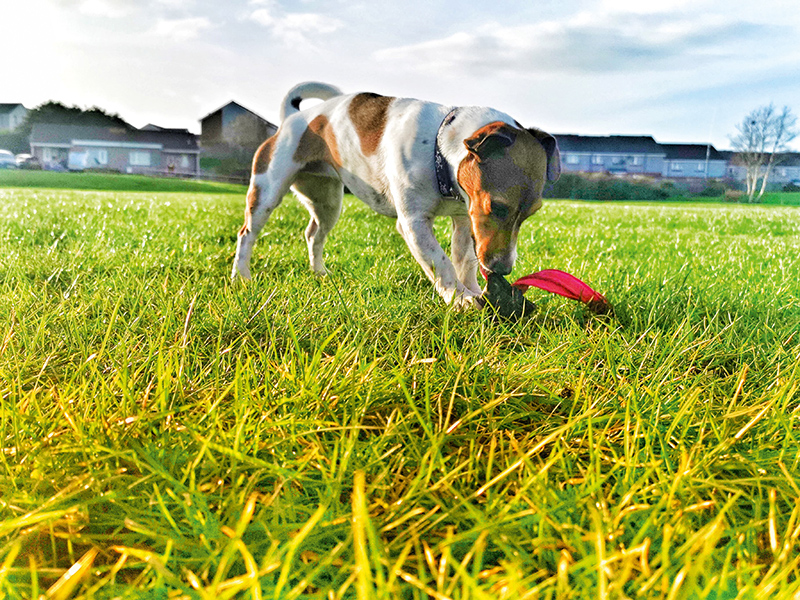 Dawn McCutcheon, Stranraer, Dumfries and Galloway.
“I’m a proud Jack Russell owner. I currently have a two-year-old Jack Russell called Arya. She lives a full life — walking, training, soon to be competing in agility, as well as trick training, and hiking. She is dripping with Jack Russell sass and intelligence, and is the epitome of what I love about — and why I choose to own — this breed.” 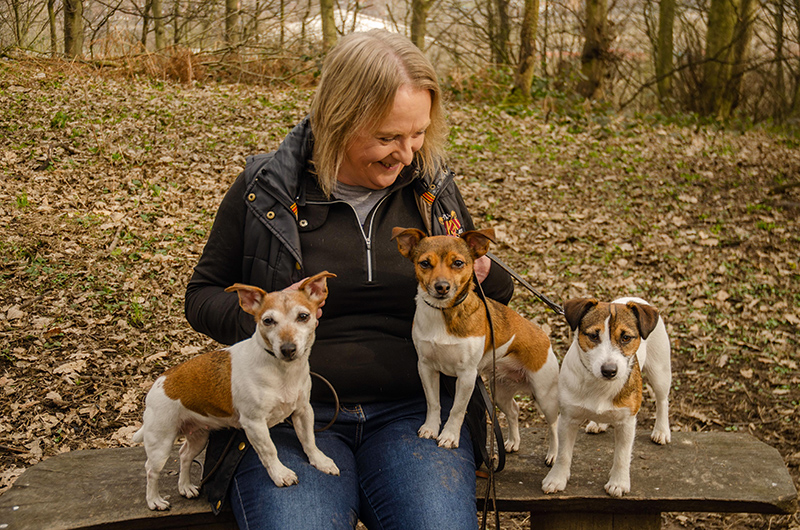 Debra Kay, Chesterfield, Derbyshire.
“Life with Jack Russell Terriers is non-stop; they’re constantly by your side. They’re loving, comical, very intelligent, always up to mischief, and I wouldn’t have it any other way!”

“I find them fantastic to work with; they’re really clever, but you do need to start with them from day one,” said Rachael. “That’s the secret really.” 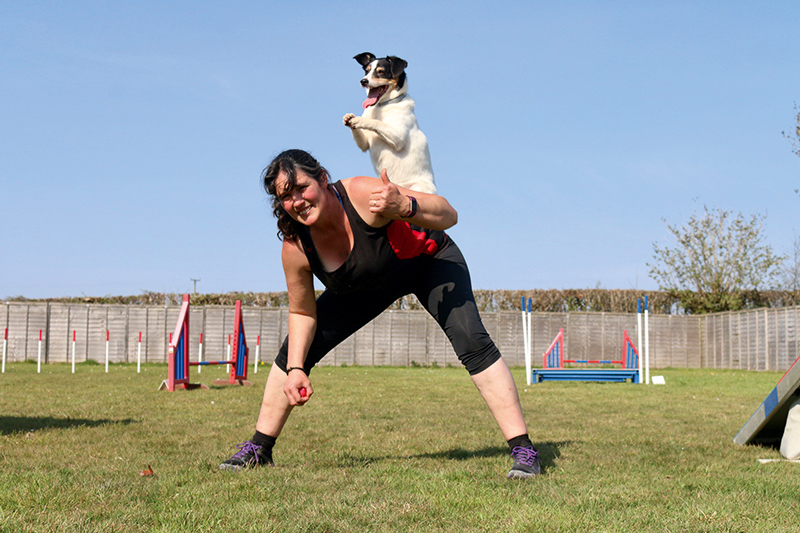 Jack and Rachael hold the Guinness World Record for most paws crossed over in 30 seconds.

Trainer Rachael is well-known for her Jack Russells, and enjoys thrilling audiences at shows and charity events with her demos and displays, but it was a much bigger species that got her into training.

“Originally, I started with my stallion, getting him to do Spanish walk, lie down, and play dead — all sorts of things you train your dog to do. One day, I was picking out his feet ready to train him, and Jessica jumped on my back, then onto the horse’s back. He stood there and looked a bit puzzled but was fine.”

It turned out that the dogs were much easier to train than horses, and now the whole family gets involved.

“My mother-in-law, Patsy, makes the costumes. I tell her what song I’m doing, and give her some ideas for a costume, and she’ll make it all for me. My father-in-law makes all the props.

“From day one, when I got the dogs as puppies, I started training them, and I have built up a fantastic relationship with them. If they’re not taught from day one, they can go down the wrong route and be slightly aggressive, but my dogs are great with people and other dogs. They’re bold, fearless, friendly, and confident little dogs.”