Average lifespan Up to 15 years.

cde69feb-4365-4b77-b1a9-1c4372945006
The Greyhound has sealed its place in our affections with their lithe, handsome good looks, and lovable natures. They are intelligent, gentle, affectionate, and even-tempered.

The majority of Greyhounds are bred for a career in racing, but their working days are short-lived and they can retire from the stadium from as young as two years old.

Once their racing days are over, the Greyhound Trust (formerly the Retired Greyhound Trust) steps in and homes them to new owners, so they can spend the rest of their lives with loving families.

Jo Blake, operations manager of the Greyhound Trust, says: “Some dogs take to retirement straight away and enjoy their quiet life with a family. Others take longer and we have a different routine for them, focusing on getting them used to having one-to-one attention.

“Greyhounds can gain a reputation for being aloof but once they’ve opened up to you, you’ll see how goofy they can be!”

“A characteristic which affects most Greyhounds is their inability to engage their brain before acting! They can be rather clumsy and their spatial awareness is almost non-existent — the phrase, ‘a bull in a china shop’ comes to mind!”

Helen adds that, despite their racing backgrounds, don’t be fooled into thinking that Greyhounds need hours of exercise a day — their favourite pastime is actually sleeping! She says:

“Greyhounds are known for their speed, but not necessarily sustaining such speed for long. Consequently, a Greyhound will be quite happy to enjoy a relatively short walk to release a burst of energy before relaxing on the sofa.” 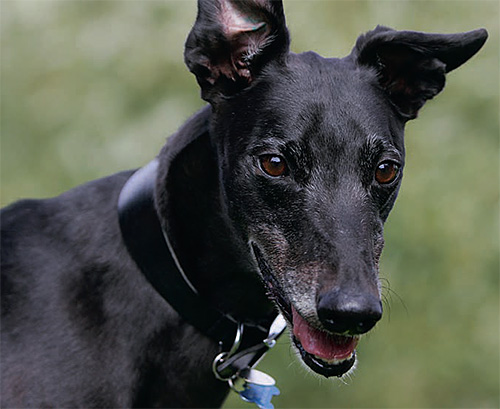 History of the Greyhound

In Egypt, Greyhounds were so revered that the birth of one was second in importance only to the birth of a son. The entire family would mourn a Greyhound’s death and upper-class hounds were mummified and buried with their owners.

One popular belief is that the breed’s name came from the term ‘gazehound’, which actually means ‘sight hound’, as opposed to a reference to colouring.

In the Middle Ages, nobles became so enamoured by their hunting dogs that a new law was passed to make it a capital offence to kill a Greyhound. Commoners were even banned from owning them.

The breed can be seen featured in many portraits from across the ages. As time went on and hunting became a less lucrative pastime, Greyhounds were instead introduced to the dog tracks for racing, where they still work to this day.

Greyhounds may suffer from episodes of bloat (or gastric dilatation and volvulus), a serious condition which affects the stomach, particularly of larger, deep-chested dog breeds. It can be triggered by stress and diet. The breed is also known to suffer from Greyhound neuropathy (GN).

This genetic muscle-wasting disease is caused by a recessive gene. Responsible Greyhound breeders have been testing their dogs to ensure that they are clear of the gene, and that carriers are not bred together.

The ideal home for a Greyhound

A career at the stadium means that Greyhounds are used to being handled and will slot quite nicely into families. Jo says: “There’s a Greyhound out there to suit any home or lifestyle.

They’re so adaptable and after their regimented lifestyles as racing hounds, they get used to relaxing so quickly. They become your right-hand hound!” A secure garden is preferable, and easy access to good walking areas is very important.

Helen adds: “Greyhounds are a beautiful breed and make superb companions, especially for those who would prefer a dog who does not require excessive exercise. Their food bills are not low though, and with their clumsiness, the vet’s bills can sometimes be high too. With a Greyhound, you welcome a large personality into your home, in every sense of the word.”

Jo also suggests that Greyhounds have a little wardrobe of warm jumpers and coats to keep them snug, as they have thin skin and fur. “In the colder months, if you need a coat, they probably will too.”

Grooming requirements: A weekly brush is all that’s needed.

Can they be left alone? Not for long periods.

Good with other dogs? Yes.

Good with other pets? Yes, if well trained.

Average price: Around £800 from a breeder. Prices to adopt may vary.

Exercise requirements: Up to an hour per day.