Colours Black, ash, and iron grey with brown, light brown, or yellow markings. Black is the most common coat colour. There are white GSDs, but this coat colour isn't accepted in the show ring

Temperament Intelligent and loyal, devoted to his owner

The History of the German Shepherd

The German Shepherd Dog (GSD) is one of the most recognisable dog breeds in the world, and the roles these dogs take on are varied and complex — from being a much-loved pet to catching criminals.

The GSD was developed in Germany at the end of the 1800s, by cavalry captain Max von Stephanitz. Originally bred as herding dogs, their job was to guard and maintain large flocks in unfenced areas.

Stephanitz, together with other breed enthusiasts, further developed and promoted the GSD as a working dog, standardising the breed countrywide. In 1899, he founded the Verein für Deutsche Schäferhunde (SV) with his friend Artur Meyer, and established a register that determined a dog’s suitability for breeding based on their physical and mental characteristics. Under Stephanitz’s guidance, the SV became the single largest breed club in the world, and it was his idea to introduce the breed to other types of work such as delivering messages, rescue work, and as personal guard dogs.

During the First World War, the Germans used German Shepherds as messenger dogs and to locate the wounded. Allied soldiers admired the dogs’ intelligence and courage and brought many of them home after the war, establishing the breed in other countries. The name German Shepherd was changed to Alsatian during the First World War and subsequently changed back in the mid 1970s.

The GSD has been changed drastically over the years by breeders, but they remain extremely popular dogs because of their personalities. Among their positive qualities are intelligence and protectiveness, and they are great family companions, although they need firm training as puppies.

The breed has evolved into three types: Germanic, English, and working. The Germanic types are flashy, high-drive, high-energy Shepherds, who you’ll often see running about barking at things. They are quite long-bodied. There are some terrible exaggerations in the show ring, with cow hocks and roach backs, but there are some very nice, healthy ones around as well.

The English types tend to be a bit shorter in the back, and a bit more upright at the front; a squarer looking dog. They’re a lot more placid, easier going, and lower drive than the Germanics. Because of criticism of the over exaggeration in the Germanic type, there are some healthier, squarer ones being bred, and some people have been breeding the English and Germanic types together to produce a more middle of the road dog.

Generally speaking, the working types are bred as a very specific type of dog and retain certain characteristics appropriate to the job they will be required to do.

With thanks to Debbie Connolly- founder of Bravo Working Dog Rescue

Do German Shepherd have health concerns?

Generally a healthy breed but German Shepherds are prone to the following conditions:

Hip dysplasia, elbow dysplasia, and OCD are all conditions that affect the hip, elbow, and shoulder joints; retinal atrophy is a genetic disease that affects the retina of the eye and results in blindness; CDRM affects the use of the hind legs - affected dogs will criss-cross their legs and might trip themselves up when running, and will gradually lose the use of their hind legs completely - and the cause is unknown; haemophilia is a deficiency in blood clotting and affected dogs will have a tendency to suffer from uncontrollable bleeding following even the slightest trauma. It's a gender-linked inherited disease with males being most commonly affected.

It's absolutely essential that the parent dogs of any puppies you view have had the relevant health checks. In the case of the GSD, they must have been hip scored, elbow scored, eye tested, and male dogs tested for haemophilia. A breeder should have documentation to prove these tests have been carried out; make sure you see it.

Remember: when doing research into buying your puppy it's important to see the parent dogs and ensure that they have no physical exaggeration from the breed standard.

The left and right hips are X-rayed and scored individually; the fi nal hip score is the two individual scores added together. The lower the score, the better.

The average hip score in GSDs is 18; anything higher is considered poor and the dog shouldn't be bred from.

Each elbow is X-rayed and scored between zero and three; zero being excellent and three indicating the most severe problems. Only dogs with a zero score should be bred from. 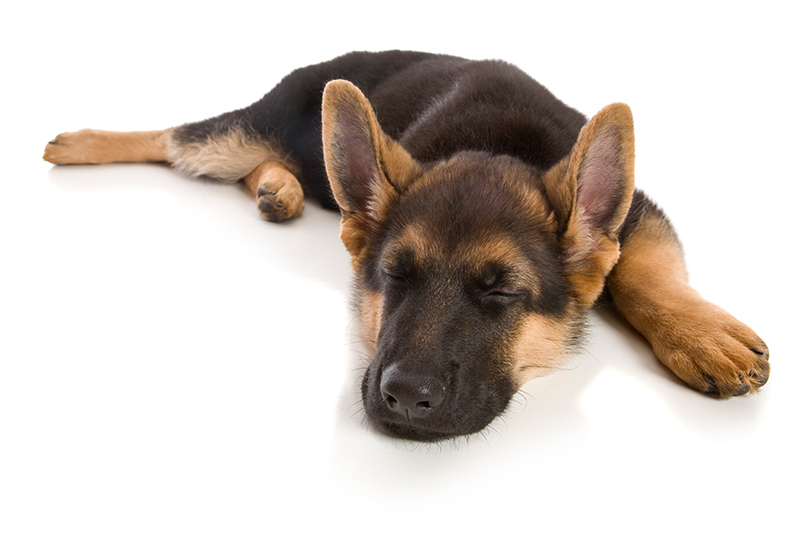 What lifestyle suits a German Shepherd? 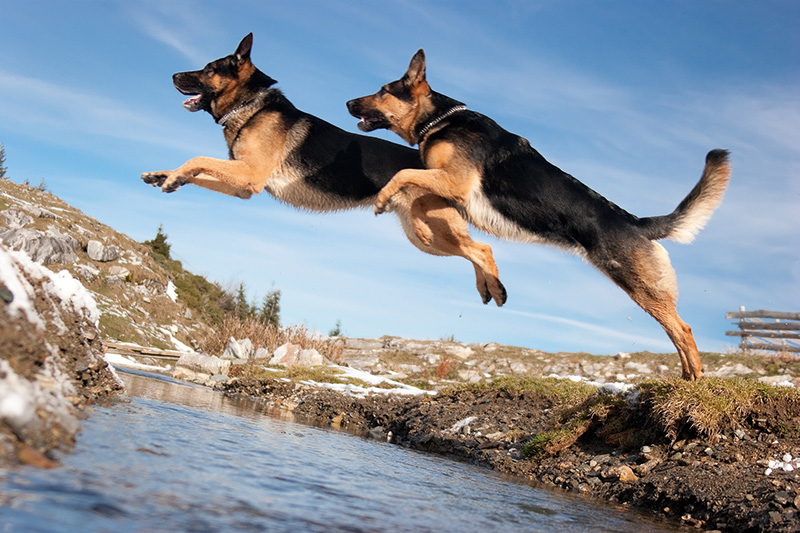 How easy are German Shepherds to train?

How easy is it to look after their coat?

How much do German Shepherds cost?

- Prone to some hereditary health problems.

- Requires a lot of exercise, both mental and physical.

Q&A with a German Shephard owner

Tell us about your dog.
“Lily is an 18-month-old sable German Shepherd. She currently weighs around 41kg so she’s a big girl. She’s a real lapdog and does not realise how big she is. She loves her food — especially cheese — and water of any sort; muddy puddles are her favourite.

“She also loves a good conversation. She doesn’t bark (something she does rarely), but will literally ‘talk’ back to you when you speak to her. I probably sound quite mad, but it’s a cross between a whine and a grumble — that’s the only way I can describe it — it’s very funny and I’m sure lots of other GSD owners will know exactly what I mean.” 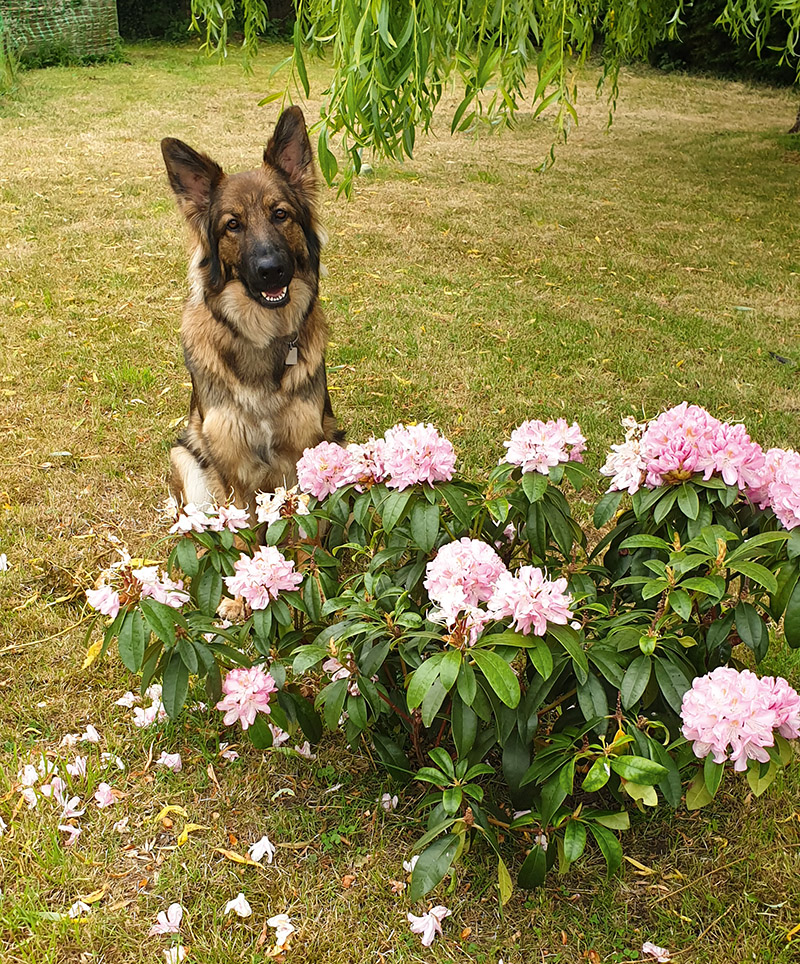 Lily loves a game of ball in the garden.

Why did you pick this breed?
“A German Shepherd was my husband’s choice. He grew up with them, and I grew up with terriers, but any time we discussed getting a dog he would say: ‘You can’t ‘hug’  a little dog.’ When we got our first Shepherd, I understood what he meant.”

What have been your biggest challenges with your dog?
“With Lily, definitely her size — she’s a big girl and very strong, so training has been key.”

Has your dog turned out to be as you expected?
“My first GSD was very nervous, but from day one I realised Lily was a whole different being: confident, fearless, and in love with everyone and everything, especially dogs. And that’s how she has stayed.”

Any ongoing issues?
“Not really, her training took a bit of a hit with lockdown but when classes resume she will get to meet up with her doggy mates again. She adores other dogs and wants to play with every one she sees
— she’s still learning that not every dog likes a big furball bouncing around trying to get them to play. It’s something that we are working on and she’s slowly improving.”

Any advice to other potential owners of this breed?
“Do your research. Speak to other German Shepherd owners, and try to meet their dogs. Remember that each dog is different, and socialisation is a very important factor with Shepherds. And get used to sharing your bed and sofa with a big furry lump!”

How easy is she to care for?
“Shepherds do like to spread their fur around so making sure she gets brushed regularly is a definite must. Other than that she’s pretty easy going, and is happiest lying on the sofa having cuddles with her dad.”

How have you found training your dog?
“She is very clever and picks things up quickly. We are lucky in that we have found a trainer with an expansive knowledge and understanding of the breed.”

What activity do you and your dog most like to share?
“Lily loves to play ball; she will pick up the ball and literally throw it at your feet waiting for you to pick it up and throw it for her. She runs around the garden at 100mph.”