6ab68442-552a-4c06-ae28-0d7c8325fe9d
Boston Terriers thrive on human company and want to spend most of their time with their families. This is an active dog who will go for long walks but will be equally happy sitting with you at home.

The Boston Terrier is generally a healthy and hardy breed but the following conditions are known:

Cataracts are a clouding of the lens of the eye which, if left untreated, can cause blindness. Boston Terriers are susceptible to two forms of cataracts: early onset and late onset. Early onset cataracts are caused by a mutant gene in the breed. They can be diagnosed in puppies aged between eight and 12 weeks and develop between the ages of two and four. Late onset cataracts are not caused by the mutant gene and usually occur later, between the ages of three and eight.

Kennel Club assured breeders of Boston Terriers must use the British Veterinary Association/Kennel Club/International Sheepdog Society eye scheme. The test detects eye problems, in particular the onset of hereditary cataracts. It is recommended that dogs are tested once a year.

The DNA test HC-HSF4 is compulsory for KC assured breeders, to test for the mutant gene HSF4 which causes early onset hereditary cataracts. As the gene is recessive, a Boston Terrier might have one copy of the gene, meaning they aren't affected. However, they will carry the gene which could be passed on to any offspring. The test will determine if a dog is affected, a carrier, or clear. 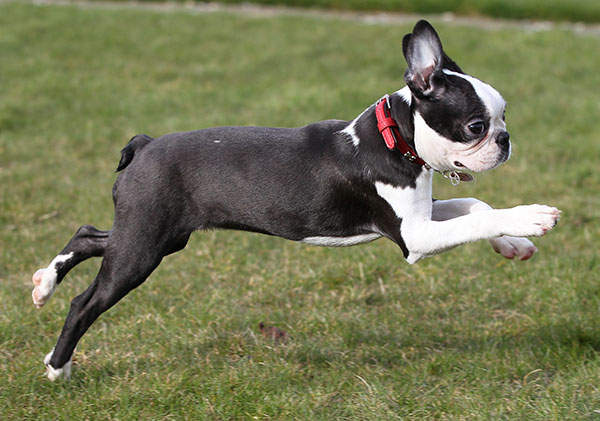 While the breed can’t be relied upon for its abilities to work as a psychic, the most successful and unexplained dog clairvoyant was a Boston Terrier called Missie, from Denver, in the United States.

According to Bill D. Schul, in his book ‘The Psychic Power of Animals’, Missie stunned her owner and experts alike by predicting the results of sporting events, the next US president, the sex and weight of babies, and even the date and time of her own death.