Colours Jet black, with rich red markings on cheeks, over eyes, on all four legs, and on chest. White markings, in a cross shape on the chest and a symmetrical marking on the head

ac5eff16-3033-4b6e-b763-a9c692886d74
The Bernese Mountain dog is a devoted family dog who is excellent with children. The origin of the breed can be traced to the Romans' invasion of Switzerland, where army guard dogs mated with local flock guarders.

● Coat care: A handsome Bernese in full coat is a striking sight, and some regular grooming is required to maintain this. If not given any attention, the coat will develop knots, especially behind the ears and in the longer hair on the backs of the legs.

● Health: Hips and elbows have generally improved over the years, but problems still appear now and again, usually if standards are relaxed. If problematic, elbows, particularly, can need careful management during the skeletal growth period.

Degenerative myelopathy is known, but is not a big problem, and can be avoided by the testing of parents (two tests for each dog).

Around two thirds of BMDs die of cancer, including about 25 per cent from an aggressive histiocytic sarcoma, which is known to have an hereditary element. In recent years, a world-leading, predictive test to help reduce the incidence of this has become available to breeders.

● Character: These friendly, confident, loyal family dogs are happiest when they are with their family. They are excellent with children, and generally friendly with other dogs and animals.

Proper training and socialisation are essential while young; this is a large, powerful dog who needs correct training, otherwise, like any other breed, he can become unruly. However, problems are relatively rare, and good breeders will give advice in this area.

● Trainability: Originally working dogs, BMDs are usually keen to please their owners so easy to train with food incentives. They can tackle most things, and with good training do quite well, but they’ll never consistently challenge the top obedience breeds. Most are natural carters and quickly adapt to draught work, pulling their carts around a course, or with their handler in Swiss traditional dress, the cart, decorated with flowers, reflecting their heritage.

● Exercise requirements: Fairly flexible, but they were designed for steady rather than prolonged energetic work, and are too heavy in bone for extremely mobile activity. Sensible care must be taken with
fast-growing, developing puppies up to about 15 months. Good breeders will ensure this is stressed to inexperienced owners.

● With thanks to Stephen Green, breed health coordinator of the Bernese Mountain Dog Club of Great Britain for his help with this feature. 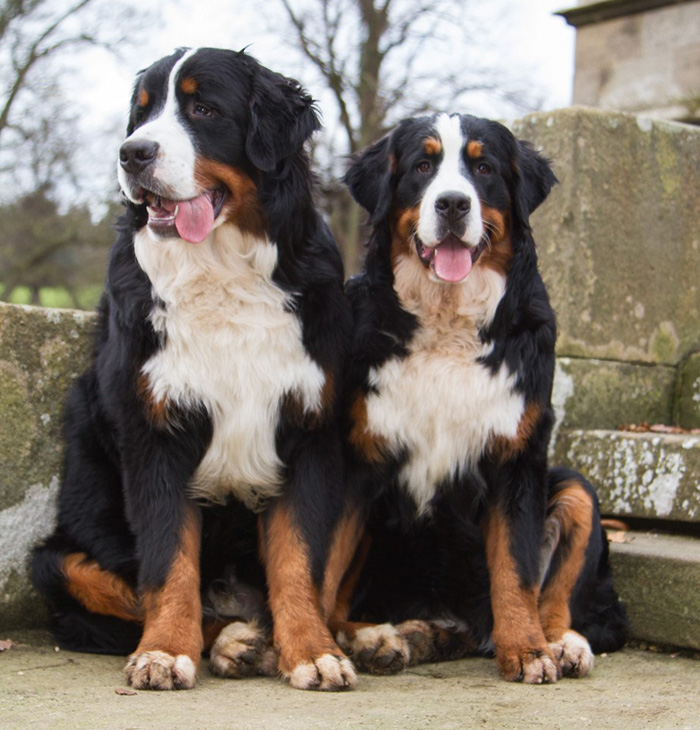 Big and beautiful — the Bernese.

These gentle, fun-loving dogs thrive on being at the centre of the family, as Julie Hill discovers.

The Bernese Mountain Dog (BMD) takes its name from the beautiful Bernese Oberland region in Switzerland, from which it originated.

The BMD is thought to be a descendent of the large molosser-type dogs brought into the country by the invading Romans, 2,000 years ago, who, over the centuries, mixed with the local farm dogs.

The breed began to develop in the early 20th century, but these dogs were primarily large, not giant.

They were used for draught work, taking farm produce such as cheese, basket work, and handmade tools to market, or delivering milk to the village dairies.

These dogs were also general farm dogs, performing guarding duties and assisting with the droving of cattle into the alpine pastures in the summer, and bringing them back in the autumn.

Bernese were intensely loyal, family dogs, who became part of the fabric of life in the alpine countryside, taking part in village ceremonies and parades, when their working carts were decorated with flowers, and they were accompanied by handlers in national costume. Colourful recreations of this can be seen around the UK at country fayres as well as at breed club events.

The Bernese has become a popular breed across the globe in the last century. 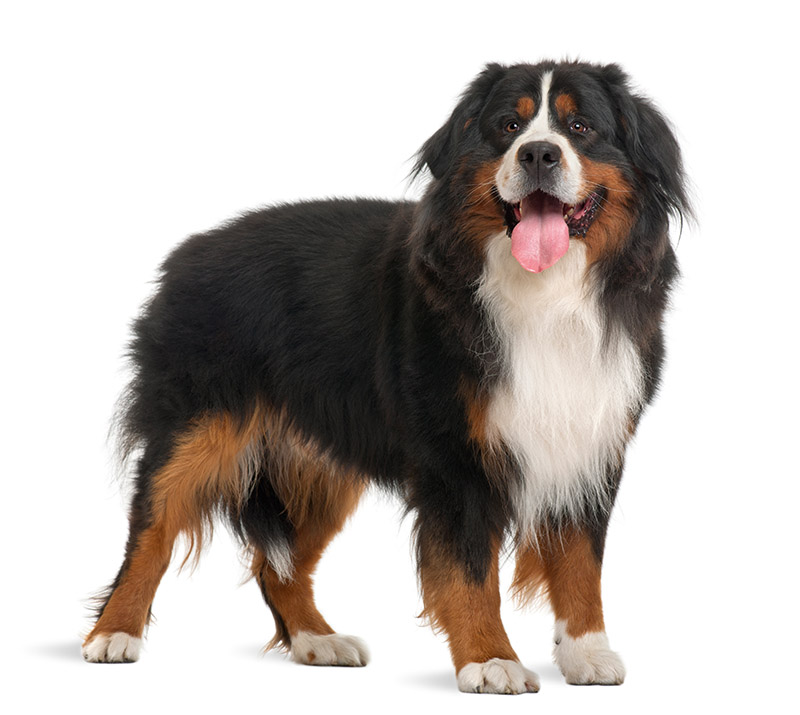 Tell us about your dogs.
“We’ve got two: Chelsey who’s eight years old, and Fiz who is four. They’re both fairly typical of the breed, of which we’ve had 16 over a period of 30 years!”

Why did you pick this breed?
“I just loved the personality; they’re loyal, beautiful, friendly dogs.”

Where did your dogs come from?
“Both were bred by reputable breeders, who are known and active in the breed.”

What have been your biggest challenges with your dogs?
“They’re a very clever breed, but they can be a bit stubborn. They use it to their advantage. It’s like that cartoon where the older dog says to the younger dog: ‘Don’t act clever too quick — play a bit dumb, or they start taking the treats away!’”

What have been your happiest times together?
“When we’re out and about doing our various activities — a lovely walk on the beach or in the woods. I think if you asked them that question, they’d say the same.” 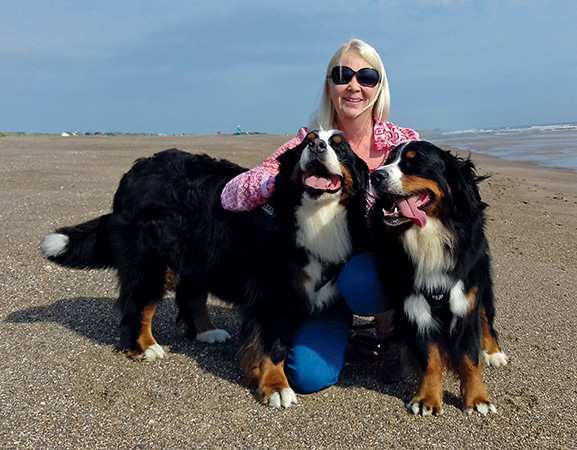 Sandra with Chelsey and Fiz on the beach.

Have your dogs turned out to be what you expected?
“Both my girls have exceeded all my expectations in their temperament, willingness to learn, just how happy they are, and the love they give.”

Any ongoing issues?
“Not for me, but with a BMD one issue is keeping them fit for the activities they’re actually doing, and keeping them at the correct weight, because they love their food! Also, you have to be aware of heat, so you need cool coats, and to carry water with you at all times; walk them when it’s cool.”

Any advice to other potential owners of this breed?
“Be prepared to wait to get one – if you’re able to get one quickly, question that. They’re time consuming; they love to be with you. They’re not a dog who would do at all well being kennelled; they need to be in the home and part of the family. You can’t be too proud of your garden because you will find big holes — they love to dig and ‘help’ with the gardening.”

Sum up your dogs in one sentence.
“Smiley, happy, loving.”

How easy are they to care for?
“As a puppy you have to take a great deal of care with them because they grow extremely rapidly. They need time for their bone structure to catch up, so you need to avoid things like stairs and very strenuous exercise. They grow up quickly in body, but not in brain!

“Also, grooming – there’s an awful lot of coat. They need to be groomed from a puppy so they get used to it. And you need a good vacuum!”

Would you have another dog of this breed?
“Always and forever.”

How have you found training your dogs?
“They love to learn — even the older dogs. They’ll do anything for a treat or for interactive play. One thing you can’t teach a Bernese is not to get on the sofa!” 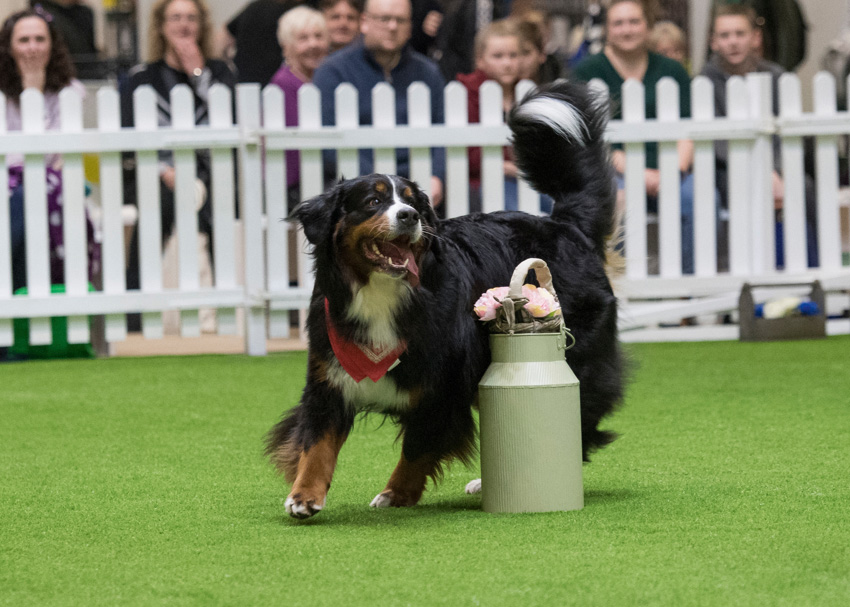 Fiz doing heelwork to music at the 2020 Caravan Show.

What activity do you and your dogs most like to share?
“They both absolutely love carting. I do heelwork to music with Fiz and she came in the top 20 dogs last year, to qualify for the semi-finals at Crufts. They both do a bit of agility and obedience, for fun and fitness.”

Here are some comments and images of your brilliant Bernese, shared by our social media followers. 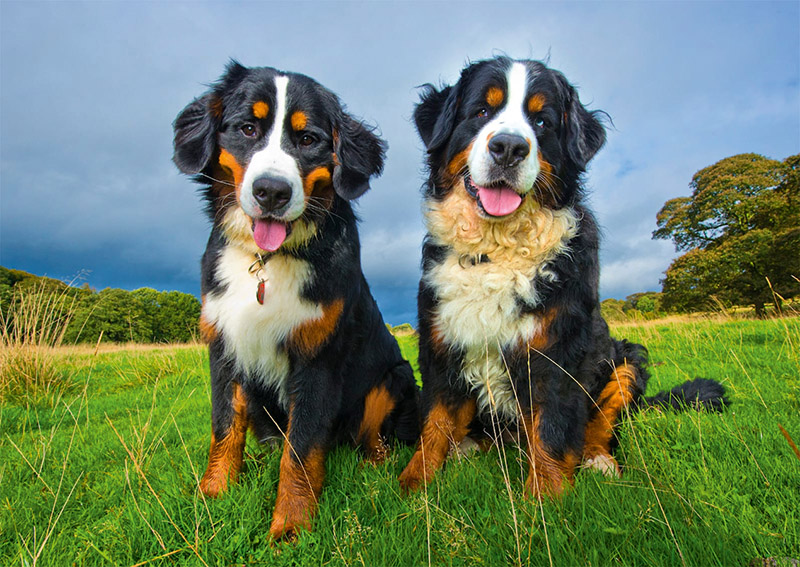 Tracy Roman, Hythe, Kent.
“Sylvie and Daisy are the most wonderful companions. Daisy was five in June; the years have flown by, and life’s never been the same since she arrived. She’s such a presence in the house and follows me everywhere. Fifteen months ago we were lucky enough to be accepted for another puppy and Sylvie joined us. She has been the most wonderful, easy puppy. She and Daisy are firm friends. If anyone is thinking of welcoming a Bernese into their lives they certainly won’t regret it. Their lives will be full of hair, drool, goofiness, and no more solo trips to the bathroom!” 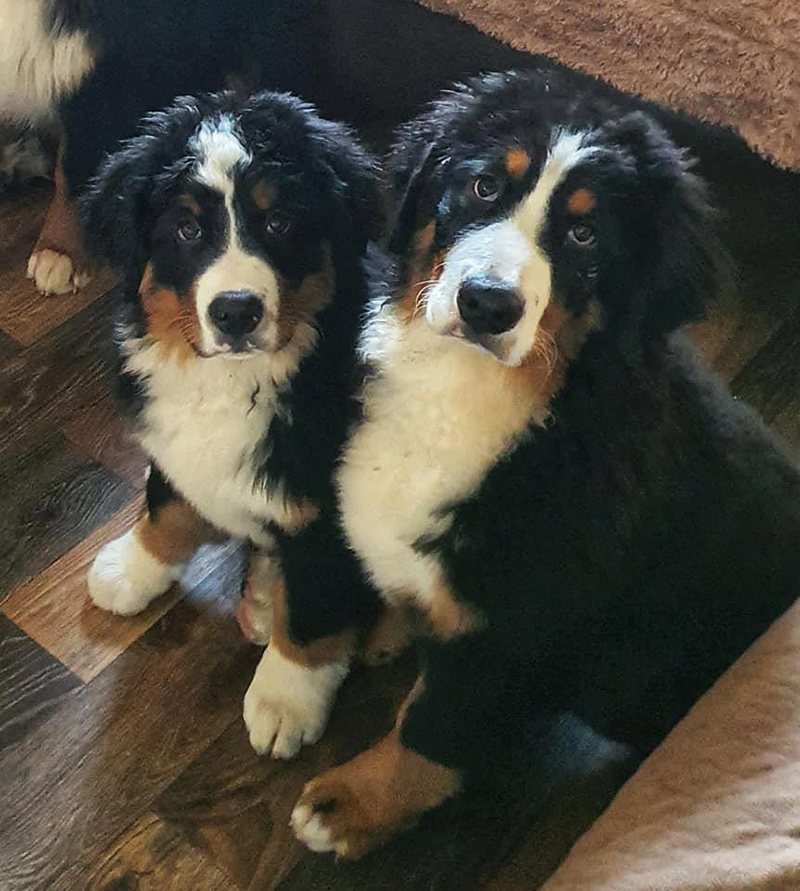 Margaret Hall, Alloa, Clackmannanshire.
“Bella, Rosie, and Hugo love going for early morning walks, followed by a nice long snooze (snoring included!). Berners are sweet, laid-back, gentle giants, and a real pleasure to own. They love kisses and cuddles, with each other and especially with (human) Mum and Dad. They also enjoy having their teeth brushed, and keeping big brother Toby, a German Shepherd X Husky, on his toes.

“I longed for a BMD for over 20 years and can honestly say I’ve not been disappointed. They’ve fitted into our lives, hearts, and home effortlessly.”