f224d37e-e16d-466e-b7fd-14d67f5b7ed6
Known as the "King of Terriers", the Airedale is largest terrier breed and blessed with a majestic moustache. Renowned for their courage and alertness as well as their loyalty.

The Airedale can exhibit dominant behaviour toward other dogs and is generally fearless. Smart and intelligent, Airedales possess a great sense of humour although they can be quite tiresome due to their limitless energy! They can be very helpful and have a great reputation with search and rescue teams. Airedale Terriers thrive on human company and would not enjoy being left alone all day, they are devoted to their families and are particularly good with children. Airedales are an intelligent breed and require mental as well as physical stimulation.

The largest of the terriers, the Airedale is still a medium sized breed. Its height should be between 56-59cm for bitches and 58-61cm for dogs, with a weight of around 23-29kg for both.

The Airedale Terrier is an energetic dog who needs at least one good walk a day and is always ready to play. Airedales can be quite stubborn - if they don't want to do something they won't, they respond best if training is fun and if they are rewarded with lots of praise and love.

The Airedale Terrier is generally a healthy and hardy breed. However, the following condition is known:

Hip Dysplasia is the malformation of the hip which can affect the stability of the joint. Health Tests: Kennel Club registered breeders of Airedale Terriers must use the British Veterinary Association/Kennel Club hip dysplasia scheme. The average hip score in the Airedale Terrier is 16 (each hip is scored individually and the two figures added together to give the dog's final hip score). Breeders are strongly encouraged to only breed from dogs with scores well below this figure. It is also recommended, but not compulsory, that bitched under two and over the age of six should not produce a litter. 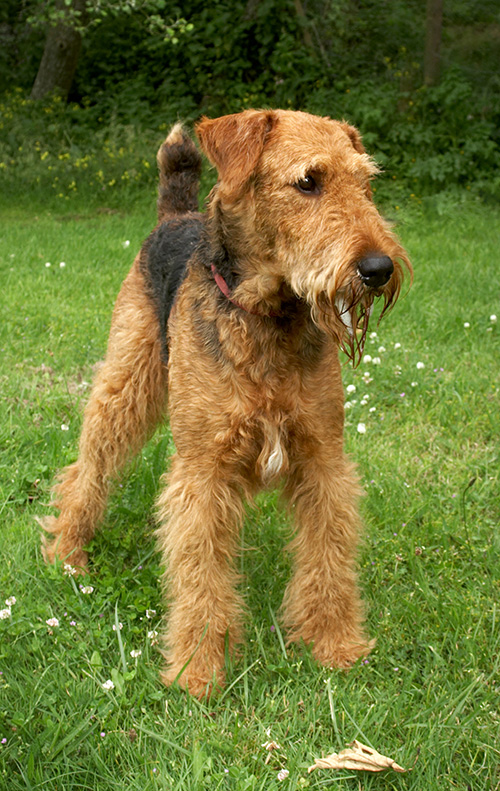 Unless you are able to keep them active on a daily basis you should be careful not to over-feed. Be careful with exercising them too much in the first year as this can cause muscular and joint issues but generally they're a hardy and tough dog.

As long as he has enough exercise he will be happy living in the town or countryside. A fenced garden for him to play in and burn off some energy is advisable.

The Airedale has a double coat which needs brushing most days to maintain its look. It will also need hand-stripping two or three times a year so it is a good idea to get him used to standing on a table when being groomed.