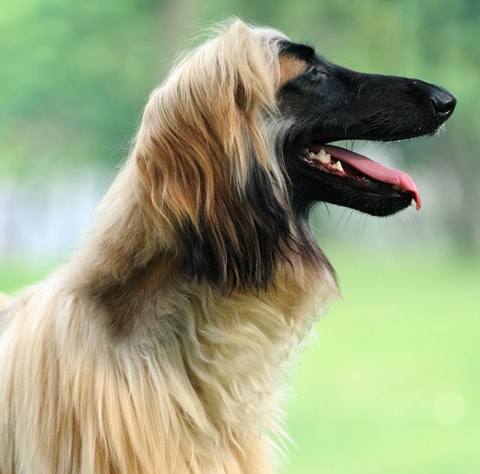 History of the Afghan Hound

A favourite of Afghan royalty and used by the British Army as messenger dogs in India, the breed was introduced to the United Kingdom in the latter part of the 19th Century.

While the Afghan Hound may look like a supermodel in the show ring, he is an ancient sight hound, designed for some serious hunting. His job was to hunt mammals in his native Afghanistan, and these included hares, foxes, deer, gazelle, jackals, wolves, and even leopards! The dogs would run fearlessly and tirelessly ahead of mounted hunters in the pursuit of their prey.

Despite not being as fast as their greyhound cousin, Afghan racing is a sport growing in popularity. The Afghan hunts by sight and will chase anything that moves.

The Afghan Hound's stunning good looks have always been recognised and celebrated, and they were highly prized by the nomads they worked with. Every year they were brought down from the mountains for a special festival, at which they were the guests of honour and were dressed in traditional necklaces and flowers.

In a recent study of the most intelligent dog breeds, the Afghan came at the bottom. This doesn’t necessarily mean that they are stupid however — just that they see no point whatsoever in training, and this is a trait they carry to this day (as owners of these fabulously elegant dogs can testify).

Aloof is a much-used word when describing the Afghan, happily followed closely by affectionate and playful. They make excellent watchdogs and are quick enough to give chase if needs be. They do display a reluctance to come when called although this is as much to do with their sense of independence as abstinence. They are relatively difficult to train although with a good a program they can be effectively taught to an acceptable standard.

Sight-hounds in general have a low tolerance toward anaesthesia and the Afghan is no exception. The primary health concerns are allergies.

As an intelligent and sensitive breed the Afghan needs to be closely supervised during socialization. They should be given time to warm to family members and strangers but with the appropriate care they will integrate easily with the family.