Reuniting lost pets with their owners using the dog detectives One of the best tools for reuniting owners with their lost pets is a dog’s nose, as Julie Hill discovers when she meets some dog detectives.

During his years in the police force, Colin Butcher focused on animal crimes, so when he left the force, he set up a private detective agency. He now runs The UK Pet Detectives, in Guildford, Surrey, specialising in investigating the theft of animals and finding lost pets, including cats. 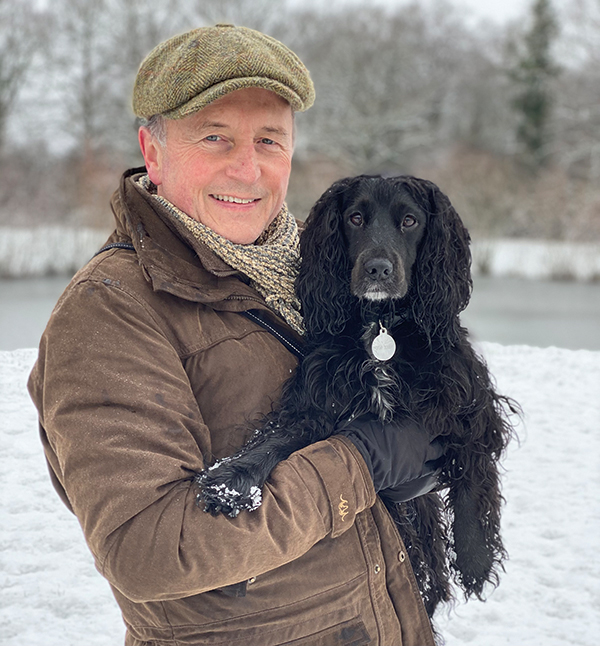 “Being around for thousands of years, cats have reached the point where they’re the perfect ambush predator, which means they’re very, very good at not being seen,” explained Colin.

“I’d worked with drug dogs, and I knew how brilliant they were at finding the tiniest amount of narcotics. I started thinking that we could almost certainly train up a dog to find cats.”

Making that dream a reality — training Cocker Spaniel Molly — took a year and a half, and the help of charity Medical Detection Dogs’ CEO Claire Guest.

“Molly is trained in what’s called source to origin,” explained Colin. “We take the source from the house, and Molly finds the origin of the scent — the cat.

“If a cat’s got locked in a garage, because he’s giving off scent constantly, eventually the garage will be packed full of the cat’s scent. The scent starts to seep out of the window frames and underneath the doors.

“Every cat in the world has a unique scent. When we’re working in a city, say central London, there might be a density of 60 or 70 cats in a small area. Molly can detect the exact cat who’s missing, and ignore all the others.” No wonder that four out of every five searches end successfully!

The drive that makes Molly a marvellous working dog made her a challenging pet. “I’m her fourth home,” Colin revealed. “She was on Gumtree at 10 months old. I researched her history; each time Molly changed hands she’d be getting more unruly, difficult, and destructive. When I got her, she was a hyper, little bit out of control, disobedient food thief. She doesn’t have a disposition that’s about being petted. She enjoys affection, but she absolutely adores working.”

However, Molly need days off. If she searches for more than three days in a row, she can get nose fatigue. The pet detective job is intense for both dog and handler.

“Everyone we work for is a committed cat lover. It’s not unusual to have them collapse in tears after the first hour when we’ve not got their cat back.”

But for Molly, Colin ensures every search ends positively. “When I get the source sample from the owner’s home, I gather enough to split it into four: one is the working sample, which is used throughout the day; two are kept indefinitely; and at the end of every single search, when we haven’t had a success and when Molly’s having a rest, I’ll hide the final sample in the location. Molly will detect it and get the reward,” he said. 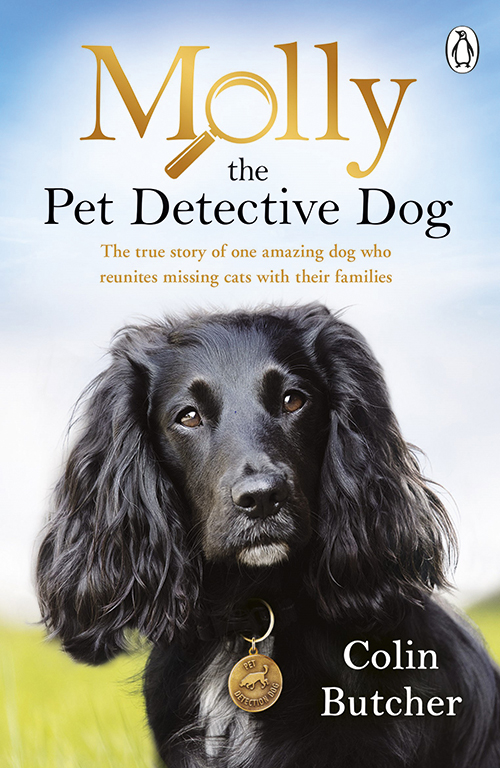 * You can read the full story in ‘Molly the Pet Detective Dog’ by Colin Butcher, available online.

* For more information about The UK Pet Detectives, visit: thepetdetectives.com 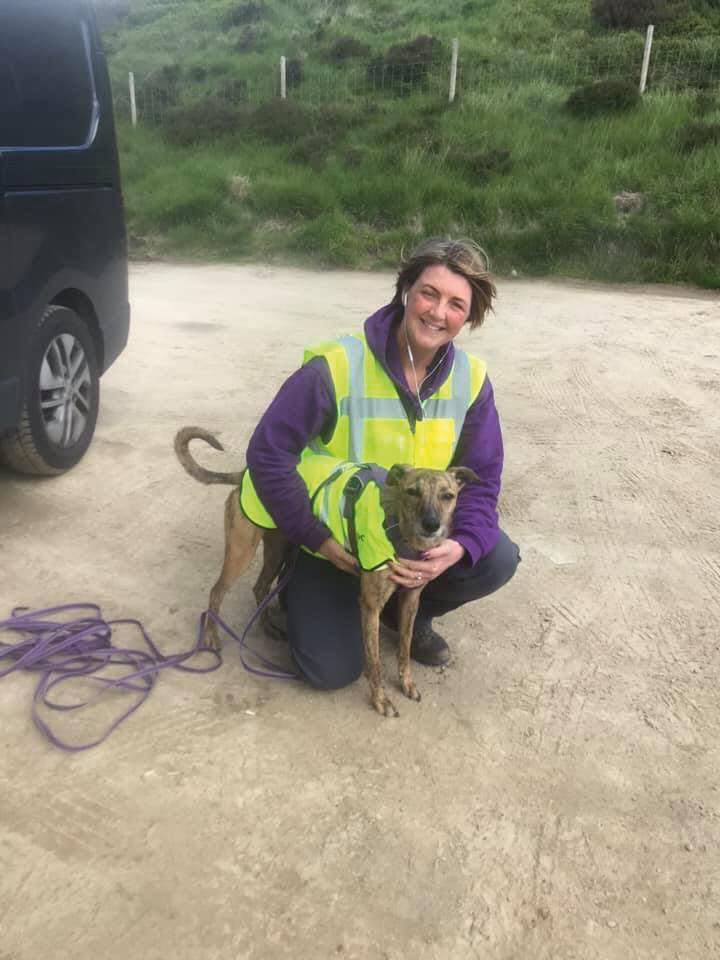 When dog trainer Claire Brown, from Huddersfield, West Yorkshire, booked onto a detection course, she ended up working with her Whippet-cross Mavis. And it was a revelation!

“She’s the most talented scent dog I’ve ever worked,” Claire enthused. The pair had trained together, but not done any searches when Claire’s friend phoned asking for help in finding her dog. Mavis came up trumps, finding the dog, and delighting Claire.

Now, Claire and a team of volunteers track down lost dogs, advising and supporting distraught owners. Claire tries to stay calm while handling her dog, but the plight of those missing their pets touches her deeply. “There’s something about the people who have lost their dogs; they have a certain look and air about them. That loss they feel, that’s the reason I  do it.” 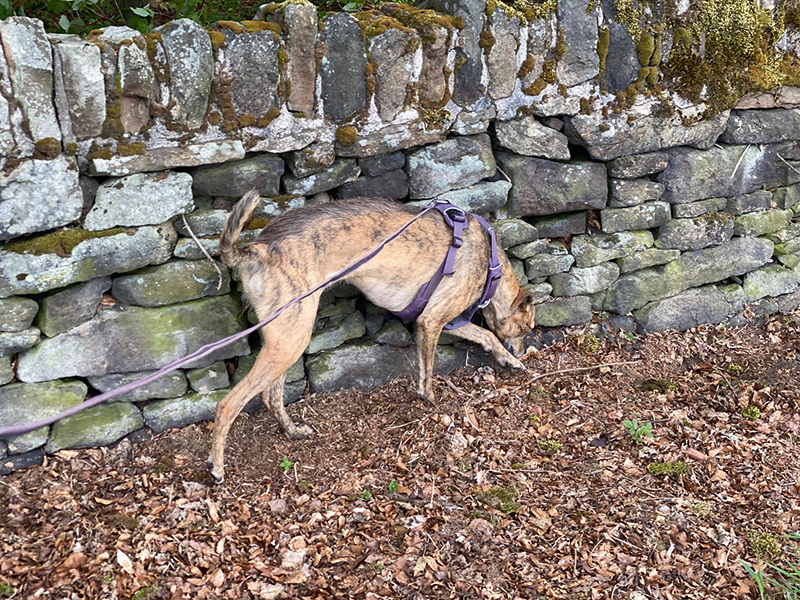 The relationship between Claire and Mavis is very special. “The dog feels like an extension of me,” said Claire. “I trust her 200 per cent on that search. If you met my dog you’d understand, because if you try to question her and she thinks she’s right, she gets very cross. She’s very methodical in her work, but she’s also very clear. She’s never let me down; she’s always right, so I have no reason to mistrust her.”

For Claire it’s all about the dogs. “The information the dogs collect and provide for us on a search, you couldn’t get it any other way so the dogs are absolute heroes,” she said.

Part of the team

Lisa Armstrong, from Huddersfield, West Yorkshire, and her dog, Clint, had tried other activities before discovering that Clint excelled at scent work. Their first active search was for a missing cat, whom they found accidentally locked in an empty house. 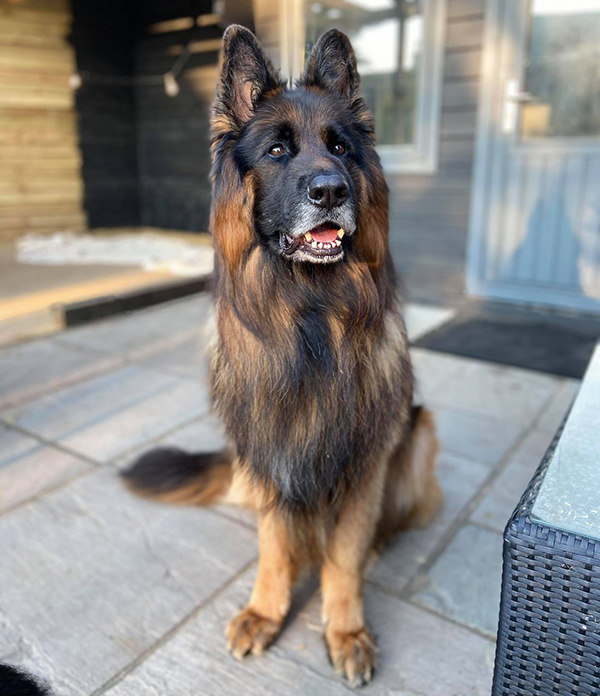 Handsome Clint did well in the show ring before discovering his love of scent work.

“My motivation for helping someone find their pet is knowing how devastated I’d feel if one of my dogs went missing; seeing the relief and happiness it creates when a person’s beloved pet is finally found,” said Lisa. “Clint actually enjoys the tracking itself. He doesn’t really know what he’s doing, but he definitely gets a buzz out of the search. The release of dopamine makes him feel good. The reward that follows — his ball or high-value food
— increases his motivation to search.

“Through repetition and reward, Clint has learned that when I put his harness on he is going to be doing something ‘good’. We set the dogs up in the same way every time they search so they know what is expected of them.

“Clint and I have worked as part of  a team, where a number of people and their dogs go out and help to track the movements of a missing pet. It’s very much a team activity and trust is a massive part of it. As humans we try to think and work out where a dog would go, and what he would do. Unfortunately, we can’t see or smell where they have gone, so we have to rely on the dog’s nose to guide us.”

● To find out more about the NorthK9 Noses Search Dogs, visit www.northk9.co.uk

Emma Hodgson sums up the experience of her son Corey’s dog going missing as ‘a nightmare’.

“Corey had set off to go to Manchester,” she explained, “and he must have skidded on the ice. The car ended up upside-down and the windscreen smashed. His dog, Mika, ran off and we didn’t know where she was, or if she was hurt.”

That nightmare went on for three days. The only bright spot on the horizon was the support Emma, from Dewsbury, West Yorkshire, and her family, received.

“There must have been 50 people out looking for Mika one night, and so many shares on Facebook — it was unbelievable,” she said.

A vital part of the search parties were the sniffer dogs, including Lisa (Armstrong) with Clint. “We took Mika’s toys and gave them to the dogs as scent articles. I couldn’t thank them enough,” said Emma. “They actually sniffed out the area where she was for us.” 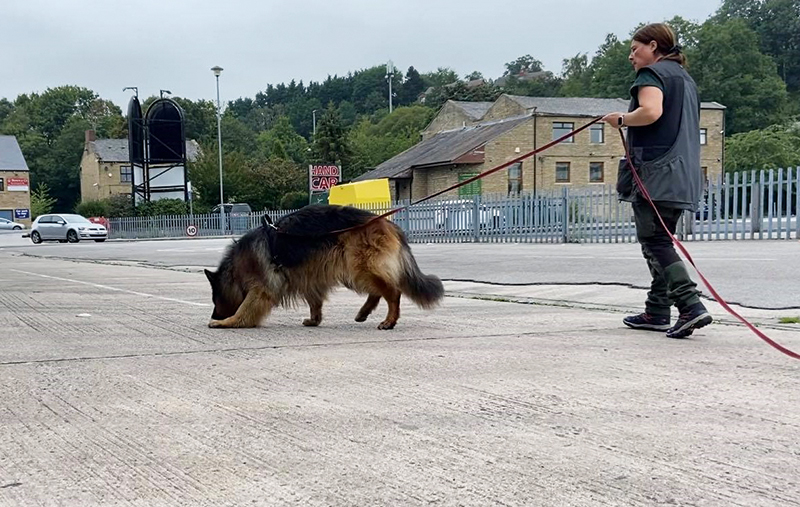 Lisa and Clint on a search

Emma was advised to put a familiar smelling object (a family member’s dressing gown) out for Mika, so that if she came back to that spot, she would hopefully stay around the area. Clint would also know, and show Lisa that Mika had indeed come back by indicating the item.

“Without the dogs we wouldn’t have had that clue, they were brilliant,” said Emma. Thanks to the dogs indicating where Mika was, she was found in a field, uninjured by the crash and none the worse for her experience. 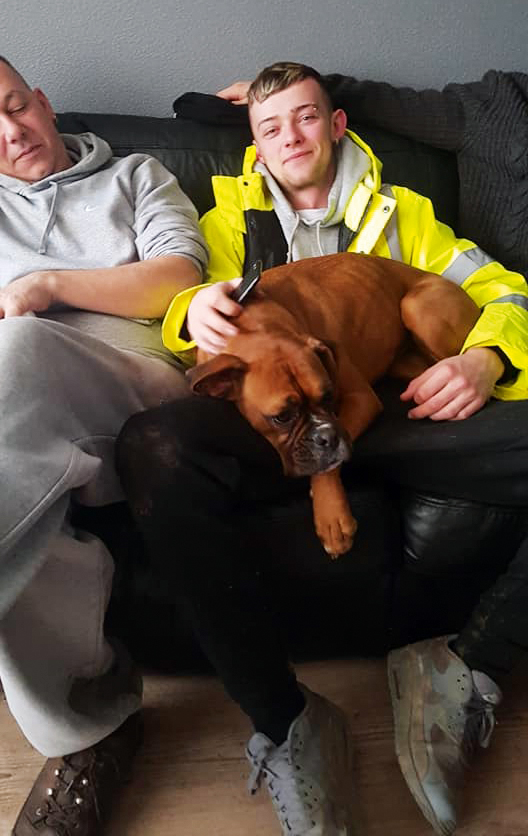 Emma’s son Corey was delighted to have his dog back safe and sound. 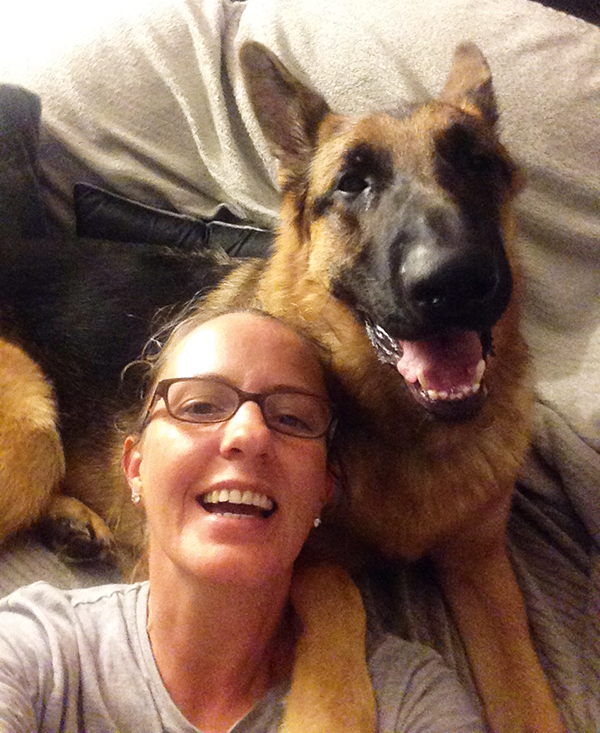 Dexter has developed into a wonderful dog since Julie adopted him.

Dexter was a troubled, nervous dog when Julie Mills, from Kirklees, West Yorkshire, adopted him. They’d only been together for three months, and were walking early one Sunday morning when disaster struck.

“Dexter was on a harness and lead and there were tons of rabbits. He saw them and he was off, gone! I was crying and screaming!” recalled Julie.

“I got in touch with Claire (Brown) and she was brilliant. She said put his bed outside, and put dirty washing on your line so there’s a scent.”

Julie was worried that because Dexter had been wearing a harness and lead when he ran off, he might have become tangled up, unable to get away. 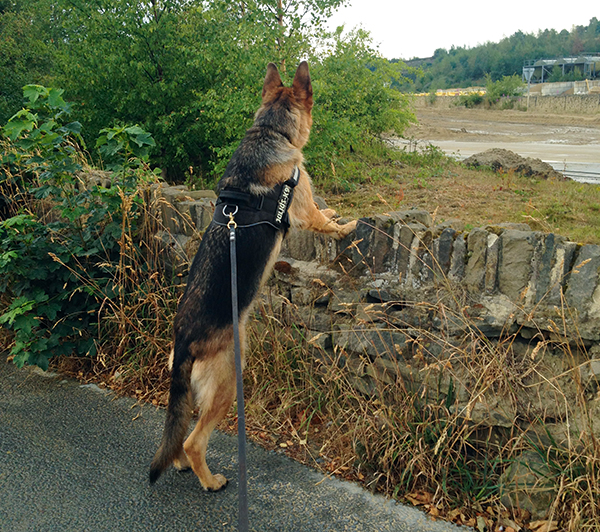 Dexter still likes to watch rabbits but no longer chases them.

The tracker dogs followed Dexter’s scent a considerable distance, then retraced their steps almost all the  way back to where he first went  missing. But just then, Julie received a Facebook notification of a sighting in a nearby quarry.

“I was in an absolute mess. I hadn’t slept,” Julie recalled. “Two other girls, who’d helped me put up posters, came with me and we asked the people at the quarry if we could bring the dogs in.

“Then, Claire and Mavis found Dexter’s scent. Little Mavis stuck her head in a bush and Dexter came out!” Julie smiled. “After getting him back I was so grateful.
I said to Claire:  ‘How much can I give you?’, but she said: ‘Just make a donation to a charity!’”

Dexter was found hiding in a quarry