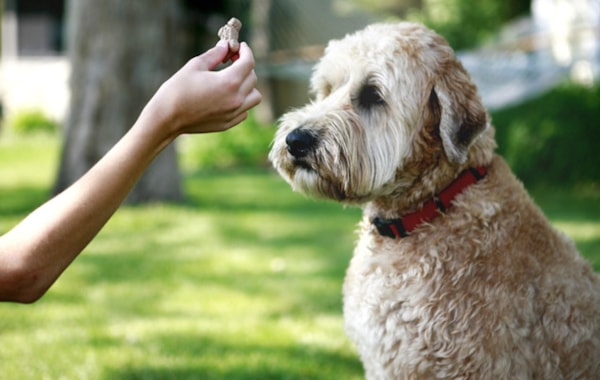 Dog tricks - teaching your dog a few tricks can be fun for you both, and gives you another way of interacting with him.

Dog tricks can also have a practical purpose, whether it's helping to put someone who is afraid of dogs at ease, or tackling obstacles when out on walks.

Keep lessons short and sweet: lots of mini training sessions are better than one long one. When teaching something new or asking for a more polished effort make sure the treat you offer is sufficiently motivational, and if using lots of titbits reduce meal sizes accordingly so your pet doesn't become overweight. Some dogs will find certain tricks easier than others; choose those which your dog is mentally and physically best suited to.

This is usually one of the first things people teach their dogs, and forms part of basic obedience training. It can also be one of the most useful things to teach your pet. A sitting dog will be less frightening for those nervous of dogs; it's an alternative action to jumping up when meeting people (and one he can be rewarded for!); always asking him to ‘Sit' before crossing a road will ensure he pauses rather than stepping straight out into passing traffic; and even if he doesn't have a great stay or recall, a well-established and ingrained sit can drop him on the spot in an emergency.

The sit is very easy to teach. Hold a tasty treat in your hand just in front of your dog's nose and allow him to smell it but not eat it. Very slowly bring the treat up and back over his head; as his nose comes up following the treat, his back end will lower until he's sitting. Once he's sitting, praise and reward him. Practise at every opportunity - not just during training sessions, but asking him to ‘Sit' before having his collar and lead put on, or before getting his dinner (which then also becomes the reward). As he gets the idea, phase out holding a treat in your hand (but not the praise and reward), and gradually begin to make your hand signal more subtle. Attach a verbal command, and practise both so he'll respond promptly to either a gesture or your voice.

Ask your dog to lie down, and then holding a treat just in front of his nose, use it to lure him forwards in a commando crawl. Move the treat slowly and keep it close to the ground; praise and reward every small movement at first, gradually increasing the distance you ask him to go until he can wriggle along on his tummy. This can be a handy trick if you come across a stile or barrier you can't lift him over while out on a walk - he can crawl under it instead.

This looks really impressive but is actually very simple to teach. Hold a small treat in each hand and stand with your feet spaced far enough apart so that your dog can comfortably pass through them. Start with your dog in front of you, and lure him through your legs by holding the treat in your right hand behind your right leg. Move it forward and around your right leg as he follows it. As he comes level with your knee, praise and reward, and then use the treat in your left hand to encourage him to move through your legs again, but this time luring him round to your left hand side.

Once he's managing a single figure of eight with confidence, begin asking him to do one and a half, and then two continuous weaves, gradually increasing the number before rewarding. This is a great exercise for increasing coordination and agility, but does require a lot of concentration, so build it up in easy stages. As he starts finding it easier you'll find he becomes faster, but don't rush him while he's still learning. As he grasps what you want him to do, you'll find you'll also be able to start straightening up and giving more subtle hand signals.

While your dog is standing facing you, take a small treat in one hand and place it right in front of his nose. Very slowly lower the treat towards the ground just between his front paws; as his nose follows it his front end will go downwards while his back end stays in the air, making it look as though he's taking a bow. Praise and reward him. Gradually increase the time he stays in the bow, and also begin moving your hand less, but continue to bend forwards - this becomes your cue, but to anyone watching it will look as though you're politely bowing to each other.

Ask your dog to lie down, and then use a treat to lure him into lying on his side by placing it just in front of his nose and bringing it slowly round towards his shoulder. When he's comfortable about doing this, bring your hand round a bit further towards his spine, and as his nose follows the treat take it a bit further still until he rolls right over. Once he's confident with rolling over you can attach a cue word just before he goes over so he begins to associate it with the action.

Take a small treat in one hand between thumb and second finger, with your index finger pointing out. Hold the treat just in front of your dog's nose and slowly use it to lure him round in a half circle, at which point praise and reward him. As he becomes adept at managing half a circle, increase it to asking him to complete a full circle before praising and rewarding. Once he's grasped the idea of following your index finger you can begin to straighten up, cueing him with a circular movement from a standing position, and gradually making it a more subtle signal.

Learning to catch a treat isn't always as easy for your dog as you might think, and it can take time for him to perfect the necessary coordination, so be patient with him if he fluffs it at first. Make your throws easy to start with, throwing upwards and towards his mouth - it helps if you use slightly larger treats rather than tiny ones. If he doesn't make much of an effort, but just lets the treat bounce off his nose and on to the floor, be ready to beat him to it and pick it up before he can eat it so he doesn't end up getting a reward for doing nothing. As he starts to get better at catching the treat, you can begin to use smaller ones and to throw them a little to the side to make it more challenging.

This requires a huge amount of self-control from your dog as well as the ability to stay motionless until you release him. Ask him to sit and gently support his chin with one hand so his nose is parallel to the ground while you place a biscuit on top of it. Use a treat which is a bit boring rather than super-tempting. To start with, gently hold the biscuit in place for a second, then remove it, and praise and reward him.

Gradually increase the time you hold the treat there, then progress to letting go of it and increasing the time you can do that, and then to briefly removing your hand from beneath his chin. Build up the time he can manage to keep it balanced on his nose, and either finish the trick by telling him ‘OK' so he can tilt his head and let the biscuit fall to the floor, or if he's good at catching, say ‘Catch' to encourage him to flip the treat in the air and catch it.

Make it look as though your dog is cleaning his face by gently sticking a Post-it note to the top of his muzzle. Most dogs will bring a paw up to wipe the annoying piece of paper off. When he does, praise and reward him and repeat, using another Post-it if he's dislodged the first one. Once he's consistently bringing his paw up to wipe his face, attach a cue word, and keep practising until he's made the association and you can do away with the Post-its. Don't use anything stickier than a Post-it note as it will stick too firmly to his fur and will hurt him when he tries to remove it.

Teaching your dog something new is a great way of keeping him mentally stimulated. Be prepared to get a little creative and imaginative yourself if a method isn't working; there's more than one way of teaching a trick, and you might find a different one more successful with your dog if he's struggling to understand what you want him to do.