Build your bond and reinforce recall while playing with your dog 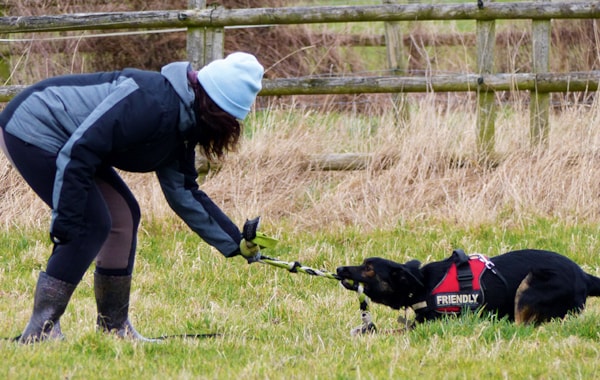 “Play is fundamental, and a powerful motivator when you’re playing the right games for that particular dog. You need to play with your dog; engage him, spend time with him.

“A lot of people interpret play as: ‘I stand at the top of the garden and throw a ball.’ The ball is hurled in the air, and the dog doesn’t even see it half the time!

“Play needs to involve movement. Keep the toy close to the dog, and move it around. If that movement simulates potential prey, it will be effective in getting the dog interested. Move the toy as though it was alive — a little, quick movement — and then stop; introduce a change of direction. Moving the toy past the dog, close to, and then away from him, like prey, makes it hard for the dog to resist.

“Play in an easy location — home — then you can begin to teach your dog to play outdoors. Get that relationship going between you, and show your dog that you’re fun and he’d rather be with you than over there with that other dog. Particularly during adolescence, dogs want to go and interact with other dogs and if you’re saying: ‘Come away from that dog and come away with me!’ why would they want to? Whereas if you say: ‘You can play — come away with me and you’ll get a brilliant game!” they’ll do it and it’s not a problem!

“The benefits for the dog are all those feel-good chemicals in their body. If you offer the right games, they’re also able to channel their natural drives. For example, giving a Jack Russell a digging pit gives them an appropriate outlet for that natural behaviour.”