Many dog lovers have discovered the benefits of using crates for their dogs, but a surprising number of owners still view them with suspicion. Julie Hill — a convert herself — finds out more.

“Don’t see it as a cage — see it as your dog’s bedroom. Dogs like to have a nice, secure space.”

And that is the crux of the issue — the way the dog sees the crate. “If the dogs are never put in there as a punishment, it’s no different to a bed,” explained Jodie.

It’s the way you introduce the crate to a dog that is so critical. Many breeders use crates, in which case puppies are familiar and comfortable with them, but what if you adopt an older dog?

Jodie advocates the same method: “I always start in the same way. I open the crate up — top, sides, doors — so there are as many exits as possible. Dogs don’t like being trapped in a situation, and going into a small, confined space that they aren’t familiar with, without any escape, can be really scary.

“I throw a treat into the crate, and I throw a treat out to emphasise they can go in, or they can go out. As they learn this and feel more comfortable, I start throwing more treats in a strategic spot in the crate that requires the dog to put his whole body in to get the treat. I use a really high rate of reinforcement to begin with — lots and lots of treats, one at a time, over and over. Then I add a release cue, such as ‘OK!’, and throw a treat out. The dog then learns that he can stay in there and when he hears the word ‘OK!’ he can come back out again.

“When I’m teaching crate training, I never close the doors to start with, because I feel like that breaks the trust. I want the dogs to love being in there. With my own dogs, I can send them to the crate and not close the door. Then I can do whatever I want around the house and they will stay there until I release them, because the barrier is in their minds as opposed to physically being there. It’s called boundary training.” 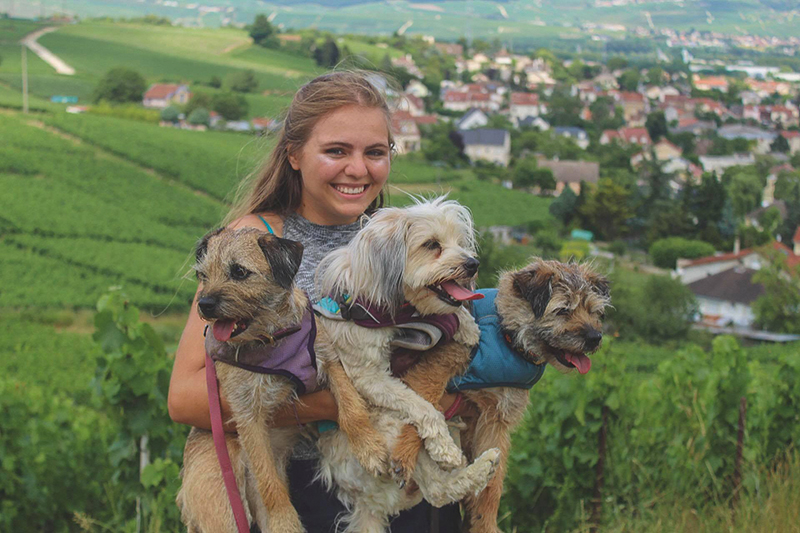 Jodie Forbes with her dogs Bramble, Tulip, and Hazel.

Jodie has an easy way to encourage dogs to relax in their crates. “I get a Kong and put a rope through it — something the dog’s not going to swallow — and tie it to the crate on the inside. Tie it nice and low so the dog has to be lying down inside the crate to eat it. This is a really good way of practising settling in the crate. There’s a real difference between a dog doing a ‘down/stay’ in a crate, and actually settling.

But, she added, it’s vital to note that while a crate can help prevent separation issues developing if the dog feels secure in the crate, simply forcing a dog with separation anxiety into a crate will only exacerbate his panic.

Additionally, crates can be a safe haven during a party or at other busy times, help with toilet training, offer familiarity when away from home, ensure safety in the car, calm dogs who become anxious on firework night, and even provide a more efficient exit in the event of a fire — especially if firefighters have to enter your house while you are absent or injured. Popping a puppy in a crate, with lots of praise and distraction toys, can preserve an owner’s sanity — or at the very least patience! — but does a crate have a role for adult dogs? 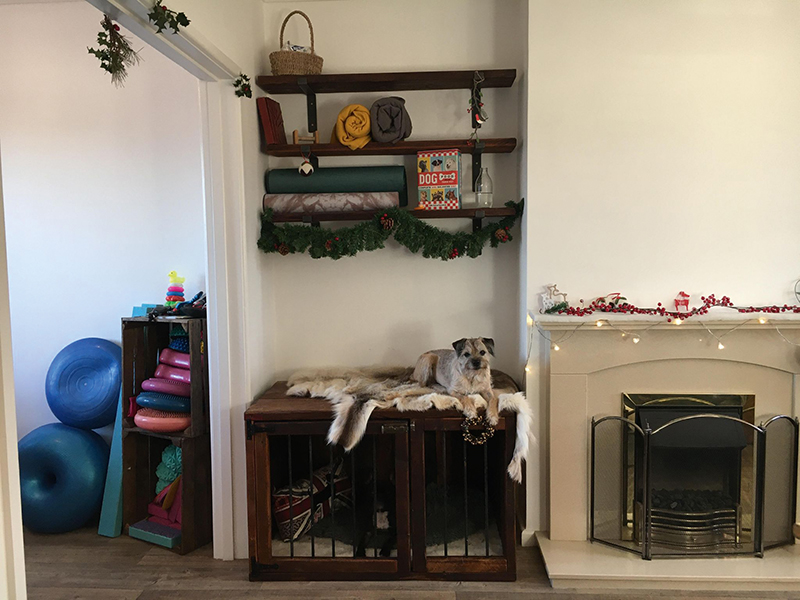 Jodie has had crates built into her house that look beautiful as well as being functional. 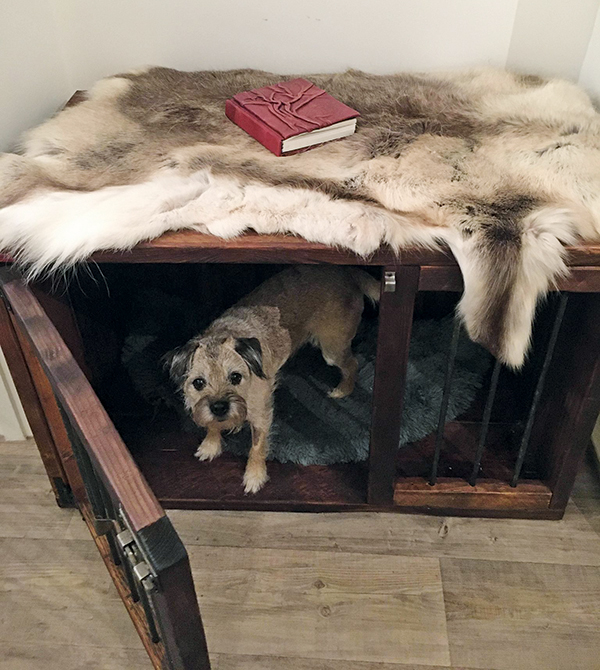 On the safe side

“If you have a multi-dog household, I would always have one crate out just in case,” Jodie advised. “You might never use it, but things happen — maybe you have a female and a male and the bitch comes into season, or maybe you have two males and they start fighting, or one of them starts resource guarding.

“It’s important to get a crate in which the dogs can stand up, turn around, and stretch out  — but not so huge that it’s like a whole room to them. I would get a divider if your dog is going to grow significantly bigger than he is as a puppy.”

Safety is the other essential consideration. “It’s really important that your dog can’t injure himself,” Jodie added. “Make sure you go for a crate that’s going to be strong enough for your dog; a lot of them nowadays are made quite cheaply and the bars can be bent. Go for something sturdier that may be a little bit more money but is less likely to injure your dog.”

So, to get the most out of crates — think outside the box! 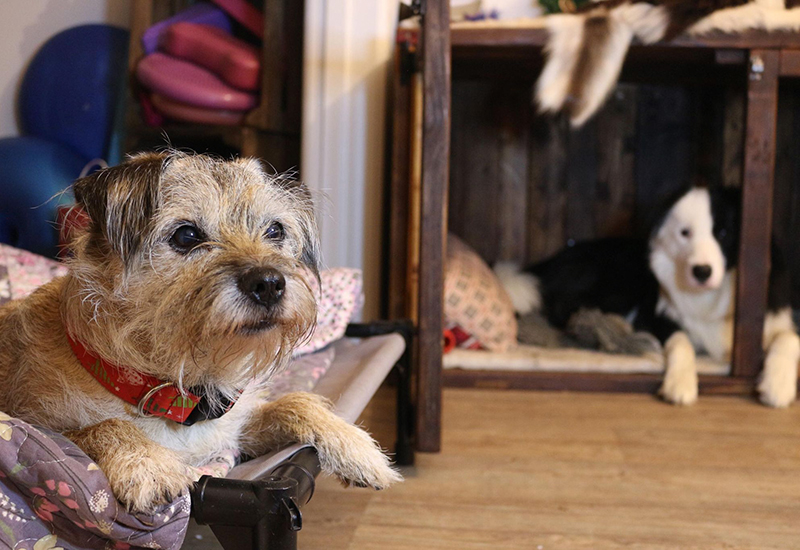 Crates can provide a safe haven for dogs who need a bit of time out.

The race for the crate!

“We use crates for all sorts in our house,” said Julie Botterill, from Manchester.

Currently, Julie shares her house with Marshall, a rescue German Shepherd Dog, who can only sleep in a crate, and struggles to relax and switch off anywhere else. Her Barbet dogs Zelda and Mousse, Norwich Terrier Pixie, and Chinese Crested Dog Giraffe, also love their crates. However, they have competition from Main Coon cats Mogwait and Megatron, and pet chickens Sebby and Grover who are also partial to some crate time.

“In years gone by, we had a house chicken and five dogs, and four crates,” said Julie. “The smallest was always the most popular, and every evening when the animals knew we were starting to think about going up to bed, there
would be a race and scrabble for that crate and it often had five dogs and a chicken inside.

“Our recent litter of Barbet puppies started to learn to settle in a crate from four weeks old — just spending
a couple of minutes inside initially with a treat mat, building up to longer — to help build their resilience and coping strategies for when they joined their new families and homes.” 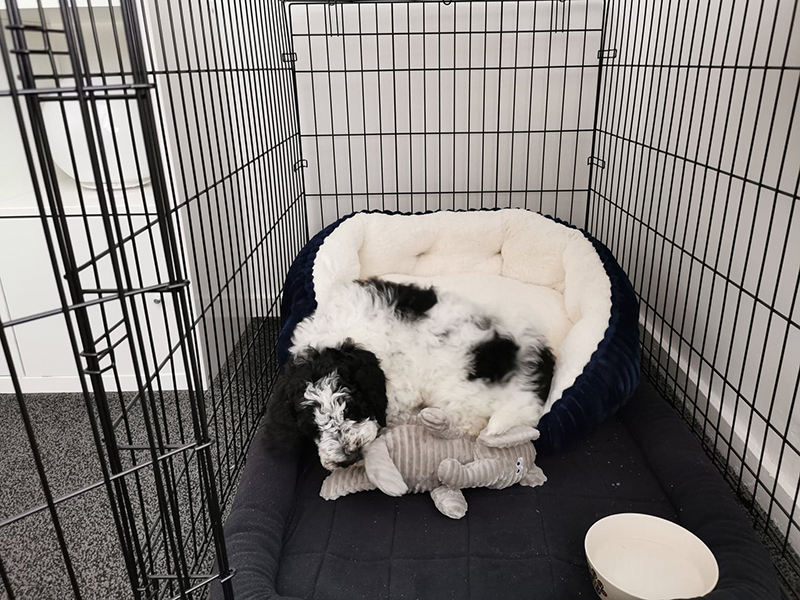 Julie has made sure her Barbet puppies have become accustomed to crates. 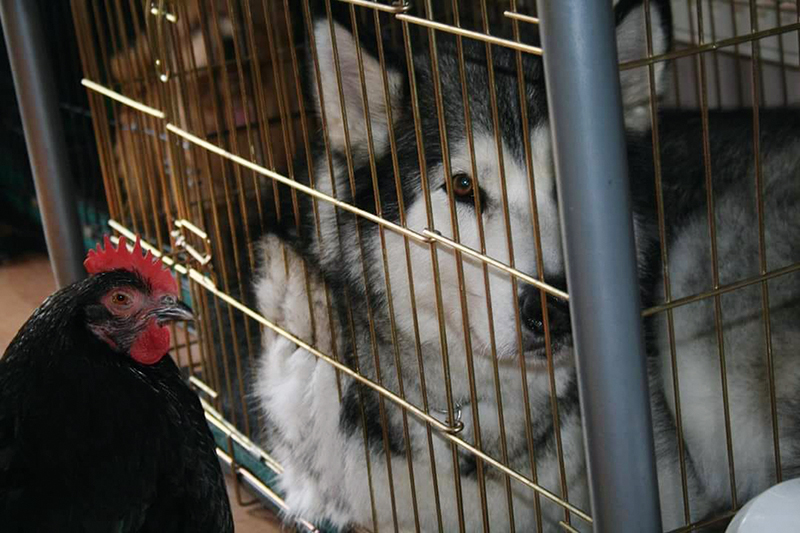 In the past, all Julie’s animals made a beeline for the smallest crate, including the house chicken!

When Joe Nutkins, from Clacton-on-Sea, Essex, first encountered crates, she didn’t take to them. “Viewing them as cages, I initially felt they must be something dogs would hate. I really didn’t understand why anyone would put their dog into a cage!”

It wasn’t until she trained to be a dog trainer that she saw crates’ potential. “We needed to take our own dogs to training but crate them between classes. I borrowed a crate and worked with my Norwich Terrier, Cassie, on teaching her what the crate was for. She was three years old and a little bemused at being confined at first, but to my surprise she took to it really fast! It wasn’t long at all before she was taking herself into the crate and napping inside.

“We use covers on our crates to make them cosy, and to help them blend into the room better, so they stay up permanently and you hardly notice them. It means that when one of our dogs  is in season it is easier to keep  them separated.

“When we go away in our caravan we take crates, so they’re there if the dogs want them. When we’ve had visitors with children, who the dogs aren’t used to, the dogs will take themselves to a crate. I make it a clear rule in our home that the dog crates are not to be approached by children, so the dogs have a nice peaceful place to go!” 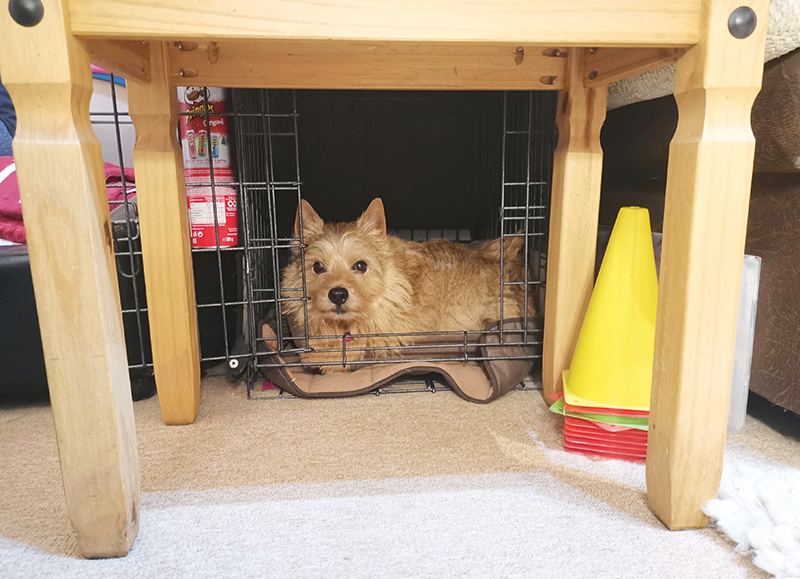 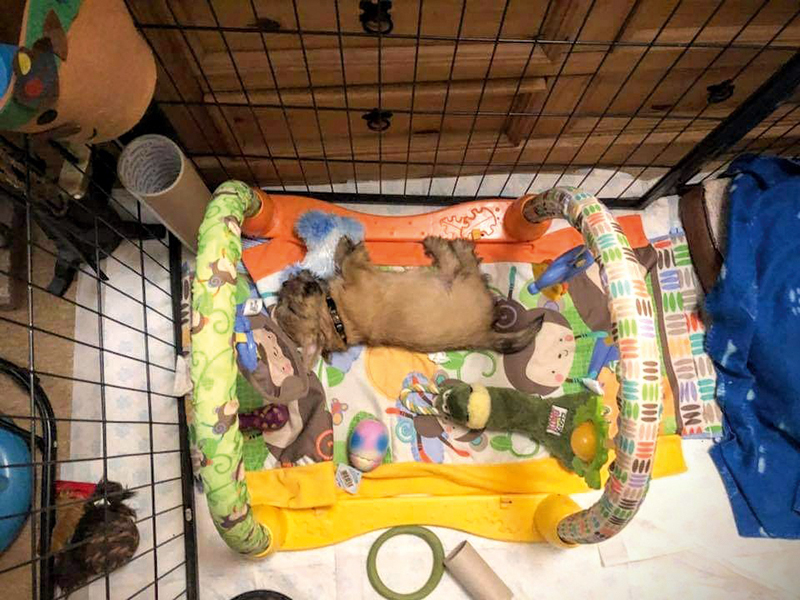 ● Don’t expect your dog to be trained to accept a crate in one session.

● When dogs sleep, their brains process what they’ve learned.

● Remove a dog’s collar before leaving him unsupervised in the crate.

● Make sure anything in the crate is safe for the dog.

● Ensure bar gap size is appropriate for the dog.

● Get the right size of crate for your dog.