Why does my puppy yelp at bedtime? 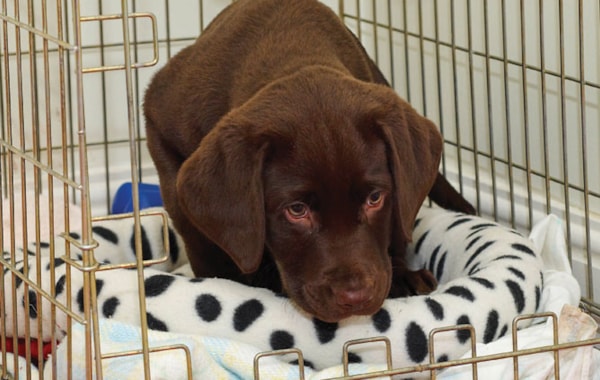 Puppies can often become distressed at night when they are left alone, as Claire Arrowsmith explains...

(Q) I have just got a new puppy. She is fine until bedtime, when she will whine continually. I've tried leaving her but the whining then turns into yelps. She sounds so distressed that I give in and she often ends up in my bed. I know I shouldn't have let this happen, but hearing her sound so distressed really upsets me. How should I tackle this? She has a puppy crate.

(A) Behaviourist Claire Arrowsmith says: This is a common concern for new puppy owners. They often become distressed at night when they are left alone for the first time, away from their littermates. Since their distress is so apparent owners often respond in the way you describe. It then becomes a hard habit to change as the puppy knows that crying and whining eventually brings you to them.

Now that your puppy is used to sleeping near you I would recommend that you set her crate up near to your bed. If she is near you then she should settle and learn to sleep in her crate without becoming overly distressed.

Over time you will be able to gradually move her crate out of your room and into the most appropriate place. Doing it this way should allow you to avoid further trauma to your puppy and hopefully get some unbroken sleep.