Choosing a name for your dog 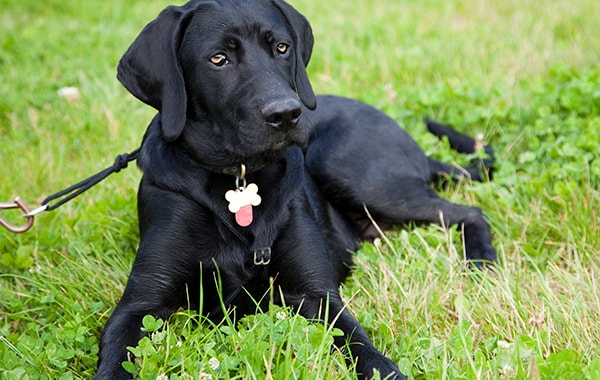 Naming your dog is one of the most important aspects of welcoming him into your family, as Karen Bush explains...

Deciding on a name for a new dog can be fun, but not always easy — and it can say as much about you as it does about your dog.

How to choose a name for your dog

Agree on a single name for your new puppy or dog with all other family members. If possible, choose a name before he arrives home, as temporary nicknames have a habit of sticking! A short name is easier for your dog to learn, and for you to call.

If your new puppy or dog already has a name, but you don’t like it, it is fine to change it — there are no unlucky superstitions attached to doing so, as there are with horses!

If you are taking on a rescue dog with an unknown history, or who is suspected of having been abused, a change of name may even be a good idea. As well as reflecting a fresh start, a new name will not be associated with any punishment, fear, or trauma he may have experienced previously.

Most dogs, of any age, can learn a new name easily — simply follow the steps right.

When not to use your dog’s name

It’s important to create positive associations with your dog’s name, so don’t use it in a cross or exasperated voice, or in connection with anything he views as unpleasant, such as calling him to you to be given medication.

Don’t continually call his name just for the sake of it either, or he will start to ignore it.

Teaching your dog his name

Having decided on the perfect name, you then need to teach it to your dog. Along with toilet training, this is pretty well the first part of any formal training you do with him — and if you have more than one dog, it will help in differentiating between verbal cues given to each.

Whether taking on a puppy or an older rescue dog, the process is the same:

The oldest known dog name known is the tongue-twisting Abuwtiyuw (pronounced ‘Ah-boo-tee-oo’), which loosely translates as Pointy Ears. Belonging to a royal servant in ancient Egypt 4,500 years ago, this sight hound was given an impressive funeral, with his name engraved on a limestone slab.

The inscription also relates how it was ordered that he be given a coffin from the royal treasury, fi ne linen in great quantity, incense, perfumed ointment, and a specially built tomb.

Other ancient Egyptian dog names have been found on excavated collars, monuments, and carvings. They include names such as Reliable, Brave One, Good Herder, North Wind, Antelope, and even Useless — although hopefully meant in an affectionate way!

Trends in dog names come and go. According to animal charity, Blue Cross, the names currently in vogue are: 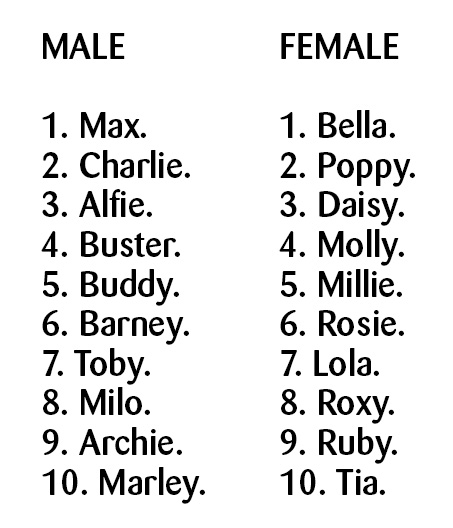 Finding inspiration for your dog’s name

Stuck for a name? Inspiration can be found all around you: there are books of doggy names, and many online sites are stuffed with suggestions. With recent years seeing an increase in human names, reflecting the way in which dogs are often regarded as fully fledged members of the family, you’ll also find plenty of choices in baby-naming lists too.

Alternatively, you might choose from characters in favourite books, films, or TV shows — Sherlock, Watson, Frodo, and Arya are apparently all gaining in popularity. But not all heroes to name your dog after need be fictional: Dogs Trust Manchester named two homeless hounds after gold medal-winning Team GB cyclists, Laura Trott and Jason Kenny.

Although Fido, Rex, and Rover are rarely used these days, they remain a generic ‘everydog’ name, like Joe Bloggs or John Doe for humans. Fido is Latin for ‘faithful’, and probably dates back to ancient times.

Abraham Lincoln owned a dog called Fido. As the first presidential dog to be photographed, his name became popular in the USA as a result of his fame. Another famous Fido was an injured stray Italian dog, adopted during the Second World War by factory worker, Carlo Soriani. After being nursed back to health, Fido lived up to his name by accompanying his owner to the bus stop every morning, and waiting there to greet him on his return each evening.

One day, Carlo failed to arrive, having been killed during a bomb attack, but Fido continued to wait for him every evening for the next 14 years, right up to the day of his death.

Rover was a common name for hunting dogs in both Britain and the USA during the 18th century. Undeterred by the male nature of the name, George Washington allegedly had a dog called Lady Rover. In Britain, the name was further popularised among pet dogs by a 1905 short film, ‘Rescued by Rover’. Six-and-a-half minutes long, it was the first film to star a dog.

Rex is another Latin name, meaning ‘King’: Rex the Wonder Dog appeared in a 1950s comic strip, while another Rex was a famous canine actor in the 1920s.

Over 250,000 dogs are registered with the Kennel Club each year, but you don’t need to have a pedigree to boast of an impressive-sounding official name. As well as a Breed Register, the Kennel Club also holds an Activity Register, and if you want to enter KC-licensed events, such as agility, flyball, obedience, heelwork to music, and cani-cross, you’ll need to register your dog’s special show name here.

This is where your imagination can run wild — although it must consist of more than one word but not be more than 24 letters long. If those sort of classes don’t appeal, there is always the Companion Dog Register to sign up to. Find more details at www.kennelclub.org.uk