How should my dog travel in the car? 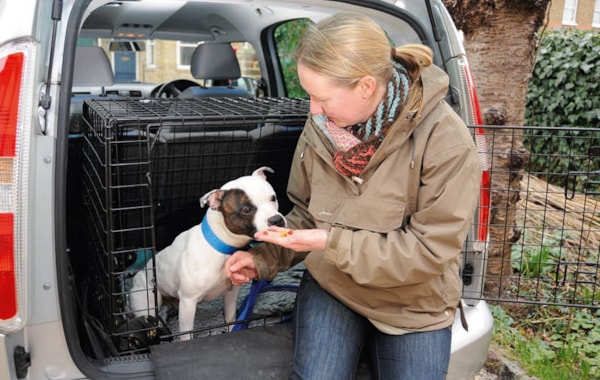 Tips for travelling with your dog in the car: It's important that you make sure your dog travels safely in the car.

Keeping your dog and your passengers safe in the car isn’t necessarily as straightforward as it seems. Karen Bush and Toni Shelbourne advise.

Automatically fastening our seat belts when travelling in the car seems to be second nature to us humans, but, when it comes to our dogs, it’s often a different story.

Rule 57 of the Highway Code states:

“When in a vehicle, make sure dogs or other animals are suitably restrained, so they cannot distract you while you are driving, or injure you, or themselves, if you stop quickly. A seat belt harness, pet carrier, dog cage, or dog guard are ways of restraining animals in cars.”

Rule 57 of the Highway Code is a guideline, rather than a law, but driving with an unrestrained pet could lead to you being charged with a number of offences, and the code can be used in evidence, in any court proceedings under the Traffic Acts, to establish liability. Charges of driving without due care and attention or, more seriously, dangerous driving, caused by being distracted by your dog, could result in a fine of up to £5,000, from three to nine penalty points on your licence, and even disqualification and a custodial sentence.

That’s not all either, as failure to comply with the Highway Code’s guidelines are likely to invalidate your car insurance, and may lead to it becoming difficult to obtain insurance with any other company.

Restraining your dog in the car

Apart from preventing your dog from interfering with, or distracting the driver, suitable restraint can also help prevent injury caused to passengers in the event of a collision; a loose pet can be thrown forwards with potentially killing force.

There are a variety of ways in which you can contain your dog in the car. None is perfect and all have both good and bad points, which you will need to weigh up when making your choice.

How well (or otherwise) your dog travels in the car, as well as his size, the type of vehicle you have, and the depth of your pockets, may also be a deciding factor.

Placed behind front or rear seats, these are designed to block off a section of the car.

Available in a wide variety of shapes and materials, a small or medium size will fit on the back seat of most vehicles. You may need to fold the rear passenger seats forward to fit a larger crate in. Crates should be large enough to allow your dog to stand up, lie down, and comfortably turn around.

Small crates are safest placed on the floor behind the front seat; larger ones may need to be secured to keep them from sliding around, so will need to be of sturdy construction. Introduce the crate in your home first, where your dog is most relaxed and confident. If he’s already accustomed to using a crate indoors, don’t assume he’ll automatically accept it when it’s placed in the car. Although you may be able to skip the ‘at home’ step, repeat the introductory procedure with it in the vehicle.

A Dog's Trust survey revealed that:

A car harness fits like a regular harness, but should be manufactured to withstand the impact of a car accident. It should fi t well, and any tether attaching it to the car’s seat belts should be as short as possible to reduce the distance a dog is thrown during an accident.

Introduce slowly and in careful stages, even if he is already accustomed to wearing a harness when out on lead walks.

Do your research before travelling with your dog in the car

There is no completely safe or perfect way of travelling dogs in cars, and most restraint products are more concerned with keeping the human occupants of vehicles safe, rather than minimising the risk of injury to your pet in the event of an accident. Some systems and designs are better than others, so do your research, and shop carefully with that in mind.

Ideally, choose a product that has been proven effective in crash tests, but bear in mind that some manufacturers can be creative with the truth. It may have been ‘safety tested’, but how rigorous was it— and did it pass? When the Center for Pet Safety in the US conducted canine car harness tests in 2011, and again in 2013, out of 11 brands making claims of ‘testing’, ‘crash testing’, or ‘crash protection’, all but one was deemed to have sub-optimal performance, with a few even experiencing ‘catastrophic failures’.

Don't travel with your dog…

An effectively restrained dog, who is barking, whining, drooling, or projectile vomiting, can be just as much of a dangerous distraction for a driver as one who is loose and ‘boinging’ around the car. It’s not nice for you or your passengers — and it’s pretty certain your dog is only behaving that way because he’s not very happy either.

Putting a little effort into determining the cause of his distress, so you can remedy it, and if necessary put some travel training in place, is just as important an investment as a suitable car restraint.

Always travel with a basic kit in case of accidents. Make sure it contains newspaper, paper towels, and some plastic bags.

On longer journeys, give your dog access to fresh drinking water and take regular breaks to let him stretch his legs and relieve himself. Never exercise your dog on the hard shoulder of the motorway. Check your route beforehand and make a note of service areas; many provide pet-feeding stations offering fresh water.

Never leave your dog on his own in the car. If possible travel in the morning or early in the evening when it is cooler. It may look entertaining, but do not allow your dog to stick his head out of a car window when you are driving. Not only could he be injured by passing vehicles, but dust and loose particles could cause damage to his eyes and ears.

Check that your breakdown service will allow your dog to travel in the cab with you if your vehicle needs to be towed. Both the AA and RAC advise customers to inform staff that they have dogs with them when they report a breakdown. Whether the dog will be allowed in the cab will be at the discretion of the driver.